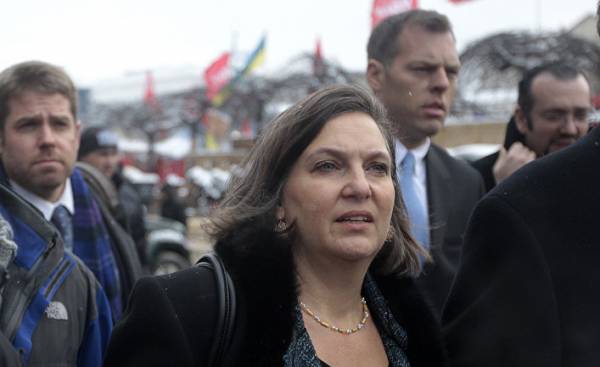 In advance of Russia’s intervention in the presidential elections in 2016 has caused in the United States, the surge of indignation. The investigation follows the investigation. Moscow’s behavior was the main pretext for the law on sanctions just adopted by the Congress. Some politicians and journalists argue that the actions of the Putin government would be considered an act of aggression. One of the congressmen even went so far that directly compared the incident with pearl Harbor and September 11 attacks.

These indignant statements would be far more credible if the United States did not behave in the same way. However, as is shown by historical experience, Washington in the past interfered in the internal Affairs of dozens of countries, many of which were democracies. A typical example of this we have seen in Ukraine in 2014, during the revolution of Euromaidan.

Ukrainian President Viktor Yanukovych was objectionable. Won the election in 2010, he began a flagrant way to use the tools of state power to benefit his own party. His arrogance and incredible scale of corruption under his rule, recovered against him a significant part of the population of Ukraine. In addition, the Ukrainian economy when it stagnated, more and more trailing from Poland and other Eastern European countries, who spent a full-fledged market reforms. Against this background, social discontent, Yanukovych has continued to grow. When in late 2013, he rejected the proposed European Union Association agreement, preferring it to the Russian proposal, the furious demonstrators filled Kiev’s independence Square (aka Maidan), as well as area many other cities.

However, for all his human and political faults, Yanukovych was legally elected according to voting results, as recognized by international observers relatively free and fair — and this is almost the highest level for countries not included in the number of Mature Western democracies. Respect to democratic institutions and procedures required to allow him to retain power for the entire statutory period that ended in 2016.

However, neither the Ukrainian opposition, neither Washington nor its European allies did not think so. On the contrary, Western leaders have made clear that they supported the desire of the protesters to get Yanukovych to change course and approve the agreement with the EU — or, if he do not, to remove the President from power before the expiration of his term of office. The Republican Senator from Arizona John McCain (John McCain), Vice chair of the Senate Committee on armed forces, went to Kiev to demonstrate their solidarity with the Euromaidan activists. McCain dined with opposition leaders, among whom were representatives of the far-right party “Freedom”, and then appeared on the podium during the mass rally on the Maidan. While beside him stood the head of “Freedom” Oleg Tyagnibok.

However, compared to the acting assistant Secretary of state for Europe and Eurasia Victoria Nuland (Victoria Nuland), McCain’s actions were a model of diplomatic restraint. To the extent that, as was aggravated by the Ukrainian diplomatic crisis, Nuland and her subordinates more openly supported opponents of Yanukovych. Speaking on December 13, 2013, the Fund “USA-Ukraine”, Nuland said that in the weeks since the demonstrations began, she has thrice visited Ukraine. Moreover, on December 5, she personally came to the Maidan to Express support for the demonstrators and giving them cookies.

The scale of intervention of the Obama administration in the internal Affairs of Ukraine of the imagination. Russian intelligence intercepted a phone call in which Nuland and the US Ambassador to Ukraine Geoffrey R. Pyatt (Pyatt Geoffey) discussed in detail, who they want to see in government after the departure of Yanukovych. The recording of this conversation handed Russian foreign press. The number of approved America candidate was Arseniy Yatsenyuk, who eventually became Prime Minister when Yanukovych was overthrown. Nuland enthusiastically said Payette on the phone that “Yats” was the best person for the job.

These plans Nuland and Pyatt were built, when Yanukovych was still the legitimate President of Ukraine. Moscow: diplomats from a foreign power-the one that says so much about respect for democratic procedures and other people’s sovereignty-talk about the removal of the legitimately elected government and replacing her with those who, like Washington.

Washington is not just constantly intervened in the events — sometimes his intervention is almost turned into manual control. During the conversation, Nuland, Pyatt mentioned the complex relationship between the three key opposition leaders — Yatsenyuk, Oleg Tyagnibok and Vitaly Klitschko. And Pyatt, Nuland didn’t want to see in the interim government, Klitschko and Tyahnybok. They were scared when the extremists Tyahnybok and Klitschko, they, apparently, wanted to bring in the power later, on a longer term basis. “I don’t think the call needs to be in the government. In my opinion, there’s no need,” said Nuland, adding that Yatsenyuk would be better if “Cry and Tyahnybok will remain outside”.

The two diplomats also were willing to expand the already
active U.S. involvement in the Ukrainian political chaos. Payette directly stated: “We want that the process was attended by the figure of international scale, capable of contribute to that [regime change]”. Nuland is clearly seen in this role of Vice-President Joe Biden (Joe Biden). She noted that she deals directly with the Vice President’s adviser on national security. According to Nuland, she told him that his head will probably need tomorrow, “to praise and to present concrete conditions.” “Biden is ready for it,” added assistant Secretary of state.

While the Obama administration and most of the American media have portrayed the Euromaidan protests as a spontaneous popular uprisings against corrupt and brutal power.
24 Feb 2014 the Washington Post in its editorial welcomed the demonstrators of the Maidan and the success of their campaign to overthrow Yanukovych. “The process was democratic,” concluded the newspaper, and now the “Pro-Western Kiev control of the party.”

Meanwhile, to pretend that the Ukrainian people without any external intervention decided to rebel against the government, would be monstrously to distort the facts. A telephone conversation Nuland and Payette and many other sources indicate that the United States was not in this story, a mere observer. On the contrary, American officials directly interfered in the events in Ukraine.

Of course, this behavior was absolutely inappropriate. The United States had no right to try to control politics in another country — and especially in the country, located on the border of a great power. It is not surprising that Russia negatively reacted to the unconstitutional overthrow of the legitimately elected Pro-Russian government that took place not only with the blessings of Washington, but, apparently, with American help.
This episode, like a number of stories related to events in Italy, in France and in other democratic countries, it is important to remember every time American politicians once again begin to publicly indignant about the alleged Russian interference in the American elections in 2016. You can discuss certain aspects of Moscow’s behavior — and it would be legitimate, but from the American moral indignation definitely reeks of hypocrisy.