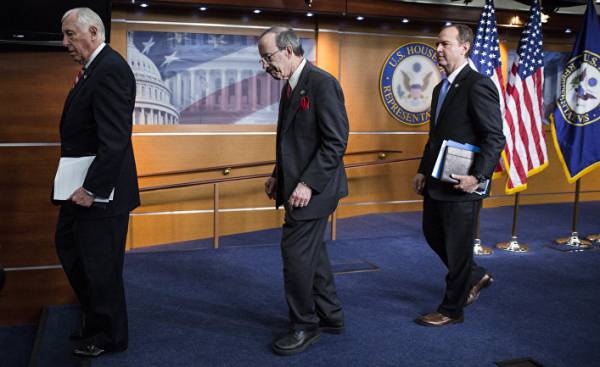 If there is something, in what is now the unanimous opinion of the vast majority of politicians and experts in Moscow and Washington is the fact that the current crisis in U.S.-Russian relations are rapidly growing in nature, is systemic in nature, and the prospects for its resolution postponed. The rest of the discourse is a throwing between statements about who is to blame and what to blame, and explanation of, how justified are the sanctions the US or how an asymmetric response of Russia.

In Moscow largely self-perceived hope for a pragmatic, interest-based cooperation in the new U.S. administration is gradually developing into a weariness from the United States. While the Kremlin is actively discussing how to confront the political, economic and perhaps geopolitical consequences of what he considers “rampant Russophobia” Washington, the expert community was divided in opinion, trying to understand what could make the US President to stop a new wave of sanctions. Most share the opinion that the President trump is simply not able to do anything constructive, given the “witch hunt” being waged against him and members of his team in connection with the investigation of “Russian Affairs”. Others believe that he just resigned with Congress, going to his side to find a serious justification for its inaction in the normalization of relations with the United States. In addition, the sanctions largely contribute to the realization of his goal is to return America to its former greatness (“make America great again”), which among other things include an increase in the export of American gas to Europe and the buildup of American military power. Both camps agree that a President trump — consciously or under pressure — made a serious mistake by passing the formation of foreign policy of Russia in the hands of Congress, which demonstrates the commitment to take a tougher stance towards Moscow.

For the legislative branch of government, Russia has become a means of reconciliation, smoothing contradictions to seemingly fragmented Congress. In voting on the issue of sanctions and the Senate and the House of representatives has demonstrated a rare unanimity on the background of the debates in both houses for the abolition of Obamacare or tax reform. Sanctions just noticed Angela Stent (Angela Stent), “exclude freedom of action and leverage, which would benefit from the President relations with Russia,” but it’s not just that — in the eyes of Russians trump is gradually losing control of key decisions, loses political weight and becoming more inability. The law on sanctions, among other things, are a sign that lawmakers still do not trust the President and I want to play it safe, depriving him of any hypothetical possibility to make concessions to the Russians. This, in turn, eliminates the possibility of a number of concessions and proposals, which the Kremlin has been willing to discuss with the White house six months ago.

Another important for Moscow, the conclusion related to the sanctions, was how this would affect the conflict in Ukraine. If the first wave of sanctions were aimed at punishing Moscow for its actions in Ukraine, the grounds for the introduction of a new package of sanctions seems to depend on the competition between Russia with the United States in the field of energy and arms sales. Many representatives of the Russian leadership believe that Washington is not really interested in the implementation of the Moscow Minsk agreements and their implementation hardly will affect the sanctions.

In other words, those who originally believed that Moscow has almost no incentive to cooperate in resolving the conflict in Eastern Ukraine, is now even less interested in resolving this conflict in any other terms but their own. The potential US response in the form of arms supplies to Kiev would strengthen pressure on Moscow, which ultimately would have to retaliate. This is undermined by vague prospects develop bilateral us-Russian program of settlement of the conflict in Ukraine and is regarded in Moscow as opposition to the work of the contact groups and the failure of the “Normandy format”, despite its own shortcomings.

More broadly, Russia and the United States are now in a situation where the opposition may take such a turn, to predict difficult, if not impossible. Action and reaction with the asymmetry becomes so meaningless that it is not quite clear whether the full extent of the policy of rushing to apply the policy of “carrot”, understand its consequences. If, perhaps, they understand it, then our perspectives are, I think, even more unenviable.

It is important also that sanctions (and the subsequent response of Russia, as well as the likely actions of the administration in response to Russian countermeasures) change the paradigm of Russian-American relations. It is possible that the two superpowers are now doomed to conflict with each other in a field where almost no opportunity for reasonable dialogue. “Managing confrontation”, which in the last few months offered in both countries as a modus Vivendi, and the supporter of which was myself, apparently, already too out of date. In fact, Moscow and Washington, some influential politicians, eager to let off steam and are ready for confrontation out of control.

The harsh truth, to which Moscow was already beginning to get used to, is that about the lifting of sanctions in the foreseeable future cannot be considered. But sanctions — even though they are painful for the Russian economy do not give the United States what they were originally conceived. Russia’s behavior will not change. Possible sanctions than-complicate the life of Russians and make it more painful, but the mode will not change. On the contrary, sanctions can contribute to a strengthening in the Russian society of anti-Americanism and the steady substitution of us goods (on the Russian Central TV channels instead of Hollywood movies already show Russian TV series and French movies). However, the choice in favor of isolation is precisely what Russia lost due to sanctions, so one of the challenges facing Putin, will be to find the necessary balance.

Sanctions constitute the beginning of a new stage, which will probably entail a further reduction of us-Russian contacts at all levels. The sanctions will also lead to reduction in the number of (joint) programmes and a more active swelling, “information bubbles”. Today the Russians do not understand why the topic of the Kremlin’s interference in elections in the United States caused a strong reaction in Washington. Most of them believe that accusations of meddling in the elections are fake. And those who still recognizes the “hand of Russia” does not see anything that goes beyond the usual foreign intelligence activities, which, in the words of one Kremlin official, “the United States take against Russia in the first years after the collapse of the Soviet Union through a variety of public organizations, political advisers and secret diplomatic channels”. “Don’t be Putin himself is a puppet of Yeltsin, it would be quite logical if he began to investigate US interference in the Russian elections of 1996,” said the official.

Russia attacked for trying to find “access points” to the new administration, and further subjected to public exposure and otherwise used it to their advantage, because this country is “a common enemy” for the American political elite. This perception of the problem Moscow has deep roots, and over time it can increase. Similar — if not stricter — rhetoric are formed and in the United States, and will remain so for years to come. It is possible that over time we can learn that the same did and other foreign political forces, although in other ways.

At this stage is not so important whether Russia is able to find an option tough response to sanctions, which will allow her to save face, will be painful for US and will be welcomed by third parties observing the conflict. It’s likely these measures will take, and if they do, then eventually all measures, other than expulsion of American diplomats from Russia, in varying degrees, be to Moscow is equivalent to shot yourself in the foot. Sanctions are an effective punitive measure, the use of which the United States, in their opinion, can afford because they are in almost all respects superior to any of the opposing countries. But as the number of countries that fall under U.S. sanctions, is growing, and more countries must support these sanctions in accordance with their obligations as allies, this practice is considered dangerous. More and more people in China, Turkey, India and Russia urged to unite to confront the sanctions, which over time can undermine the international reputation in the America and force the country to turn away from US.

When Russia is seeking to resist external pressure (judging by the way she acted in such cases in recent years), it usually raises the stakes. The expulsion of American diplomats — in order to align the membership of the U.S. mission in Russia and the number of diplomatic personnel of Russia in the United States (455 people) — Moscow, according to Deputy foreign Minister Ryabkov, “wants to draw a line under what’s been done in the final weeks of the Obama administration”. Russia does not seek to further aggravation of the situation, although considered all possible scenarios. By the end of the year it will become clear whether the “think again” the White house and the Kremlin, wrote the President trump tweeted in April. Or are they coasting the ongoing crisis will be to increase confrontation.