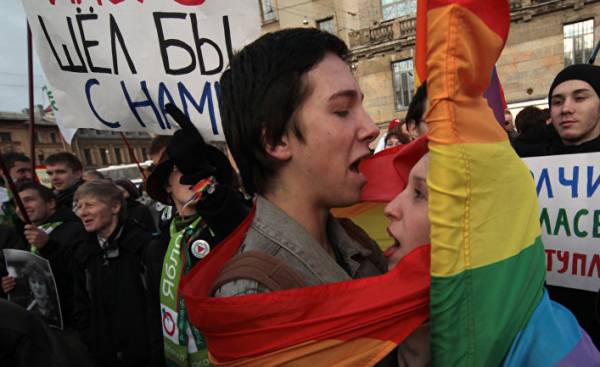 When authoritarian populists inciting hostility to the stars, media, Muslims, homosexuals, former politicians or other people who they do not suit you, it’s often difficult to find the logic that drives them. Maybe it’s because we’re looking for explanations, for example, racism or homophobia, and in fact, all this is done from political-strategic considerations.

Reporting Natalia Antelava “the New scapegoats of Russia” (Russias new scapegoats) for a news site Reveal (24 September 2016) provides an interesting look at what is the cause of hatred towards homosexuals. The main thesis of Antelias is that Vladimir Putin persecutes homosexuals not because he is a staunch homophobe. In his administration there are homosexuals.

And still Russia is a country where more and more delay of the LGBT community, going to demonstrations, where companies identify homosexuals and fire them from work, and where a law against homosexual propaganda, which is held before the Olympic games in 2014.

Anteleva believes that such persecution has strengthened the connection between Putin and the Orthodox Church, and hence with the rural population of the country, as well as extremist groups, which include bursting with testosterone men. They need someone who could chase and beat up legally.

These persecutions also diverted and the Western media, which rushed to write a kilometer-long column about LGBT laws, while Putin under the guise of after the elections in 2011, scored the newborn democracy.

Besides, homophobia and prejudice is a geopolitical advantage in the struggle for the support of neighbouring countries. When Vladimir Putin is trying to save us and to increase its influence, for example, in Georgia, he achieves this including the fact that intimidates Georgian American freedom for homosexuals.

At a conference in Tbilisi, Georgia, in may 2016, in the heads of listeners was driven by the information that Russian President Vladimir Putin defends family values, while Western liberalism is destroying the world, and homosexuality is all in the hands of the Americans, and if the Georgians won’t hold them, then they will be like in San Francisco.

Interestingly, though, all this comes with the gracious support of the American Christian right wing. Despite favorable to Putin’s agenda, the conference was funded by several American speakers from the “world Congress of families”, a lobbying organization that is responsible for the tightening of laws against homosexuals in Africa, as happened in Russia.

Now such rhetoric also settled in the White house. When chief strategist Donald trump Steve Bannon (Steve Bannon) in the summer of 2014 spoke at the conference in the Vatican, he said that mobilizes its troops with the promise to introduce two restrictions on the freedom to ban abortion and to leave the right to marry only heterosexual couples.

It is impossible to imagine a greater contrast with the situation of the 1980-ies, when the American conservatives undermine communism, beckoning residents of Eastern Europe and the Soviet Union, the American freedom seasoned by charm of Hollywood, which starred Ronald Reagan, and popular music from the forbidden list.

Today, modern Christians and the American alternative right wing go to the same countries that, on the contrary, to undermine American freedom, putting it as a Wake-up example.