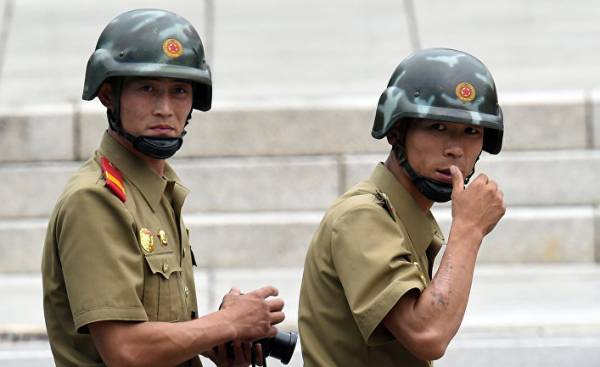 Pyongyang completely rejected the resolution 2371 of the UN Security Council (ban on imports from the country, in particular, iron, iron ore, lead, coal and seafood, as well as a ban on receiving labour force from North Korea — approx. ed.), adopted 5 August, and threatened retaliation.

“We strongly condemn and fully reject adopted by the US and others hostile to our Republic by the resolution as a flagrant violation of the sovereignty of our country,” the KCNA statement by the government.

The official response of the DPRK was promulgated on the day following the adoption of the resolution in the form of government statements that much more serious statements of the Ministry of foreign Affairs.

“The United States will have to pay a thousandfold for the brutal crime against our country and people. And if America will not leave the reckless attempts to crush us, we use the last resort,” warns the government of the DPRK.

“The UN Security Council unanimously adopted a resolution that violate the sovereignty, right to existence and development of our country. From what we have stated before, will be taken decisive steps justice… We will not dwell on ways to strengthen the forces of justice to completely overcome the source of war and aggression. We will continue to follow the path of peace, not lose it,” promised the North Korean government.

The statement also says: “the Fact that we supposedly falter and change his attitude in the face of new sanctions of the enemy — a ridiculous delusion. As long as the United States did not cease his anti-Communist intrigues, and the nuclear threat, whatever anyone says, we do not intend to put on the table of negotiations the issue of reducing our nuclear forces. We will continue to follow the path of strengthening our nuclear potential.”

Also the government of North Korea revealed the unhealthy state of relations with Russia and China, saying that “countries in exchange for “gratitude” to support the USA in plot for the adoption of a resolution against the DPRK, is also to blame for the further aggravation of the situation on the Korean Peninsula. They undermine peace and security in the region, and responsibility that they cannot avoid”.