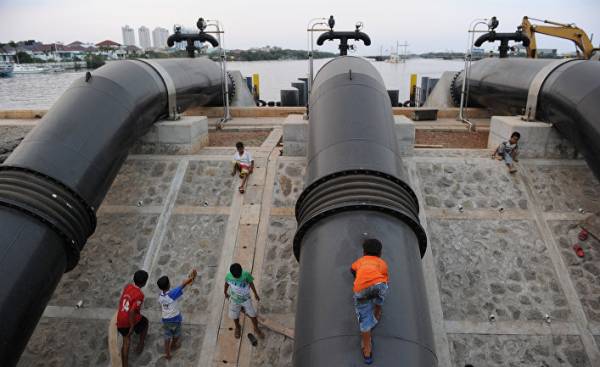 Powerful protective walls of the capital, who plan to build anew, or new roads — the government want in the coming years to invest many hundreds of billions in infrastructure. German firms have huge chances.

Jakarta is struggling to survive. The Indonesian capital every year accumulates more and more, sometimes to 14 cm because of the capital with millions of inhabitants is pumped out too much water at the same time, numerous high-rise buildings growing in the fast-growing city, a lot of pressure on the ground.

The consequences will be dramatic for the ten million inhabitants of the metropolis, located right on the coast. In 50 years the streets of the city will be on 5 meters below sea level, and after a few years, norm has become a large flood because the rivers flowing through the city into the Bay of Jakarta, will have to overcome the force of gravity before flowing into the sea on the last leg when you exit going under the ground of the capital.

At least four million people will have to leave the most dangerous areas, if not stop, slow dive, and is absolutely not noticeable to such an immersion stopped.

With billions of dollars of investment in the metropolis will try to resist this process. The powerful dam must save the great city in Southeast Asia. Before the coast of the capital should appear construction long of 32 kilometers. The so-called “Giant Sea Wall” (giant sea wave) is part of an ambitious plan of rebuilding the entire coastal area of the city.

In the body of the dam plan provides a large drinking water reservoir that will be filled with the water of the rivers flowing into the sea, and artificial Islands with the ability to move 700 thousand people. The gigantic project should cost a total of $ 50 billion.

Hardly any other capital in the world is in danger to the same extent as the Indonesian capital. However, if we are talking about expensive projects, the Indonesian government is unlikely to be an exception. On the globe in the coming years will be implemented powerful infrastructure projects to make people’s lives safer, cleaner and more comfortable.

In this case we are talking about huge amounts. The consulting company McKinsey believes that in subsequent years the investment in infrastructure construction will be approximately 2.5 thousand billion dollars.

The organization for economic cooperation and development (OECD), a forum mostly developed industrial countries, even thinks that the world of 2030 will spend each year, approximately 6.3 a thousand billion dollars on new infrastructure. German companies will be eligible to participate in many projects.

Need looks huge. In rich industrialized countries such as the UK or France, deteriorating bridges, sewer systems and airports built in the last century or even earlier. They need to be upgraded, expanded or built completely anew. Only in the USA, according to not quite disinterested to the estimates of the U. S. Engineering Company, in the next eight years on the infrastructure necessary to allocate 4.5 billion dollars.

Hardly there is something more sensational than a Great silk way

One implementation of two major U.S. projects should cost about $ 100 billion. California has already begun the construction of high-speed railway between San Francisco and Anaheim, South of Los Angeles. The first phase of the highway with a length of 520 kilometres, passing through the most densely populated state of America, should be worth about 62 billion dollars.

And on the Eastern coast of the country, a new rail tunnel under the Hudson river at a cost of approximately $ 20 billion needs to connect new York with new Jersey.

However, some infrastructure projects of the coming years can be compared with the project of a new Great silk road Chinese leadership, which wants to use the highways, railroads and sea transport to link the industrial heart of China on the East coast with its hinterland, Central Asia and Europe.

This prophetic project has already begun, in the country they are already partially implemented. Will this giant construction project is completed and how it will be done is not clear, especially in regard to infrastructure outside of China.

A large part of the billions of dollars of costs could, however, go on regular construction projects (which, however, become expensive), for example, planned the fiber-optic network, which in the next three years to appear in France and cost about 20 billion euros. Such a network will be available for a large part of the population.

In the coming years in the fight against climate change and the global search for new energy sources big money will be invested in new energy, networks and batteries. For German companies open lucrative business opportunities.

German company to provide services in foreign economic projects Germany Trade and Invest (GTAI) expects that the German business may receive income from many of these large projects. This is particularly true for complex special tasks.

In pure construction work, which is often not particularly technologically sophisticated, German firms are unlikely to participate because the German providers are much more expensive on the international market. Besides, there are no more construction concerns with the necessary global amount. So says Martin Kolhapur (Martin Kalhöfer), head of middle East and Africa in the company of GTAI.

“In Germany there is a very large construction companies, so German companies can hardly get the chance to participate alone in the building. However, these projects offer major opportunities to German companies, especially those that are suppliers of high technology,” says Kalhamer.

Of particular interest to medium businesses of Germany are large projects in those areas where Germany has a strong position. This, for example, the equipment for sewage treatment plants, geothermal and other renewable energies or recycling. In one analysis, which reviewed Welt, GTAI has made an assessment of the planned projects in 15 countries. German companies can participate in these projects.

300 million Indians without electricity. There is the possibility

Studied economy is chosen in such a way to show the total range of construction activities in the world from Spain to Nigeria. In line with this, emerging economies and developing countries in the near future will be to invest in infrastructure much more than industrialized countries, because they still have to create basic infrastructure for its population.

Streets, sewage systems, hospitals — it’s not built for the greater part of humanity. And in the big cities of the southern hemisphere it is the basic precondition of life worthy of man. 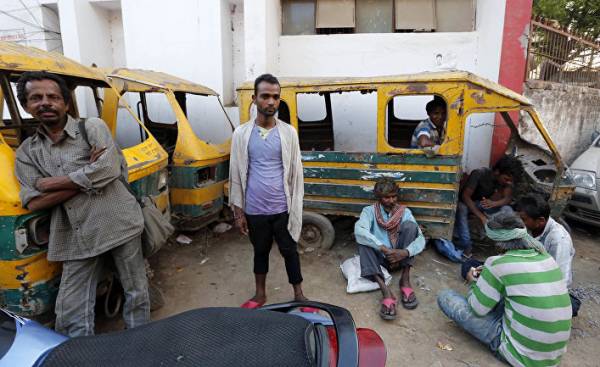 © AP Photo Rajesh Kumar One residents in search of work in Allahabad, India

For example, in India without electricity still live 300 million people is approximately the population of the United States. Therefore, in the future, the state energy company will invest $ 6.6 billion in the new network, gensets and renewable energy.

Iran and Egypt are also investing billions in its power grid. “Presumably such a vast and complex country like Egypt, also need German know-how, says Martin Kolhapur. For the German Builder of large industrial projects Egypt, incidentally, is the most important market of the region.”

Construction companies over the years, it gathered orders for $ 3.7 billion, primarily because the Egyptian government has built several large power plants. For Siemens an order for the construction of three power plants was the largest in the history of business.

German construction equipment for the new capital of Egypt

Since there are still many political and economic problems, another gigantic project of the Egyptian government seems grotesque. The government wants to build a new capital in the desert between Cairo and Suez. This capital needs to be developed over seven years, and then to give shelter to seven million politicians, bureaucrats and diplomats.

To build a city to be military. This project will be of interest to German companies, if we will focus on areas such as modern construction machinery, equipment for security services or, for example, lifts or elevators, says the GTAI expert.

In some places governments have already undertaken such prestigious projects. The Gulf States in the era of high oil prices and a bubbling fountain export revenues built in the desert Sands many powerful public buildings. “The Gulf countries over the past years invested a lot in infrastructure, often financed projects that had oversized or attracted much attention,” — said the expert Kolhapur.

In these countries now takes a turn from pilot projects to strategic, such as objects for Expo 2020 in Dubai. “In addition, governments are investing in social infrastructure, e.g., schools, education and hospitals, to meet the needs of the population.”