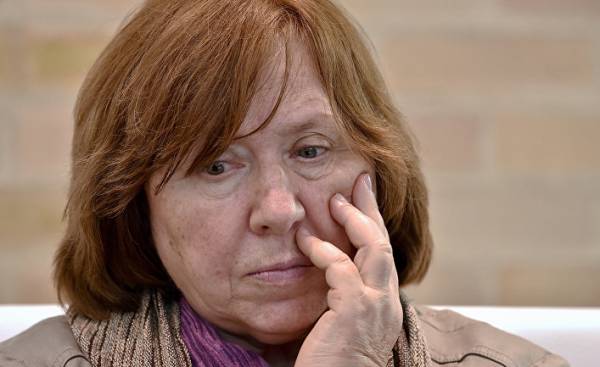 Nobel laureate for literature Svetlana Aleksievich in an interview with “Nasha Niva” was thinking about why in Kurapaty still don’t see what state the monument, and also compare Russia and Belarus.

“Nasha Niva”: Svetlana, in April you were asked to head the Commission on the memorialization of Kurapaty (forest tract in the North-Eastern border of Minsk, where mass graves were discovered shot in the late 1930s and early 1940-ies, approx. ed.). Maybe it’s not the best time, you refused. However, the case is not progressing, need a person who would be driving it. Do not change your plans?

Svetlana Aleksievich: I Have no influence on the current government, so obviously I was powerless. If someone could budge, only Pavel Yakubovich [editor in chief of the newspaper “Sovetskaya Belorussia”, a confidant of Alexander Lukashenko].

Contact with no power, and would have to go to the top. To be able to contact people, experts, this freedom I have. But to be a puppet in the hands of power I just don’t. I thought about it all, but I’m helpless as any free man in such a situation.

It’s a nationwide thing, but it has no Foundation. Because first it is necessary to condemn Stalin’s repressions, to reflect on them. We, of course, a little said about it, because nowhere to retreat, the people life put to Kurapaty became Kuropatki. And this Foundation is no freedom in society there. Stalin talks about all… on the Contrary, now is the time of Stalin. Thank God that only in Russia. But I think in the minds of some of our people is also there.

Am I naive to believe that alone something can be done to be don Quixote. Even with a group of enthusiasts hard! No one today listens to or hears of a free people. It’s not the me I wanted or not wanted. The fact that people like me, power is not needed.

— How you consider, why has this initiative stalled?

— It was a personal initiative of Yakubovich. You know, he’s a very complicated person. There are a lot of Yakubovich — dark, light… Then he somehow thought that he can solve, but even he failed. Several years ago, Lukashenko has expressed his desire to visit Kurapaty, but still didn’t.

Yes. Where should begin such activities?

— The President should visit Kurapaty. To kneel, as once did the German President Richard von weizsäcker, to utter words of repentance before his people, before the world. What does the monument without movement and new ideas, thoughts, reflections on the past? What do you mean the monument? Something formal. It can be used by an authoritarian government for their own purposes. I don’t see how this monument could come people. While this is just a thought of enthusiasts. The people and the government is OK with that, power even irritated.

— Do you believe that the government can go to the condemnation of Stalinist repression?

— I think not. We are very closely connected with Russia, and although we have many things that scare us in Russia, we have enough of his own. We have, fortunately, not put a monument to Stalin, Ivan the terrible, Muravyov the hangman. And thank God that no Orthodox are not “Belarusfilm” did not protest against a movie about the king. Such things do not occur. But it’s a close conjunction. I wonder how will further develop relations with Russia, because Belarus is a very important country for Russia. We still don’t know what awaits us, what fate.

But in a separate purification process, democracy is not very believable. Such a nightmare, as in Russia, we have, of course not. The proximity to Poland and Lithuania creates a different climate in the country. We’re not joined this anti-Ukrainian anger. I was recently in a queue to the doctor. Started talking about Ukraine. And I noticed that Russia was the only Russian, Belarusian or silence or a negative attitude. To make this happen, must be a very strong leader, focused on democratisation, the renewal of society. It must be either the young leader or the person is not tired of government.

— Still would like to see some kind of monument from the state occurred in Kurapaty.

— I only. But I think it will be a very long time.