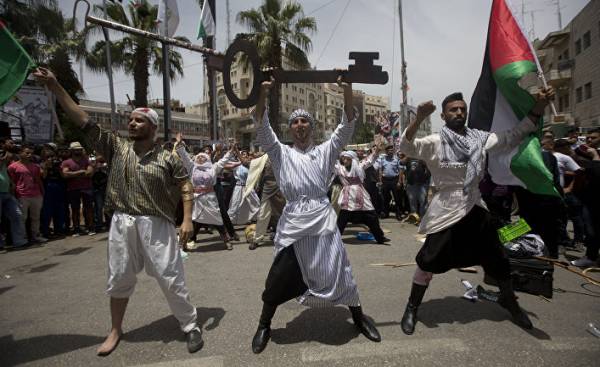 This Church is apparently the only place in the tower of Babel Situated that remembers the longest invasion in the world, and continuing today, 50-year occupation of Palestinian land, which is increasingly reminiscent of the Russian annexation of the Crimea, writes the diplomat and a social Democrat Pierre Schori.

Original position, to put it mildly, bleak. In 2017 year marks 50 years since then, as Palestinians live in conditions reminiscent of apartheid, and in 2018 will remind you of the Nakba (the Exodus of Palestinians in 1948 — approx. TRANS.), “the great catastrophe” of 70 years ago when more than 700 thousand Palestinians were expelled as a result of the UN plan for partition of Palestine and the founding of the state of Israel.

The bare facts underline the seriousness of the situation and explain why the universal of anger and despair occupied.

More than 5 million descendants of the expelled in the Nakba day are still forced to live away from home.

Since 1967, Israel has established 127 illegal settlements and 100 outposts in the West Bank of the Jordan river, protect them permanently placed there, 98 and 59 temporary military checkpoints and 60-km road, open only to Israeli vehicles.

In the settlements located some 600 thousand citizens of Israel, 205 thousand live in East Jerusalem, and 380 thousand in the West Bank. And the 1.7 million Gazans trapped in the “biggest prison in the world”.

This seemingly unstoppable growth of new settlements during the most extreme government in Israel’s history, encouraged the most extreme US administration, raised at our seminar serious questions.

Where today are the borders of Israel? What we recognize Israel? Is it true that Israel is “the only democracy in the region”?

What methods should be applied to the rest of the world to achieve justice and ensure the safety of both Israelis and Palestinians and prevent a new war?

What is the role of the private boycotts and official sanctions applied similarly to the case of South Africa?

Anna Karin Hammar called to help the international movement of “Boycott, exclusion, sanctions” (BDS), which calls to boycott Israel, to cut investment in this country and subject it to sanctions until you stop the occupation and violations of international law.

Annika Seder emphasized that BDS is a grassroots movement which can not governments of countries. But she noted how important it is to adhere strictly to the EU rules for products produced in the occupied territories.

According to these rules the areas occupied by Israel in 1967 — the West Bank, Gaza, Golan heights and East Jerusalem are not part of the state of Israel. Accordingly, the supply of there products should not be marked with the sign “made in Israel”. Annika Seder stressed that Sweden has recognized Palestine, which makes possible open dialogue and effective assistance and cooperation. Israel, however, complicates the provision of assistance to Gaza.

Gideon levy was feeling quite pessimistic. Netanyahu and others like him — against the creation of two States. Daily violations of international laws and Palestinian rights. Of course, it is important to assist such civil organizations like Breaking the Silence, BTselem and Al-Haq, but believe that the necessary changes will come from Israel means to indulge in illusions. Pressure from outside is needed, that’s why sanctions are important.

Levi doubted that Israel is a democracy. For Israeli Jews — Yes, he enjoys freedom of action, despite his scathing criticism. But Israeli Palestinians are second-class citizens, and have occupied there are no democratic rights.

Abu Nidal Left told about the daily limits that have passed the way from “hope to despair”. He went to prison, he lost his license and phone for organizing book fairs at the University.

All his life he spent under the control of Israel, the settlers have manipulated his right to freedom of movement and other civil rights and access to water and electricity. He called on the EU and Sweden to go further than it is now. Crimes against international law should cease, only some statements are not enough. “We pay for the occupation. You have to pay for your declared independence.”

Among the audience were the ambassadors of Palestine and Israel. When our time came to an end, the Israeli official began to shout that the debate is one-sided. I noted that we had neither the time nor the desire to organize a meeting of the parties to the conflict, and therefore the Ambassador of Palestine also have not received word.

The purpose of the meeting was with invited interlocutors to determine how the ongoing occupation can affect what is happening, could Sweden to do something in this difficult and devastating situation, and if so, what.

Pierre Schori — diplomat, politician (social Democrat), former Minister of international cooperation and representative of Sweden to the headquarters of the United Nations in new York.