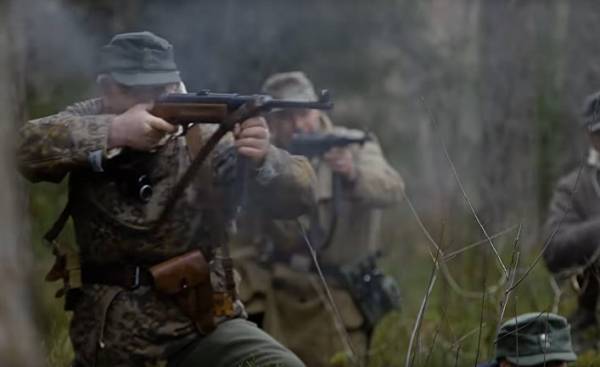 “Who were the “forest brothers”?” was the title of a recent report of the Latvian radio. It was about an obscure episode of the new history of this country: on the activities of the Latvian, Lithuanian and Estonian partisans who were hiding after the war in the forests and fought against the Soviet Union. For many years, the theme of the “forest brothers” did not cause any international outcry, although between Russian historians and their Baltic counterparts on this issue has happened many fierce disputes.

The situation changed after the NATO on your YouTube channel recently posted an eight-minute video called “Forest brothers — the struggle for the Baltic States”. The Baltic States, where over the past few months, NATO deployed an international military force as part of the expansion of its presence (Enhanced Forward Presence), welcomed the fact that knowledge about the resistance movement came to wider international community. Russian media and official bodies and representatives of the authorities, in contrast, reacted harshly: in their words, is “a blatant glorification of Baltic Nazi collaborators”. While Russia advances sweeping accusations in support of the Nazis to those who have their own view of history.

However, like many other issues in Eastern Europe, the history of the Baltic partisans fought against the Soviet Union, too complex to fit her with simple labels. The Baltic States in 1918 and achieved independence from Russia in 1940 fell victim to the Pact between Hitler and Stalin, according to which it was annexed (according to Moscow, they joined the USSR voluntarily). During the Soviet repression and deportation of the people was followed by three years of German occupation. Back in 1944 the Red army — but not in order to give the Baltic States independence, and to force them to return to the Soviet Union.

Against this background it is not surprising that the “forest brothers” was quite a motley community: among them met and idealists, and looters, and, equally important, the soldiers who participated in the war on opposite sides. But even those who fought against the Germans on the side of the red army, but were known as supporters of independence, could not be expected from Stalin’s dictatorship, nothing but deportation to Siberia.

The nature of any guerrilla movement is, the compromise is not for them. “Forest brothers” also acted on the principle “whoever is not with us is against us”. Although they enjoyed widespread support of the local population, without which they simply would not have survived, among them were those who disagreed with their methods; either because really expected from the Soviet Union of something good, or because I didn’t see any other way but to try to negotiate with the new government. But if the “forest brothers” of someone suspected of collaboration or treason, they acted against them as uncompromising as against Soviet invaders.

“Forest brothers” were active throughout the Baltic States for several years after the end of world war II. Powerful all this movement was in Lithuania, where at times the guerrillas controlled entire neighborhoods. After Stalin’s death in 1953, an Amnesty was declared that allowed them to return to civilian life.

While Soviet and Russian historians consider the “forest brothers” terrorists, the identity of the Baltic countries — they are the heroes of the struggle for independence. Not least because of their hopeless struggle against the domination of the totalitarian Soviet state emphasized the fact of occupation of Baltic States by a foreign power. This is important not only for the interpretation of history the inhabitants of these countries, but also to maintain the legal argument of the thesis that they themselves never renounced independence, and they took her with violence.

About those difficult circumstances in a short film NATO said very little. Instead, the guerrillas are presented as unambiguous heroes. However, thereby the Alliance, paradoxically, has done a disservice to the Baltic States, which aspire to the “forest brothers” had more information. Because too simple a description of them provokes the same demonstrative response.

And it is to this reaction, Moscow is always ready. However, generalized equating of the “forest brothers” Nazi collaborators by the Lithuanian authorities, for example, said that the Soviet Union cooperated with Nazi Germany for the outbreak of the Second world war.

This was emphasized by a British expert on Eastern Europe Edward Lucas (Edward Lucas) in his blog post about the contradictions of NATO. Guerrilla war in the Baltic States is not two-dimensional Soviet myth, as Estonians, Latvians and Lithuanians were not in a situation where they could freely decide which side of Nazi Germany or the Soviet Union — they fight, wrote Lucas. According to him, they were forced to what they are faced with a dilemma. In this difficult situation, the people behaved the way, I noticed Lucas: some acted with honor and dignity, other mean in the same way as I would other peoples.

In the Baltic countries, said Lucas, the Red army in 1944 perceived for the most part not as an army-liberator. That is the ugly truth for today’s Russians, which was explaining the myth of war. But that, according to Lucas, is the most noteworthy point in the current dispute is the fact that the Kremlin apparently saw himself as the successor of the then enemy of the “forest brothers”, namely the notorious secret service of the NKVD. This, in his opinion, it is necessary to discern the actual scandal.