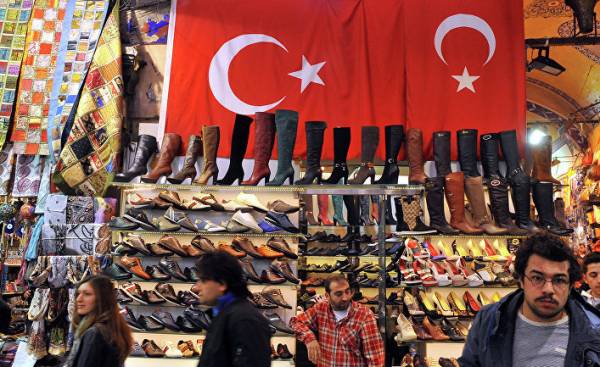 In Laleli, which three years ago took the Shuttle trade in the amount of six billion dollars, the turnover fell by half. Now tourists make purchases frequently but in small volumes.

In Laleli (a shopping district in Istanbul, is designed primarily for wholesale buyers — approx. TRANS.), where the turnover of tourist shopping, also known as “Shuttle trade” amounted to six billion dollars, sales decreased under the influence of the ongoing economic crisis in Russia. The head of the Association of Industrialists and businessmen of Laleli, Giyasettin Eupora (Gıyasettin Eyyüpkoca), who drew attention to the fact that political tensions between the two countries has been overcome, but Russia remains the economic crisis, noted that the providers normal trading cycle, but the budgets have decreased. Last year in Istanbul in the presence of four thousand outlets and three thousand places for placing of visitors, the volume of trade amounted to 2.5 billion dollars, said Eupedia. And if in 2012 in the framework of the Festival of fashion and shopping district of Laleli has signed deals amounting to $ 12 million, but this year the festival will be held with the expectation of five million dollars.

Trade fell by half

The festival, which this year will be held from 7 to 13 August, it is planned to make 250 participants from eight countries, said Eupedia. The current situation Eupedia describes as: “the most Important customers Laleli — our guests from Russia. For reasons such as economic problems in Russia, airplane crisis, in 2015 and 2016 the number of tourists from this country fell significantly. The drop in the number of visitors from Russia, which is one of the most important trade partners of Turkey, at the same time, a very negative impact on our trade. The volume of purchases by our customers and declined at 60%. Export Laleli, which in 2014 was close to six billion dollars, fell to $ 2.5 billion. Trade has decreased, but the source is not us, and the economic crisis in Russia.”

Eupora, drawing attention to the fact that 2017, the year began well, and trade had increased 25-30%, told about the goal to complete the current year with growth of 30%. Eupora noted that the festival, which this year will be held under the slogan “Istanbul gold key trade,” effect of doping on the market. “Thanks to the synergy that will create the festival, we’ll be back in the old glorious days. This year decisions were taken in eight countries. They will make a significant contribution and in the trade of Laleli, and in the economy. We visited these markets with the appropriate Commission. Our only criteria when we invite the delegations for procurement, they can visit those retailers who have at least ten shops in total. In the festival in Istanbul will be attended by 250 buyers from Russia, Iran, Poland, Romania, Serbia, Nigeria, Lebanon, Cameroon.”