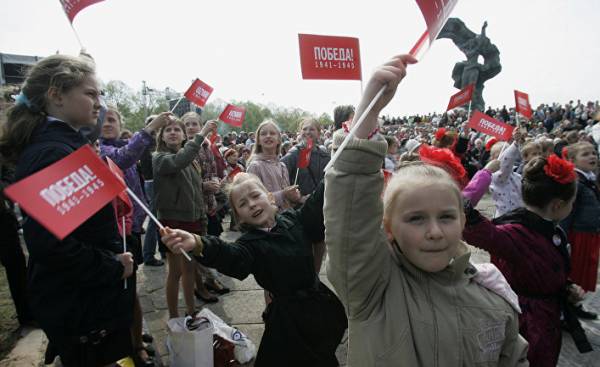 This summer we will celebrate 26-year anniversary of the final break ties with the Soviet occupation regime, however, the presence of informational and cultural space of Russia in Latvia is still strongly felt in all spheres of life. Perhaps living in Latvia, it is not so evident, but after a long stay abroad, it is impossible not to notice. This situation is suggestive of why a quarter-century after the liberation from the shackles of a part of the society prefers so hard to hold on to them.

Released this summer, a study on media preferences of inhabitants of Latvia the figures confirms the subjective feeling of a significant presence of informational and cultural space of Russia in our society. During performed Latvijas fakti analysis revealed that Russian TV — First Baltic channel, “NTV-Mir Baltic”, “RTR-Russia” — see 63% of the surveyed residents of Latvia. The study revealed a pattern: most of the viewers of Russian TV-channels among foreigners (these channels are looking to 82% of foreigners), but more than half (52%) of Latvians regularly or sometimes watch created in Russia television programs.

However, representatives of the age group up to 34 years of age consume relatively little produced in Russia the content of TV channels. Perhaps because these people generally watch a little TV. It is noteworthy that inhabitants of Latvia on the Russian TV channels and entertainment content attracts more than news programs (their looks 28%). Movies and TV shows look 45% of Latvians, Comedy programs, concerts and musical shows — 33%.

Simultaneously this study reveals quite an interesting picture of our perception of the influence of the media on people’s minds. 83% of respondents agreed with the statement that media and their content affect the views of society, but only 47% of respondents agreed that provided the media influences their personal views. Almost half of study participants (45%) rejected the statement about the impact of media content on their personal opinion on various issues, values and attitudes to the events. In other words: do not see the beam in your own eye, but can see the speck in another’s.

Media intake is only one litmus test that shows the nature of our society. There are more concerts of Russian artists, touring theatre and other spheres of life, which supports strong ties with Russia on our own. At the same time, it is no secret that people in Latvia are quite well aware of the threat that our free state creates in various fields is the largest country in the world Russia.

Thinking about these kind of relations with Russia is a threat to our living space, on the one hand, and voluntary immersion in the arms of the Russian cultural space, on the other, I see a situation that could be called a typically post-colonial. Well you know that’s not easy to talk about himself and his society as still can not cope with a great historical trauma. But are we the exception and protected from what is not protected others? And who, except us, will cleanse our eyes from the logs?

While living abroad, and through international media often have to meet people from countries which for several decades until the restoration of independence of Latvia was freed from the colonial yoke, for example, France or the UK. In their thoughts and attitudes definitely felt hostility towards the former colonial power, but at the same time, there is a kind of inexplicable pride for belonging to a linguistic and cultural space of the former colonizer. For example, in some countries of North Africa French is still the first foreign language, although English gives more advantages in our global world. I have met people from India, who not only speak good English, but eager to Britain for education, in search of jobs.

The desire of some people to draw knowledge and experience from former colonizers countries contradictory, but well understood, because of the development of the national economy and opportunity freedoms are better. Many former colonies are far enough from the former colonial powers, and are endangered in terms of population or great power ambitions.

So with Latvia, it is located near Russia, which has never accepted the loss of the Imperial power. And by population the situation is that if the Latvians themselves do not care about saving his Latvian and European cultural space, it is complete immersion in another space it may be only a matter of time. Besides, we absolutely have nothing to learn from Russia in terms of quality of life, economic development opportunities in the sphere of human freedoms. Just the opposite — developments in the neighboring country every day should serve as a reminder of what we survived and where we never have to go back.