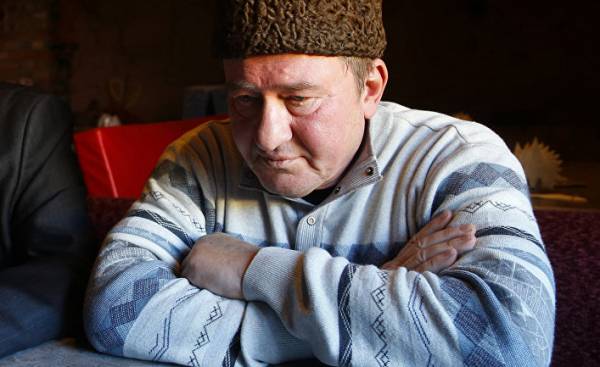 In the rose garden outside the harem and flavors the water flowing from countless fountains create a feeling of “1001 nights”.

The Khan’s Palace (in Tatar — “garden Palace”) for several centuries was the center of the state of the Crimean Tatars on the Peninsula, and their historical capital, Bakhchisarai, surrounded by a dry plain, still evokes nostalgic and romantic feelings.

But behind the walls of the Palace, the reality is much less aromatic.

Because approximately 250-300 thousands of Tatars living in the Crimea, which was annexed by Russia in March 2014, to exist under the new government difficult.

The Tatars were the population group that is most actively opposed the occupation — in particular, spending crowded demonstrations in the main city of Crimea, Simferopol.

And they paid dearly. The most powerful political organization of ethnic minorities in the Majlis (organization recognized as extremist and banned in Russia — approx.ed.) banned her media closed and Tatar activists have been harassed by the authorities.

A large number of opposition-minded Ukrainians and Tatars were finally forced to leave their land. Basically, they went to the Ukraine.

“After the Russian occupation tens of thousands have left Crimea, the numbers are different, from 40 to 60 thousand”, — says Freedom House, a non-governmental organization working on issues of democracy, rights and freedoms, the report on the analysis of the situation.

One of those who decided to stay on the Peninsula and to fight for the rights of the minority, was 60-year-old Ilmi umer, the former mayor of Bakhchisarai and a prominent member of the now banned Tatar organization, the Mejlis.

He became a Central figure in the political resistance to the occupation authorities in may 2016 and this has led to serious consequences. Authorities have accused Umerov on charges of incitement to separatism, with the result that he could be sentenced to five years in prison.

The case against well-known and popular person attracted on the Peninsula a lot of attention.

“On the day when charged and our house ransacked, several hundred people gathered around our house, at each meeting have a lot of people,” says his daughter Aisha Umerov in an interview with Jyllands-Posten.

She has no illusions about the outcome of the trial against Ilmi Umerov, which of the security service, the FSB, even at some time was placed in the psychiatric ward of the hospital.

“From the very beginning said that this is a political order, so to speak, of fair trial is meaningless,” says Aisha Umerov.

“Repression in the Crimea are explained by the desire to suppress any dissident, any opinion different from the one that enforces the Russian propaganda,” she said.

Sitting in the dock, and many other Tatars, while others received lengthy prison sentences in the trial, which was criticized by local and international human rights organizations.

Tough policy of the Russian authorities has forced some observers to draw Parallels with the oppression of Muslim Tatars in the Soviet period.

Russia conquered Crimea in the end of XVIII century under Catherine the great, gradually Tatars numerical pushed the Russian immigrants that became the largest population group on the Peninsula.

Soviet forced collectivization, the suppression of political dissent and anti-religious campaign resulted in more acute contradictions, which culminated in the deportation of the Tatar people from Crimea in may 1944 on Stalin’s orders because of an alleged collaboration of the Crimean Tatars with the German occupation authorities.

About 200 thousand people were exiled to Soviet Central Asia. Transportation conditions were terrible. Tens of thousands of Tatars died on the way, and the survivors were able to return to the Peninsula only in the second half of the 1980s, heads.