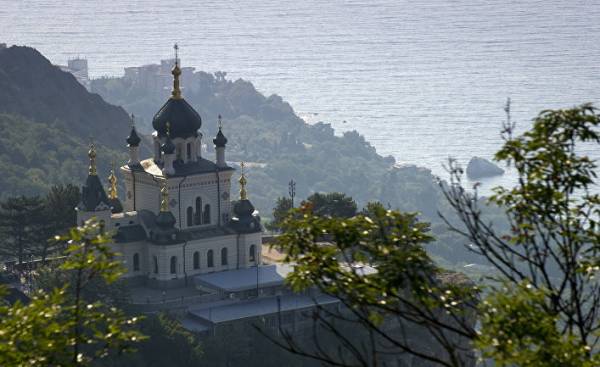 Western politicians have condemned what they call the Russian occupation of Crimea contrary to international law and imposed sanctions against Russia. However, those who visited the Crimea, I can tell you that the vast majority of the Peninsula’s population supported reunification with Russia in 2014. It is likely that Russia, taking Crimea under its control, prevented a bloody armed conflict.

In the fall of 2015, for research purposes, I visited the Crimea, where I interviewed historian and Director of the State Museum of Taurida Andrey Malgin. In addition, I spoke with the leader of Communist party in Crimea, a local journalist, Tartar-fighting for human rights and members of the Literary Academy of the Crimea, at the invitation which I came to the Peninsula. The people who interviewed me, had different opinions on many issues, but one thing they were unanimous: it’s good that Crimea became Russian again.

Andrei Malgin gives the impression of a man’s thinking and prone to Analytics. He stressed in an interview that, if the Russian authorities did not take Crimea under its control, to the Peninsula would come Ukrainian nationalists and provoke a civil war — same as in Eastern Ukraine, and then Russia would have to intervene in much worse conditions. He was also glad that the Crimea became part of the Russian Federation. For the population it’s much better than if the Peninsula became a region of uncertain legal status, such as Abkhazia.

The journalist said that West Ukrainian extremists crossed the line, overthrowing by force the legitimately elected President of Ukraine, Viktor Yanukovych, and after that, it was unthinkable to Crimea continued to be associated with Ukraine.

The fact that almost everyone in Crimea supported reunification with Russia, confirmed by the results of the recognized polls. In a survey conducted by the American Pew Research Center in may 2014, 91% of people said that a referendum on secession from Ukraine in March of that year were free and fair. 88% of respondents said that the government in Kiev should respect the results of the popular vote. These figures coincide with the official results of the referendum on secession from Ukraine, when 96.7% of the (in Sevastopol 95,6%) voted to secede, and the turnout was 83.1%.

The Crimea was always inhabited by various ethnic groups, including Tatars, which in the XV century was founded on the Peninsula of their khanate, but a part of Ukraine it never was. At the end of the eighteenth century the Crimea and the territory North of the Black sea was conquered by Catherine the great and incorporated into the Russian Empire. In order to colonize their newfound province — the new Russia — the Empress urged not only the Russians and the little Russians (Ukrainians), Serbs, Greeks, Germans and others non-Russians who moved here, was soon Russified, and the region became part of the Russian cultural space.

In 1954, when it was celebrated the three hundredth anniversary of the reunification of Ukraine with Russia in 1654, Nikita Khrushchev transferred the Crimea, then part of the Russian Federal Republic, the Ukrainian Soviet Republic. This gesture, however, had no value to the population of the Peninsula, who considered himself 100% Russian.

Boris Yeltsin could, no doubt, be forced to return Crimea to Russia, when the Soviet Union collapsed in 1991. But the only thing he cared about was the desire to humiliate Gorbachev, accelerating the demise of the Soviet Union. In the 1990s in the Crimea were strong separatist sentiments, which, in particular, is manifested in the fact that in 1994, the Peninsula was elected own President. But Yeltsin’s Russia, divided and weakened, did nothing to come to the rescue of the inhabitants of the Crimea.

The fact that the population of the Crimea broke from Ukraine in the referendum of 2014, was the implementation of the principle of the right of Nations to self-determination enshrined in the UN Charter. You can spend hundred percent parallel between this plebiscite and tear of Norway with Sweden in 1905 and tear of the populations of various colonies from their European metropolises in the first decades after the Second world war.

Western countries themselves have created a precedent for the release of the Crimea from the Ukraine, recognizing Kosovo as an independent state. The difference between Kosovo and Crimea is that an exit of Kosovo from structure of Serbia occurred during the bombing that cost the lives of thousands of people and led to the expulsion of hundreds of thousands of Serbs, and Crimea broke from the Ukraine completely bloodless, and the gap does not entail any ethnic cleansing.

And what about the Crimean Tatars, the descendants of those who ruled in the Crimea until the Russian conquest in the eighteenth century, and that Stalin in 1944, accused of collaborating with the Germans and deported to Central Asia? In what position were they?

According to the activist of the Tatar human rights movement Vasvi Abduraimov has been, with whom I talked, most of the Tatars reacted positively to the reunification of the Crimea with Russia. He stressed that the Tatars and other ethnic groups subjected to persecution, since the end of 1980-ies began to return their rights, but these processes were interrupted by the collapse of the Soviet Union and the fact that in 1991, Crimea went to independent Ukraine. After 1991, the Ukrainian authorities did nothing to improve the situation of the Tatars. On the contrary, they managed to provoke conflicts between Slavs and Tatars in Crimea. In addition, Abduraimov considers that hardly anyone trusts of Tatars Tatar leaders in exile who received asylum in Ukraine, after they initiated the economic blockade of the Crimea.

After the Crimea became part of Russia, Tatars look to the future with optimism, assured Abduraimov. The reason is that Russia, unlike Ukraine is a multinational state, and that the Russian government is forced to treat the Tatars and other non-Slavs good to be able to realize their aspirations of integration in the former Soviet republics in Central Asia.

During your stay in Crimea, I visited many parts of the Peninsula, in particular, those where there are many Tatars. I never noticed ethnic tensions. Everyone with whom I spoke, said that among the various ethnic groups in the Crimea there are practically no conflicts.

Politicians and cultural figures from many European countries visited Crimea since 2014 and has made its own independent opinion on reunification with Russia.

Norwegian politicians and ordinary citizens should do the same. They should visit the Crimea, to travel around the Peninsula and talk to ordinary people. I am convinced that they, like the author of these lines, you will find that nearly all in Crimea, including Crimean Tatars, support the reunification with Russia, and that people look to the future with optimism.