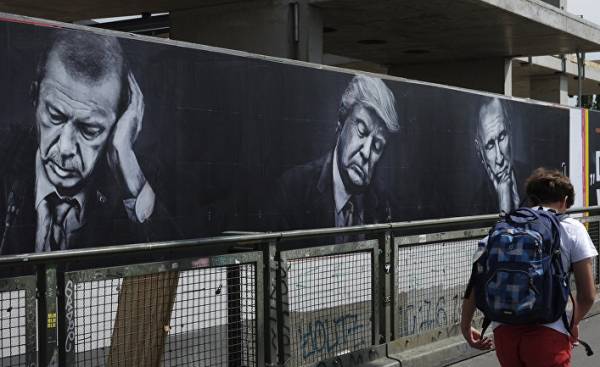 Relations between Russia and the USA worsen. In response to the sanctions trump Putin has demanded to reduce the number of American diplomats in Russia. After a while, this tension will inevitably affect other regions and issues. Although the list is quite long, first to come to mind the Ukrainian crisis, the civil war in Syria, the Iranian nuclear issue, the civil war in Afghanistan.

The Ukrainian question in Russia, apparently, will not yield and will put pressure on the US and its European friends. With regard to the Iranian nuclear problem, Russia is likely to take steps aimed at weakening the influence of the United States. In Afghanistan, given the assumption that Russia supplies weapons to Taliban (banned in Russia as a terrorist organization — approx. ed.), it may need different methods to increase even more its importance in the region. And on this front tensions as Syria, although “the mechanisms of preventing the occurrence of undesirable conflicts” prevent direct clashes between soldiers of the two countries, they mean that “the work being done by other hands” will continue on all fronts. This applies primarily to relations with the Kurdistan workers ‘ party (PKK)/ Party Democratic Union (PYD), East of the Euphrates, Idlib, Turkey’s role.

The tension in relations between the two countries is not limited only to these regions, and themes. It will also affect political, diplomatic and security environment, other countries and non-state players. Including Turkey.

Russian-American tensions and at the same time takisawa Turkish-American relations profoundly affect the political, economic, diplomatic and security environment of Turkey. And somehow persuade the country to new preferences and steps. Relations with the United States, the purchase of air defense systems s-400 from Russia, the Syrian issue, the use of sanctions against Iran, the problem of the PKK, relations with the EU and NATO are some of the factors.

Turkey because of the speed of events and the frequency of statements does not have the ability to calmly oversee things. While the CIA, one of America’s intelligence organizations, stops the operation of arming and training the Syrian opposition, the US army broadens and deepens their relationship with the PKK/PYD. On the other hand, in Idlib, the growing influence of groups in the list of terrorist organizations. Judging by the statements, the region is “safe for terrorists,” and this requires the early conduct of military operations. This means that it’s time to see how the competition of the US and Russia will affect Idlib, who, with whom and how to carry out the intervention.

However, the US do not even feel the need to hide their relationship with the PKK. They continue to cooperate with the PKK, letting the reaction of Turkey on deaf ears. At first the generals and later the special representative of the United States in the coalition against LIH (banned in Russia as a terrorist organization — approx. ed.) Brett Mcguirk (Brett McGurk), I see nothing wrong with expressing your contentment of the PKK. Mcguirk goes further and accuses Turkey of supporting the terrorist organizations linked to “al-Qaeda” (banned in Russia as a terrorist organization — approx. ed.). Among his convictions proposals easily find a place “hints for trucks with ammunition, belonging to the National intelligence organization (MIT)”. And the PKK are so satisfied with US that may even threaten to stop the operation in raqqa, if Turkey will not back down. Looking at the overall picture, we can say that the coming months promise to be hot on all fronts and to a large extent under the influence of tension in Russian-American relations.