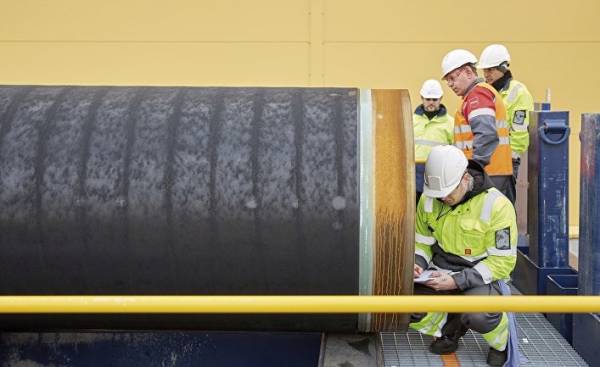 Rather, it is about what the President actually wanted to stop, but not the overwhelming majority in both houses of Congress voted to expand economic sanctions against Russia. They are tightening including in connection with the Russian occupation and annexation of Crimea and ongoing military aggression of Russia in Eastern Ukraine.

Advanced American trade sanctions hurt the country’s planned new gas pipeline between Russia and Germany in the Baltic sea “Nord stream — 2”. It is regarded as a risk by starting to export American gas to Europe, but first and foremost — as energostrategia Russian threat to Ukraine. This former Soviet Republic not only needs Russian gas, but also depends on the revenue that Russia gets from sales of gas to the EU. When the “Nord stream — 2” will be completed, he, along with the already existing “Northern stream — 1” will make the pipelines running through Ukraine, unnecessary, and Russia will become easier to use gas guns as a method of pressure.

But the European Commission reacted negatively to these American plans of direct sanctions in the pipeline. With special suspicious of the Americans due to the fact that they take up the sanctions weapon to help its own gas exports. The Commission also accused the US that they are not energy policy, and geopolitical game.

“Nord stream — 2” to turn Germany into an important player in the European gas market. It was quite clear when Germany and Austria together a week ago, before Congress had to make a decision, declared that sanctions would entail “a new and very negative quality of the relationship between the United States and Europe.”

After joining Donald trump in the position of the tone of communication between the United States and the European Union became noticeably colder. The unpredictability trump, clumsy statements and populist isolationist rhetoric was poorly accepted in EU capitals. Ironically, however, a new ground for clashes in this time occurred in spite of, not thanks to Donald Trump, who, however, tried to soften the sanctions against Russia. His inexplicable passion for ancestral enemy gave rise to many more or less flamboyant conspiracy theories in American liberal media. A special Prosecutor is already investigating how close the interests of some members of staff of the President and his Semeia, and I think soon he will be engaged in and the personal relationships trump in this area.

The discord which arose between the US and the EU on the issue of energy, is very unfortunate. There is only one player who will benefit from the fragmentation of the EU and deterioration of relations between the EU and the United States: is Vladimir Putin’s Russia.

“Nord stream 1 and Nord stream — 2” more would tie the EU to the Russian energy market. American natural gas should be considered as an obvious and attractive alternative. And yet the EU such as Germany and Austria, energiepolitische prefer to tie themselves to an increasingly authoritarian Russia.

And it’s not even the fault of Donald trump.