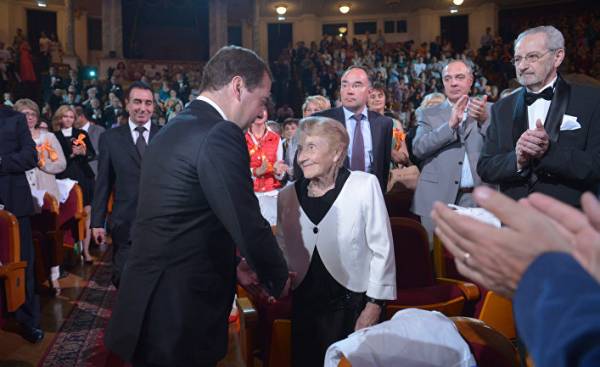 Dr. Alla Levushkina was not the first youth, when I decided to afford a little luxury. To be precise, it happened on the day of her 89th birthday. She decided now to go to work by taxi.

Strictly speaking, the blame for this was the staircase. Levushkina lives in an old building on the third floor, and, of course, she is not very fast. She had to hold on to the railing, slowly put both feet on the step. The woman seems almost fragile, she is so hunched and small. However, this impression is deceptive. Alla Levushkina can be quite hard, especially towards myself.

When I came down, feet need a rest. “Old age is not joy, she says. — The teeth fall out, joints cracking, my feet hurt”. Only when she gets distracted, doesn’t notice the suffering of old age. “Well, maybe except the teeth.”

Perhaps that is why Alla Levushkina and missed the time for the completion of professional life: she willingly distracted. Still there was no time to retire. And now it seems to be already late. On 5 may she was 90 years old. Now she will continue to work until his death. Maybe even prolong her life. Maybe she would have died, had ceased to be a doctor.

Since Dr. Levushkina loves her profession, she is 66 years old. The old lady still several times a week standing at the operating table. Other doctors who could be her grandchildren, an old colleague called “our superstar”. Because it is the oldest surgeon in the world.

While Levushkina chose a delicate specialty: she’s a proctologist, operates in the rectum. Many years ago the idea suggested to her by one assistant, because she was so small. “You have the right height for operations on the ass,” he said.

Of course, officially, this doctor has long since retired. When she retired in 1982, General Secretary of the Communist party was even Leonid Brezhnev and the US government was Ronald Reagan. In the German Bundesliga has won the German soccer club from Hamburg, and Steve jobs (Steve Jobs) was sold to the clumsy typewriter with a screen, called Apple II. Of course, Levushkina and had no idea about it. Because it was not interested, and “Pravda” wrote about the party congresses and the execution of the plan when harvesting potatoes.

In any case, in 1982, she saw no reason to stay home. Her colleagues sat with their grandchildren, and Levushkin was no husband, no children, no grandchildren. Her mother lived for almost a hundred years, and Alla thought it would be prudent to wait some time. In training she didn’t need. “Because the important things never change,” she says.

State clinical hospital №11, Ryazan and today is not a temple of modern high-tech medicine. At the entrance to the guard booth sits vahtersha terse. Visitors must pull out of the machine blue plastic Shoe covers and string them onto the shoes. Some medical equipment made in Soviet times. Also operating in which Levushkina spends part of their time, and desperately needs updating. The table wobbles, falls off from the walls paint. Therefore, the officials would prefer not to let journalists into the operating room. But Levushkina calm: “still working.”

Other she doesn’t know. In the Russian province of medical care has always been modest. Last year even President Vladimir Putin described the problems of health. However the last reform fizzled due to a new round of savings in the country costs were reduced by a third.

To be a doctor in the Soviet times was not considered a particularly prestigious profession, any driver of a truck received more. And today, doctors in Russia have not become rich. Monthly salary Levushkin is recalculated 500 euros, and in addition 200 Euro pension. Such salaries do not make this profession popular.

Doctors and nurses lacking everywhere in 2015, the Minister of health talked about 40 thousand vacancies for doctors. Also the workers at her hospital value skilled Levushkina. The chief physician of 60 years, he was she still an Intern. It is clear that she enjoys his privileges. In the morning she is often late because have to feed their cats.

When Levushkina studied in Moscow, the University was still called the “Medical Institute named after Stalin”. If you ask her about it, she remembers above all hunger. Just ended a war. Sometimes the students were allowed to sell alcohol from the laboratories. People did then it vodka, and with this money, the students bought their own food. Levushkina recalls the fish that they from hunger would eat bones and all. Sale of laboratory alcohol proves it still today, that Stalin is good to all people. “He cared about everyone,” she says. “Women were not afraid then to go out with them and nothing has happened.” Now she’s not so sure. All life would have seemed more complicated.

Levushkina revered Stalin even in the days when this love was not a good sign. Today the cult of Stalin more than meets the eye: ultimately, it is again considered politically correct to honor his achievements as a military commander. “We then lived in a large country,” she says. The successor to Stalin, Nikita Khrushchev denounced dictator that made Levushkina to denounce Khrushchev. “One of my uncle was in the Gulag,” she says. “But he never blamed Stalin personally!” When Levushkin invited to join the Communist party, she refused. She said she doesn’t want to belong to a party that cursed Stalin.

There were only a horse

After studying Levushkina as a young doctor was sent to the village — like so many others. Thus the Soviet Union was concerned that in the smallest Siberian state collective, worked doctor. She chose Tuva on border with Mongolia. There were no cars, no buses, and in the village there was not a single ambulance. There was only a horse. Levushkina and could not ride. “The horse will find a way” — claimed people. “And so it was,” she says. “I had no idea where I’m going, but I have never lost.” After five years in the wilderness, she returned to Ryazan.

Levushkina worked at the hospital and also in the plane of the ambulance. Flying doctors served the then outlying villages. Ryazan is only 300 kilometers from Moscow, but the distance in her area rather big. She loved the extra missions. One day she asked the pilot to do on the way back landing in the same field because I wanted to pick on a nearby meadow of lilies of the valley.

In Soviet times, the doctor’s visit was free, thank them small tokens. A kind of second currency has been chocolates and cognac, and Levushkina still believes that these gifts were the best sign of attention and respect. The habit of giving gifts exist today, but now people bring envelopes of money. Many doctors expect it, and negotiate in advance the cost of surgery.

Alla Levushkina is a big supporter of Putin. “How can he not like me?”- she says. “He lifted our country from its knees!” You may abroad a little obamaites Russia, she said. In her view, this corresponds exactly to the value of Russia.

Prime Minister Dmitry Medvedev she even once met in person, he handed her the award “For loyalty to profession”. Unfortunately, this crystal figurine was so heavy that someone had to bring it back to its place. Today this statue is in a box, buried under the mess on the bookshelf in a Studio apartment Levushkin.

At 36 square metres it can relax, except for eight cats. They had long since seized power. At night they sleep on it. When she eats, then they jump on the table. The apartment smells like cats, and quite strong. However, Alla Levushkina is not paying attention.

Sometimes comes to visit her old friend Vladimir Krylov. Then Levushkina just in case the old blanket covering the kitchen bench, because she’s not quite sure what the cat there didn’t do anything.

Krylov writer in honor of her 90th birthday published a brochure on older doctor. It’s called “Ryazan legend”. Krylov said that he was going to do after her death. The hospital should be assigned to her name, her name should be named and one street. Besides Ryazan certainly need another monument. Maybe with cats?

Alla Levushkina fun these plans. Until now, it has never really been sick. And of course she has a secret recipe for longevity: confidence. And sometimes brandy.