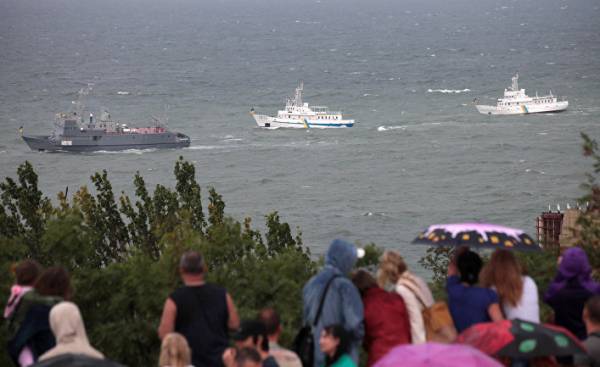 Two years later, I returned to Odessa, the pearl of the Black sea. On the plane from Warsaw next to me sits a Russian girl. She is sent to Bessarabia to my grandfather’s funeral. Between Russia and Ukraine there are no more direct flights, she has to fly through Minsk, Istanbul, Riga or Central Europe. She’s upset about the Russian-Ukrainian conflict, which disrupted family ties nearly two years: “We stopped talking to each other”. She admits that she does not support Putin’s Ukrainian policy, but at the same time disappointed at the decision of the Kiev authorities to break all cultural ties with neighbors: there are no more flights, information channels and social networks. Some published in Russia and books were also banned. She fears that Ukraine will eventually introduce visas for Russians, which may lead to the expulsion of thousands of Ukrainians from the Russian Federation. Two weeks later, Kiev expressed its commitment to permit entry for all Russian citizens.

Upon arrival at the airport I see that the new terminal is finally completed — at least in appearance: the works were not less than five years and stood for a long time because of corruption. To my great disappointment, the new terminal is still not completed, and you have to use what was left of the Soviet Union. Inside on the screens in the colors of Ukraine and the EU proudly flaunts the inscription: “Travel without a visa, Ukraine moving closer to Europe”. This achievement was a great victory for President Petro Poroshenko, and had a serious psychological effect on the population. The victims of the Maidan, finally, has borne fruit. The desire to belong to the Western world very much, especially among people under 40 years of age.

In the city centre, the first impression is that Odessa has regained its prewar vitality 2000 years. At the end of June on the streets you can see a lot of tourists from Europe, Turkey, Georgia, Israel, and even Belarus. Cafes and restaurants are filled, and everywhere peacefully waving the Ukrainian blue-yellow flag. No longer see any military or roadblocks or Pro-Russian graffiti. All signs of the war in the Donbass completely disappeared. Local entrepreneur Taras says that no one in Odessa is no longer committed to the return of Donetsk and Lugansk was not going to pay for the restoration of these two lost regions. “Anyway, Ukraine should respond to Russian aggression of terrorists and not let them advance further, he adds. — Mariupol must be protected. We don’t need war because it removes us from the reforms. This is the goal of Vladimir Putin to destabilize and demoralize Ukraine”.

“What about the Crimea?” Silence. It is evident that the annexation of the Peninsula left a wound, and in contrast to the Donbass to give it up don’t want to. “Crimea is an economic disaster,’ he says. — While it was occupied by Russia, it cannot develop. Russians prefer to go to the côte d’azur, not in the Crimea who are poorer in Turkey. Crimea will become a new Transnistria”.

On the streets of Odessa meet new police vehicles in the Western new York forms. Working in the Odessa police, the woman said that corruption significantly began to decline in 2016, however following the appointment of Sergei Knyazev as a result of changes in the government old practice once again gaining strength. As for city government, still headed by Russophile Gennady Trukhanov. Since then, he has appeared in the hands of the enterprise for production of paving slabs running along all of the beaches promenade was repaved again. Moreover, his plans do not stop. He wants to expand its activities and to fully peremestit the famous French Boulevard, which caused protests from the population.

Reaching in Carbunari, I re-meet Ukrainian pensioner (originally from Bulgaria), which in 2015 have asked me to take his three daughters to the West. His melancholy and nostalgia for the Soviet Union and Russian culture did not disappear. Thanks to Sputnik, he continues to listen to old Soviet songs and watch Russian television. He smiles at the sight of this propaganda, conscious of sounding false. The Russian media every day to talk about lost Ukraine and the lack of prospects of a sustainable peace.

He’s still sure that he was better off under the regime of Yanukovych. He still wants me to took his daughters? Eloquent silence. His daughter no longer dream of life in the West. In Odessa you can lead a pleasant life, and their work provides them with a decent living. Whatever it was, they would like to travel around Western Europe. The abolition of visas creates a sense of freedom, although two of them have already received Bulgarian citizenship in case of aggravation of conflict with Russia.

However, Poland and the Baltic States are doing everything to ensure that Russia’s plans failed, and Ukraine remained closely associated with the West. Signed by Kiev and Brussels, the Association agreement enters into force from 1 September. Political, academic and cultural influence of Poland manifests itself in Odessa more and more. The Turks can boast strong positions in the economy. Istanbul is financing the construction of beautiful gardens in the center of Odessa. More and more Turkish tourists go on a trip via the Black sea to enjoy the hedonistic atmosphere of Odessa. Ukraine does not require visas from Turkish citizens, and they can enjoy the “sins” of Western civilization, which President Erdogan seeks to eradicate in the country. His subjects are not indifferent to the Ukrainian beauty and relaxation of the warm nights.

The policy of Vladimir Putin was effective in the short term, undermining the spirit of the Ukrainians. But in the long run it is disastrous for relations between the two countries as led to the rise of Russophobic sentiments among the Russian-speaking population. The military aggression of Moscow not only violated the cultural and tourist ties between Russia and Odessa, but also led to a decline in Russian investments. The EU and Turkey quickly filled the vacuum. This immediately catches the eye, you only go to the supermarket. Products with the inscription in Latin on the shelves becomes more and more.

In this region of Ukraine is gaining strength the cultural revolution. Young people select us English and no longer afraid to smile to foreigners. Irreversible ties with the European Union will eventually end chronic Ukrainian corruption.

And if Russian aggression continues, it is not excluded that Ukraine once lateritium their alphabet to gain a firm foothold in the West.