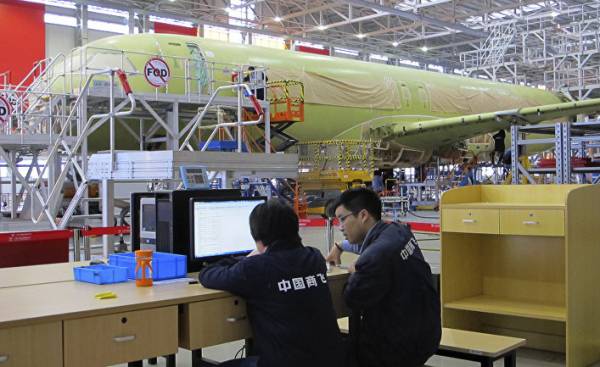 Judging by how the plane’s Keeper, Vladimir Putin and XI Jinping is a political project. Russia and China has big ambitions: they want to be in the top League of the few States with its own civil aviation industry on par with the US and Europe. For the sake of the ambitions of the country is even ready to unite, because alone, they do not overcome neither Airbus nor Boeing.

Yesterday, July 23, ended aerospace salon MAKS-2017; its main guest, as always, was Vladimir Putin. He looked at the fifth generation fighter T-50, listened to about medium-range passenger aircraft MS-21 and even looked at the Boeing booth. It seemed that the joint Russian-Chinese aircraft will also be paid attention. The plane, of course not. But for a year in the framework of this project, so much has happened (including with Putin) that it would be strange to ignore it. However, the Max information on a large plane that must work together to build Russia and China, appeared to be quite episodic. Got to Moscow Zhukovsky and impressive dimensions of the layout of the plane made by the Commercial Aircraft Corporation of China (COMAC).

The first layout was displayed at Airshow China in November 2016 — happened, we can say, Prime Minister. For this event in Zhuhai on one day arrived the Minister of industry Denis Manturov and the President of the United aircraft Corporation (UAC) Yuri Slyusar. Together with their Chinese colleagues they under the eye of the many cameras solemnly pulled off the layout of the red matter.

Layout COMAC arrived at Paris Airshow 2017, marking already the international presentation of the project. The layout stood on the stand of the Chinese aircraft manufacturer, where the background was footage from the meeting of XI Jinping and Vladimir Putin.

Separate question — the name of the aircraft. In the Russian version he’s just “wide-body long-haul aircraft” (SFDMS). In the Chinese — С929 (or С9Х9), that is the next in the series after recently taken off the C919.

At Le Bourget the layout of the aircraft, however, were LRWBCA (Long-Range Wide-Body Civil Aircraft; translated into Russian the same SFDMS). Unpronounceable abbreviation that in Russian that in English raises a question: when the plane appears official sounding name? Slusar says he has not thought: “the aircraft has no name, and we’re on the subject do not tense up. If you have some kind of fantasy [by name], I would be grateful. The Chinese, as people are fairly consistent, there are certain approaches to name their aircraft. We honor them”.

At Max, remember, the layout was not. COMAC in the Moscow air show did not participate, hence, their layout has not appeared. The KLA’s own haven’t already.

Take off on politics

Negotiations on joint construction of the aircraft led the country for nearly a decade. In 2009, Alexey Fedorov (then the President of UAC) predicted that the third player in the global aviation industry appears precisely “as a result of joint projects of Russia and China.” However, admitted that everything is very difficult: “For a country the creation of a large aircraft can be an extremely difficult task. But I can tell you what is the main difficulty [of the negotiations]: both Russia and China want to be a leader of the project. Although the best option — the risk sharing 50 to 50”.

A project several years had the status of “consultations”. Simply put, they do not do — oak, and Russia as a whole then more hopes were connected with the West than with the East (what is epic about the promotion of Sukhoi Superjet 100). China probably was not a large aircraft country, having strong engineering background, quickly gained competences in the aviation industry, in particular, has launched the program of regional aircraft ARJ21.

Putin at the meetings with Chinese leaders have repeatedly stated about the need to unite efforts to establish wide-body aircraft, “to take its rightful place in world markets”. In 2011, in conversation with Chinese President Hu Jintao, he noted that more and more is purchased from American and European aircraft, while “countries like Russia and China and needs to have its own production”.

In 2012, the authorities in China came XI. The theme of a large aircraft has not disappeared from the agenda of the meetings of heads of States and movements in the project has not increased.

The process accelerated markedly in 2014 under the influence of both internal and external circumstances. In both countries finally formed a large state conglomerates aviation industry; against Russia imposed sanctions Europe and the United States, and XI Jinping during his visit to the plant COMAC expressed regret that the absence of a private aircraft makes China dependent on foreign aircraft manufacturers. In may 2014, when Putin was in China, the KLA and COMAC signed a Memorandum on cooperation. In June 2016, and again during Putin’s visit to Beijing — the country has reached an intergovernmental agreement. Then there was the clarity of a joint venture (JV): the project has no leader, everything is divided equally.

And in late 2016, Putin told reporters that some of the dividends of Rosneftegaz will go to the creation of a powerful aircraft engine (a thrust of 35 tons), which “will allow our Chinese friends to create a wide-body long-haul aircraft” (about the engines you need to write a separate story, given that China is going to build your engine). Rosneftegaz is 100% owned by the state, owns a controlling stake in Rosneft, a stake in Gazprom and inter RAO. According to Putin, Rosneftegaz is another budget of the government. This is the source of funding for projects of regional Il-114 and wide-body Il-96-400, which is actively lobbying for Deputy Prime Minister Dmitry Rogozin.

By the way, return to Il-96-400 is due to the continuing competence for Russian-Chinese aircraft. This argument, however, has occurred recently — I think in hindsight (that is the motive, it could not be). And another point: at the dawn of negotiations, Russia proposed to build a wide-body aircraft based on the Ilyushin Il-96, but the Chinese refused, insisting on building from scratch.

Judging by how the plane’s Keeper, Vladimir Putin and XI Jinping is a political project. Russia and China has big ambitions: they want to be in the top League of the few States with its own civil aviation industry on par with the US and Europe. For the sake of the ambitions of the country is even ready to unite, because alone, they do not overcome neither Airbus nor Boeing.

In early 2017, the KLA and COMAC established the China-Russia Aircraft International Commercial Corporation (CRAIC). “But craic in English- “the feast”. A good name for a joint project!” — kidding evil tongues. Project participants, however, are serious — opened an office, has appointed leadership, distributed work. They try to maintain the target line, when everything is 50: 50. The office is located in Shanghai, close to the line of the final Assembly plant for the COMAC. In Moscow will open an engineering center. CEO of the joint venture appointed Manager of COMAC, Chairman of the Board of Directors of the Manager of the KLA. The Board of Directors of eight people, four from each side.

“The division of work, which relates solely to the airframe, we agreed that wing, center section, empennage — is the production in Russia. The fuselage and final Assembly is in Shanghai. There are huge plant, well-equipped, which, in our opinion, allows to implement the third project [along with the Assembly of ARJ21 and C919],” — said Slusar in Le Bourget. The place chosen for the Assembly, due to the proximity to target markets. And fears that the plane will eventually become Chinese, Slusar calls unfounded: “We will be able to penetrate the market, which sold ten times more aircraft than the Russian, and we will have a guaranteed demand for many years to come, even if only in the Chinese market. Such opportunities for any producer, they should value it”.

Slyusar does not undertake to assess the contribution of each party: “We believe ideology; despite the fact that it is a project of the two companies or even two countries, to create the plane can only one command. Do not get two teams one plane”. A few philosophically Slusar says about the financing of the aircraft: “This is a capital-intensive project, of course. You have to imagine that the plane is from 8 to 12 years is being developed, then about 30-40 years and produced 40-50 years of flying. A story about a new airplane for the ages, for centuries. Here, all calculations are conditional as from the point of view of forecasting, and the effects that you get.” According to preliminary calculations, the project should be 13-20 billion.

The construction of the aircraft must begin with the basic version: a capacity of 280 seats, a range of 12 thousand km, and the Completion of conceptual design and his defense is planned for late 2018. The first firm contract is expected in 2019, the first flight in 2023, the start of deliveries in 2026-m, it was discussed in the feasibility study of the project (feasibility study), which was prepared by the KLA.

In the Russian Pro-state media (in Chinese, they say, too) is still existing aircraft dubbed “killer” Airbus and Boeing. There was only confusion in what types of aircraft have to “kill”. Based on the statements Slusar, that the A350 and B787. If you listen to the top Manager of COMAC On Boji, A330 and В777.

All of these aircraft belong to the category of long-haul wide-body. But there is a fundamental difference: the A350 В787 novelties of the global aviation industry, more than 50% made of composite materials (which implies a slightly different production cycle). В777 A330 and planes of the so-called previous generations, with a predominant use of aluminum. In General, to talk about the competition early Russian-Chinese aircraft will enter into service in ten years (as stated in the feasibility study); almost all of that time Airbus and Boeing will sit idly by.

But even before entering the market, the project can face many pitfalls. And who knows what he will be able to get around and what — not. The most obvious risks such. The political project for a very long time, what happens to him when you change leaders? Economic — the only source of financing the budget; and Russia and China are experiencing not the best times in the economy, and forecasts are not encouraging. Corporate — suffice it to recall how difficult it is get along with Germany and France in Airbus; and that countries with a common culture. Finally, the mental — language barriers, difference of behaviour and other seemingly little things that can complicate the process until it stops.