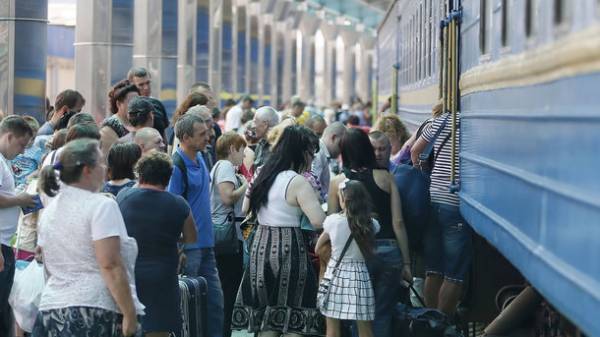 In the last month of summer Ukrainians, despite the “dead season” in politics and Economics, will find many new. Most changes relate to the transport sector will open new flights, rail routes and even a single object infrastructure. There are changes in the legislation. “Today” figured out what awaits us in August.

LAWS. The most significant political economy event since August 1 will start to operate the free trade area (FTA) between Ukraine and Canada. According to first Deputy Prime Minister Stepan Kubiv, July 22 the canadian side Ukrainian side has sent a note about the final ratification of all necessary documents and confirmation that the FTA will work from August 1.

Economist Alexander Okhrimenko said “Today” that the basic goods that are exported from Ukraine to Canada — this corn and wheat, sunflower oil, honey, alcohol, as well as engineering products and warm clothing. And in the Country of the maple leaf, we buy frozen fish, seafood, tractors, medicines.

“The volume of trade between countries is small, only about $30 million and $170 million for import, but after the inception of the FTA it will increase significantly”, — predicts Okhrimenko. Deputy Minister of economic development and trade (MEDT) Nataliya Mykolska expects that in the next 5 years the trade turnover will increase by 10 times.

It will be easier and cheaper to rest and medical treatment to disabled children from August to places of rehabilitation will deliver for free not only are such children residing in rural areas and all. As we explained in the press service of the Ministry of social policy, this issue must be addressed local authorities.

TRANSPORT. Another flight will connect Ukraine and Poland. Famous Polish airline from August 4 launches flights Lviv — Bydgoszcz (1.5 hours). Flights will be twice a week — Monday and Friday. Yesterday, on August 4, a one-way ticket was 1081 UAH.

And “uz” August 1, plans to send the first train Lviv — Krakow. As said the head of the ULTRASONIC Wojciech Balczun, its main feature — not wasting time on the permutation of cars with a wide Ukrainian to the narrower European gauge, as the railway used sliding wagon truck, capable to change the width between the wheels (increasing or reducing it by 8.5 cm).

It will be easier to get from Kiev to Zaporozhye and back by high-speed train “intercity+”. BONDS added 9 flights there and back on Tuesdays and Fridays, assigning dopiest. But the citizens drive Kiev and Kharkov, on the contrary, will be more difficult — a two-storey “Skoda” (“intercity”) to them will not go, flight of August cancelled due to insufficient load.

Also people will be able to get from Ukraine to Moldova since the end of August (exact date still unknown) are expected to start moving on the new bridge across the Dniester river border between the Ukrainian and Moldovan Bronnytsya village Unguri. This was stated by the President Petro Poroshenko, has opened a new border crossing point “Kuchurgan — Pervomaysk” between the two countries.

But for a backpacker on August 1 starts nutsprogramme “Tourist Ukraine”. As explained by the Director of the Department of tourism and resorts Ministry of economic development Ivan Liptuga by downloading the free app on your smartphone or computer, you can plan a trip to any city of the country, book tickets, book hotel. And for “ins” (geolocation) tourists will be able to earn bonus points and receive discounts.

Fee for gas and heat in question

Unclear remains the question of the licence fee for the use of consumers of thermal and gas networks. Subscription fee, according to the Memorandum with IMF, the government also had to enter in August. The national Commission on regulirovaniyu energy and komuslug not yet commented on whether it will be from August to pay for heat and gas.

According to energoexpert Valentin Zemlyansky, if the heating issue to be solved — people will pay in the non-heating season, symbolic amount (conventionally, 100 UAH/month.), to energy had the money to repair the heating systems, but will pay the same amount less when at home served warm, with gas the situation is more complicated.

“Fee for gas, which the NERC tried to introduce six months ago, was too high for those who use only gazplita (40-44 UAH/month. plus the current price of gas according to the norms of 30 UAH per person per month), so it has been cancelled, explained Zemlyansky. — Correct monthly fee for gas to include the cost of cubic meter of gas: the higher the consumption, the higher the fee as it was before. Otherwise, small customers will pay for large”.