The working class pushed the UK to exit the EU and helped Donald Trump to become President of the United States. In France the presidential election, this category of voters could become the greatest threat to the Republican candidate, françois Fillon, who is now, according to polls, is leading in the presidential race. This writes Bloomberg, Recalling that the economic program of the Fillon similar to therapy, which international institutions years begged Paris.

But for many French people with low incomes, it seems a threat to their living standards.

The newspaper reminds that the wife of Fillon recently opened criminal proceedings on suspicion of illegally obtaining 500 thousand euros in a time when she worked as an assistant Deputy. The allies of the candidate-the Republican fear that it will strengthen the French have the feeling that Fillon indifferent to the difficulties of ordinary people. And it jeopardizes his chances of winning the election.

Polls indicate that the working class in France is the largest group of voters. And most of its representatives do not support the candidate-the Republican.

The publication notes that this may play the leader of the radicals of the “National front” marine Le Pen tried to repeat the success of Donald trump. “If we continue in the same spirit, we push the entire middle class into the hands of the National front,” said Rachida Date, which was a member of the government led by Fillon.

“If marine Le Pen becomes the candidate, which will offer wages, jobs and tax cuts, then watch out, we’re gonna crash” she said.

Bloomberg writes that the annual income of workers in France is less than 20 thousand euros. This salary, according to data from the national statistics Agency, almost one third of 44,8 million registered voters in the country. The working group includes builders, factory workers, clerks, supervisors, waiters, etc. According to the head of the center for survey IFOP Jerome fork, only 11% of voters support Fillon. 40% of them support Le Pen.

Earlier it was reported that Francois Fillon officially became a candidate for the French presidency from the Republicans. The main rival Republican can become Marie Le-Pen.

Earlier РОР2017 the poll showed that the French conservative Francois Fillon to win far-right candidate marine Le Pen if they both come out in the second round of the presidential elections in may. Data suggest that Fillon in the second round will gain 63% of the vote, while Le Pen with 37 percent of the vote. 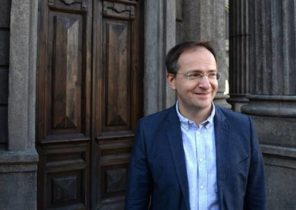