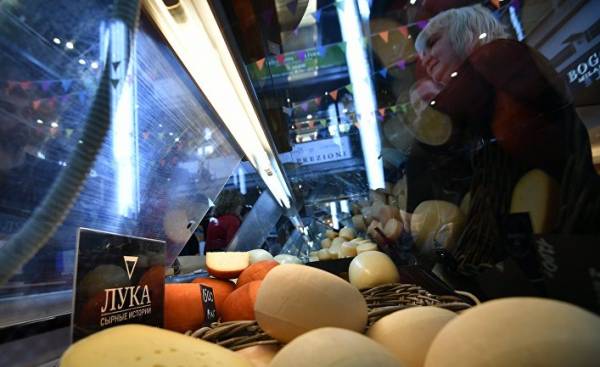 Recognizable round shape. They originate somewhere in the depths of the covered market of Obninsk (85 kilometers South-West from Moscow), which is considered one of the main scientific centers of Russia: in 1954, there was launched the first nuclear power plant. Anyway, in our case we are not talking about high technology, but about lying on the shelves of cheeses, which, however, requires no less attention.

Three years after the introduction of Vladimir Putin’s embargo on European food in response to Western sanctions (their reason was the annexation of the Crimea and armed conflict in the East of Ukraine) cheese market in Russia is booming. Sad times when you can buy a poor excuse of cheddar with no taste and smell, in the past: “import substitution” showed itself in all its glory. The Camembert came with a stamp “made in Russia”, followed by the Saint-Marcellin. Soon you can expect Chaource. On 30 June, the Kremlin extended the embargo until the end of 2018.

From Philipp Nissen (Philippe Nyssen) is in the hands of all statistics: consumption increased from 790 thousand tons in 2013 to 1,055 million tons two years later, an increase of 34%. National production rose by 103%, while imports naturally fell by 45%, from 370 thousand tons in 2013 to 205 thousand tons in 2015, a year after the embargo. In this situation, the 51-year-old businessman from Antwerp who is engaged in the real estate industry and works in Kazakhstan and Russia since 1992, has decided to invest in the production of cheese, seeing that “starting in 2014, the shelves empty.”

“We are just at the beginning”

The company Grand Laitier modestly since January 1, Obninsk in the basement of the market and now has a dozen employees. Shop with refrigerating chambers covers an area of 300 square meters and creates a slightly surreal atmosphere of the underground laboratory. Business partner Philip Nissen Frederic Piston d Eaubonne (Eaubonne Piston Frédéric d) closely follows all the instructions of the French master cheesemaker. He worked here for three months and eventually decided to move to Canada, but in September it should take the place of another specialist. “We are just at the beginning,” — said a businessman from Antwerp. At the end of July the volume of production should be 50 kg of cheese per day.

To Finance this business venture was not accepted by any foreign investor. “Putin…” — throws up his hands Phillip Nissen, who spent 750 thousand Euro from his own pocket and making big plans. 20 million euros for five years. He has received the right to purchase 400 acres of agricultural land and 4 hectares for the construction of future factories, which is planned to produce 8 tonnes of cheese a day (including goat).

That company has its own novelty: “Bud” appeared by mistake varieties of Camembert, which in this case is not deprived of a very pleasant taste sensations. Released and Fontainebleau, cream cheese with garlic and herbs. The future plans include reblochon, Munster and raclette.

“The Russians — the perfect consumers: if they see something new and can afford it, definitely try,” says Philip Nissen, again buried in the statistics. The current level of consumption in 7 kg per capita (24 kg in France) opens a wide field for maneuver.

In any case, to start such a business requires a lot of courage (or carelessness). The fact that everything needs to be done from scratch, including to provide the supply of milk. In Russia there are few companies, which represent an intermediate between the small farmer and the huge industrial enterprise. After reviewing all options, the founder Grand Laitier decided to go back in the Kaluga region, which is most familiar. There are working about 80 farms. The first agreement was signed with the owner of the herd to 100 head 60 kilometers, in the small village of Myatlevo.

In the area is 160 foreign enterprises, facilitated by special measures to attract investment from abroad. In addition, the Kaluga is located adjacent to the Moscow region and its 30 million inhabitants (almost half of the population of France).

There remains the question of implementation. Production is focused mainly on Moscow and its accustomed to French cheese, the middle class, but is still at the handicraft volumes, although growing every month.

“The import has created the need, embargo — deficit”

Two months ago, Sebastien Gumbel (Sébastien Gumbel) opened a store Coucou fromages at the Danilovsky market in Moscow, which became a favorite place of the capital of “La Boheme” and boasts a scattering of small restaurants. This Frenchman lived in Russia for 17 years and worked in such diverse industries as office supplies and tourism. Now he, too, decided to enter the promising market of cheese. “The import has created the need, the embargo shortage,” he said. For a month he sold one thousand head of raclette from Smolensk and 6 thousand heads of Saint-Marcel from Grand Laitier.

Around it offer a variety of other cheese, including traditionally produced in Krasnodar “Camber Lefkadia”, and a scattering of fresh goat cheese that you give to try with a compelling argument: “French technology”. Anyway, prices still remain high (on average 18 euros per kilo of raclette), and the clientele is wealthy. Offer for 250 rubles Saint-Marcellin at odds better.

In any case, the competition promises to be tough. Russian producers are becoming more. One of them even bought a thousand of the French goats. Besides, on the protection of the “brand” to speak of. So, the name of French cheeses for the most part protected only if is tied to the territory: Normandy Camembert, Crottin de Chavignol, etc. “as for the rest, suffice it to portray similar name in Cyrillic, and you will not SAP,” emphasizes sébastien Gumbel.

What if the embargo is removed? “I’ve got another year” — meets Philip Nissen. He relies on competitive production at low wages (an average of 350 euros) and low taxation. Thus, the French cheese “made in Russia” confident in 2018, which, incidentally, does not necessarily mark the recovery of imports.