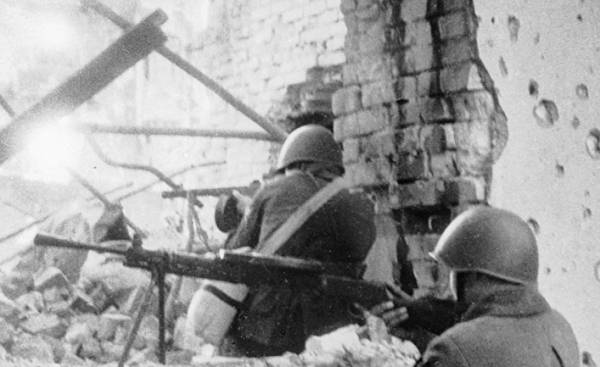 When the wall began to crumble, and even iron bars on the middle floors were heated and slowly began to SAG, the crowd holding the Fort rushed through the main entrance and ground floor Windows to the street. It was exhausted, broken people who are tired, barely stay on his feet. They were unarmed, and their faces distorted with terror, blackened by soot. They hail was sweat. They raised their hands, swayed, stumbled and fell from the stairs to an open area. They survived only 40 out of 300. Then another 15 minutes came the groans and frantic cries of those who found themselves surrounded by fire, who covered the blackened walls, and who was injured by our shots. They were consumed by fire and nobody could help them”. (Vö lkischer Beobachter, in the fall of 1942.)

This excerpt from an article in the German newspaper describing the battle of Stalingrad and as if anticipating the events in Berlin three years later, I, dear readers, let me start this article about the battle of Stalingrad with a few unusual perspectives. Not from the perspective that ignores the suffering and horrors of war, witnessed by the Soviet soldiers as it may first seem, but with a completely different point of view, which will reveal to you, the reader, the eyes and allows you to see more.

On 17 July, the world 75 times paid tribute to the memory of the battle of Stalingrad. It is surrounded by many myths and is part of the truth of the winner, which was the Soviet Union — a monstrous dictatorship, quite similar (if not worse) Nazi.

Now we are in the endless steppes deep in the Russian rear, where it grows only sagebrush, and hundreds of miles stretches only a monotonous region. This region is so vast that the soldiers of the German army fell into despair and depression, moving forward, even when the Red army was a head broken and its soldiers because of the absolute amateurism of the Supreme Soviet of the political leadership, millions were taken prisoner. Infinite Rus was literally swallowed up by the Germans.

Nevertheless, just over a year, the Germans managed, stepping, to reach the tsarina, as it was originally called Stalingrad, while other German units, acting in the framework of the operation “Edelweiss” was coming to Baku. German soldiers photographed with camels, and time zones separated them from home just as thousands of kilometers.

Thus were created the conditions for the beginning of one of the most horrific battles of the largest military conflict in human history. The goal was set — to conquer the city named after the Soviet dictator, and thus to cut a strategic transportation route — the Volga.

The desire to capture Stalingrad, the Wehrmacht was guided by a whole set of ideological and strategic considerations. For the same reasons, the Soviet troops fought heavy defense, which eventually culminated in the first major victory of the red army. This win not only returned the epaulets to many Soviet officers, but also contributed to the fact that the commanders received before the unprecedented autonomy in matters of warfare. The fact that Stalin, unlike Hitler finally allowed his commander to do what they knew how and what was prepared.

However, the victory at Stalingrad would not have been if the allies are not sent to the Soviet Union (and he had faced tremendous difficulties and has lost most of its industrial and food base) weapons, ammunition, food, fuel and all the things without which it was impossible to conduct modern mobile warfare.

However, the role played by not only supplying weapons, but also a very important struggle waged by the allies in North Africa. Victory there thwarted an attempt to strike in the second direction strategic blow to the resources of the world, who fought with the Nazi military force. The enemy was defeated, and was saved important for the armies of the allies, that is, for the red army, resources.

But in truth the winner, which taught us for decades, had its pathos, and it is in its “dissected” part of the story so that they were satisfied with the Communist regime. Based on this concept, the Soviet Union’s victory were granted the dubious right to turn those countries where got his tanks in his own province.

In Russia in this sense still remains the same, because her version of the story starts in June of 1941, when former Nazi ally invaded the USSR, and the friendship between Adolf and Joseph came to an end. In this framework fits the corresponding ideologically narrow view of history after June 1941. The broader context, which literally plays a crucial role for the overall assessment of the events is completely excluded.

But if we turn to military operations and battles that took place in North Africa both before and during the battle of Stalingrad, we understand that neither the scale nor the involved military forces they did not concede the battles on the Eastern front. If to speak about their results, the battles in North Africa even surpass the achievements on the Eastern front, for example, the number of captured Germans and destroyed German military forces that, over everything else, could be involved on the Soviet front, and this radically changed the balance of power in favor of the enemy.

The objective of the Afrika Korps and Italian forces in North Africa was to seize the oil fields in the middle East and the Suez canal, as well as to cut the communication between Europe and India. The success of these forces would have led if not to the defeat of the allies, then at least the perpetuation of the conflict, and thus to millions of new victims.

The end of these military operations after the victory of the forces of the British Commonwealth forces at El Alamein and after the landing of American troops in North Africa meant for the Axis forces losing more than a million soldiers and 2,500 tanks and a large quantity of ammunition, which was of strategic importance for the victory of the Axis and were not used on the Eastern front. And the losses the enemy suffered in the period when its peak reached the battle of Stalingrad, marked the turning point in the Eastern front of world war II.

In addition, it is important, in my opinion, to emphasize that our Czechoslovak soldiers fought against a common enemy on the African front and the Eastern. However, the paradox of history that those Czechoslovak soldiers were less than those of the Czechs who, under the pressure of circumstances had served in the Wehrmacht and after the war, despite the fact that they risked their lives for our freedom, the Communist dictatorship has subjected them to reprisals.

The purpose of this article is not to cast doubt or downplay the first successful battle of the red army. However, it is important to note that the victory over the Afrika Korps and Italian troops helped to break down some of those huge ticks that Germany was going to close, thereby cutting off the allies from much of the resources, primarily oil.

The same tactics eventually led Nazi Germany and its satellites to defeat. After was captured the Romanian oil fields and the us air force began to strike at refineries that produce synthetic fuel the German war machine started to slip, until finally we stopped.

History — teacher of life (Historia magistra vitae), as says the ancient Latin wisdom. It would be good to us once once and for all to take from history the lesson and accept it for what it is. I’m talking about the naked truth, red army raped, hanged in the courtyard of the Pankrac prison, not robbed by the minions of the lie, not the maligned “prostitute” Communist and Nazi ideology, not in prison or camp, the truth, which for centuries was uncomfortable for criminals.

This also applies to ourselves. Our past is imperfect, but we have to know him to finally recover from it.