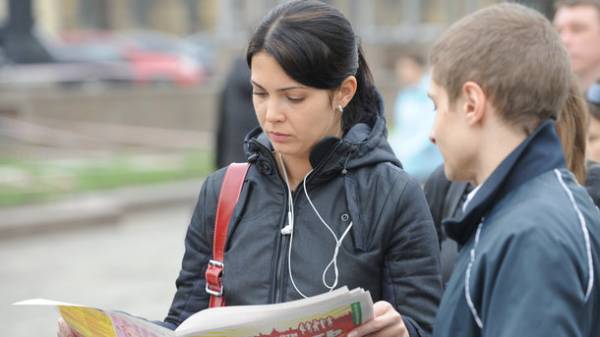 The average salary in Ukraine – more than seven thousand hryvnia, said Deputy Prime Minister Vladimir Groisman. The unemployment rate for last year has decreased, and the minimum wage “grown up” twice. The website “Today” found out how much the Ukrainians do not have official earnings and who earns the most.

The only 330 thousand unemployed is about 9% of the total number of able-bodied Ukrainians. The average unemployment rate in the European Union – 8%, leaders on this indicator in Europe are Greece (24%) and Spain (approximately 20%). According to official figures, Ukraine’s unemployment rate is far from the last place. But it is worth noting that these figures only take into account those who came to the employment Centre and register as unemployed.

“The number of people employed today is 52.6% of the number of working-age population in Ukraine”, – said the Minister.

There are several reasons for the high real unemployment. First, the state of the labor market and low wages. This leads to the fact that millions of Ukrainians looking for work abroad. Secondly, the shadow employment. According to a survey conducted by HH, only 54% of respondents get “white” wages. Ukraine, as has informed earlier “Today”, entered the top countries with the highest level of shadow economy.

“The employment center often turn those who have the opportunity to receive assistance for the period of the official search of work. Few people know, but my wages pay the fee, including the insurance Fund in case of unemployment. If resigned by agreement of the parties, can three months after that to receive your full salary from this Fund,” says HR expert Alexander Belous.

“Few people know, but my wages pay the fee, including the insurance Fund in case of unemployment. If resigned by agreement of the parties, can three months after that to receive your full salary from this Fund,” says HR expert Alexander Belous.

Public assistance receive 265 thousand unemployed Ukrainians, the average size of payments – 1921 hryvnia, according to the data of the state statistics. The employment Centre can also help with the job search. However, lucky to find a job is not for everyone. At the end of last month, the employment Center helped to find work only 8.6% unemployed. Officially in Ukraine openly 66.5 thousand vacancies. It turns out that on one working place claims at least five people.

Despite this, the labor market experts assess the situation more optimistic. “If you don’t want a hundred thousand money to find work. The work is a lot of it. Employers complain that can’t find a decent, adequate employees. Or just adequate” – sure, HR expert rabota.ua.Tatyana Pashkina. Analytics HR portal work.ua also note: the number of vacancies in Ukraine is growing, and therefore the business is gradually developing. “In the first half of 2017, the number of vacancies increased by 29.3% more than last year”, – said the Director of development Sergey Marchenko. Traditionally, the easiest way to find a job working different specialties. So, the number of jobs at gas stations for several years, grew by 192%.

It’s harder to find work in small towns and villages. And average salaries, says Alexander Belous, there can be two to three times lower than in larger regional centres.

“The average salary this indicator measures the average temperature in the hospital. Somewhere cold, and somewhere in the middle of the average normal. Of course, the “average salary” shows the situation in the labour market, but to focus on it when looking for a job is not worth it. There is such a figure as “market wages”. For loader in Kiev is one amount for a porter in some apostolove – another. And a porter with a top Manager salaries are different,” says Alexander Belous.

The average salary in different spheres of economic activity:

The functioning of libraries, archives, museums and other cultural institutions – 5017 hryvnia
For the 12 months of the average salary grew by 37.2%, a record high over the past few years. In the budget resolution to 2020 predicted that within three years, the average Ukrainian salary will reach 10 537 USD.

Recall that shortly Ukraine will significantly increase the salaries of the Prosecutor. As recalled by the Prosecutor General Yury Lutsenko, the Parliament adopted a law, which soon must be signed by the speaker and the President. Prosecutors in the regions will receive, from 23 to 33 thousand hryvnias, the head of the Department from 18 to 33 thousand (dependent on experience). Senior investigator for particularly important cases will receive up to 29 thousand.

About how many Ukrainians are below the poverty line, can be read here.