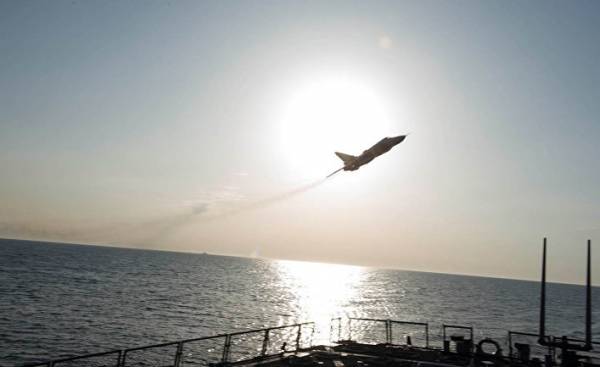 Military transport aircraft Gedeminas already suffered a lot. Aircraft of the Lithuanian air force, especially in demand when the situation is delicate. On a transport plane of a type С27Ј Spartan soldiers are the largest of the Baltic States went to foreign operations, it also transported humanitarian aid in crisis regions such as Afghanistan or Central Africa. In the course of NATO exercise Ramstein Alloy 4 aircraft were launched from the Lithuanian military airfield in Siauliai for a special operation — as bait in the skies over the country.

In the course of military exercises NATO fighters perform the task of identification and maintenance of civil aircraft that have lost radio contact with the ground. He was in the airspace over Lithuania on the Eastern border of NATO signals without identification. Therefore, in the skies over the Baltic sea fighter planes have to fly near the unknown plane. With the help of visual contact, pilots should check comes from the suspect aircraft in danger or has been whether aboard an unusual situation.

“These exercises allow us to perform complex actions for the coordination of flights in which the safety and risk prevention in the airspace of NATO”, — says British NATO General Tickle paddy (Paddy Teakle). The fact that this day is held as a doctrine, may at any time become a reality. According to NATO, in 2016 in the European airspace has seen more than 500 incidents in which was lost the communication signal with civilian aircraft. In 76 cases, it was necessary intervention.

In the German airspace it comes to difficult situations. In March in the skies over Northern Germany for a minute I lost contact with a passenger aircraft, for security purposes, the alarm was raised. In the skies the fighter-interceptors, a nuclear power plant has been temporarily disabled.

Weekend double-the sky was raised the aircraft of the Bundeswehr due to the loss of signal to communicate with the passenger aircraft. On Saturday the two fighters forced a Korean airlines plane EN route from Seoul to Zurich to land in Stuttgart. The reason was the broken contact with the Boeing 777, and then in the sky up interceptors. On Friday evening the Egyptian airliner was the reason that rose into the sky two supersonic fighter of the Bundeswehr on the border between Hesse and Bavaria. In this case, the relevant service was unable to establish radio contact and raised the alarm of the air force.

Causes of communication failures may be diverse: a hijacking, a technical problem or simply a crew error. In the absence of reaction of the pilots trying to get in contact begin to sound the alarm. For security reasons, the interceptors NATO are in a state of constant readiness to clarify the situation. If necessary, they must push the plane to force him to change course.

Individual States give the order

If the plane is on the terrorist or other reasons used as weapons, for example, is directed towards the NPP, we are talking about the case of “treason”. Acceptance of orders to fight back lies in the area of national responsibility — in Germany the decision taken by the Minister of defence. NATO in this case has no right to make decisions about the involvement of weapons.

Standardized actions in case of loss of contact affect not only civilian aircraft but also military vehicles. In the sky over the Northern part of Europe is following the management of NATO’s air defense March in uedem on the lower Rhine. There is an international team of soldiers on the radar screens of air traffic control over the North and Baltic sea down to the Alps. The area to the South is controlled by the Spanish Torrejon near Madrid.

And security of NATO airspace, the so — called air police of NATO — is made from the control center. About 870 starts were recorded in both centres over the past year — a number not seen since the cold war. In most cases, the cause of starts was the Russian military aircraft that were approaching the territories of the NATO countries.

More Russian fighters since the beginning of the Ukrainian crisis

“There was an increase in Russian activity,” said Tickle. The reason for this was primarily Russia’s military intervention in the Syrian conflict. According to him, in the sky over the Baltic and the Black seas since the crisis in Ukraine there are more Russian military aircraft. However, the commander of NATO in this regard, concern is not expressed. “I don’t think it was a surprise, was too dramatic or it is necessary to emphasize,” says Tickle emphasized quietly. “We can do that. We have the tools on the ground to deal with it.”

After the annexation of Crimea by Russia in 2014, NATO in solidarity of the Alliance has strengthened control of the airspace over the Baltic countries Estonia, Latvia and Lithuania. Elsewhere, NATO troops do not come to Russia as close as in international airspace over the Baltic sea — there at the narrowest point the distance less than five kilometers.

From Western Alliance is concerned that the Moscow aircraft often fly without warning or electronic signals. Also, according to NATO, avoiding the communication signal. Thus, their air route invisible navigation systems for civil aviation security, which, unlike military radar, can’t detect planes flying with no identification signals.

If Russian planes close to the borders of the Baltic States without identification, NATO gives the command to start the emergency group. It is formed from two armed fighters, located in the Estonian ämari airbase of the Lithuanian and šiauliai. Within 15 minutes they have to be in the air is a NATO standard for emergency measures. Which center it will start, decided March in uedem.

During the exercise, the alarm raised groups of both centres. After some time in Amari into the sky with a deafening noise rise two German Eurofighter aircraft, and in šiauliai — two Dutch F-16. At a speed slightly less than the speed of sound they take a course on the Baltic sea and looking for Gedeminas. “Bait” is circling at the altitude of 7000 meters above the clouds.

Aircraft flying from Edema and center air traffic control in Lithuania Karmelava. Both points are supported during the exercise reconnaissance aircraft NATO AWACS system, which are utilized as a flying military command and control. AWACS — air warning NATO.

Gedeminas easy to recognize. A military plane with a length of almost 23 meters, a height of nearly ten meters and a wingspan of about 20 meters. A strong push twin-engine plane rises from the runway, takes to the rainy weather, high and circling at a speed of 500 km/h over the Baltic sea.

Suddenly beside him as if out of nowhere there are both Dutch fighter, some time later the German group. F-16 and Eurofighter appear to the right rear and closing fast. The pilots shake their wings of fighters, doing arm and flying parallel to the plane to identify and follow in the airspace.

“We’re getting closer and clarifies what kind of machine we’re dealing with,” explains the Dutch pilot. Wherein the determined type of the aircraft and the position of the machine. Evaluated and safety. Because the NATO fighters constantly switched on the transponder, which transmits an electronic signal and flight data military vehicles and civilian air traffic controllers.

Why Estonia is a model pupil of the EU

In the second half of 2017 Estonia takes over the presidency in the EU Council. With the figure of nine percent of GDP, the country has the lowest public debt in the EU.

Just a few meters separate both emergency groups from the edge of the wing Gedeminas. NATO pilots in their grey helmets and black viewfinders in the cockpit you immediately notice. Considerably and also the arms on the body of the aircraft. Among the standard weapons of the NATO aircraft, placed on suspension, are gun, infrared short-range missiles, the electronic system of defence and medium-range missiles.

Pilots can use the weapons only in extreme cases — in the case of the attack on them. According to the Dutch pilots, while before the really serious incidents in the air is not reached. They also say that the aggressive incursions of Russian aircraft into the airspace of NATO over the Baltic countries practically does not occur. And a valid Russian attack on the former Soviet republics, according to military experts, is considered unlikely.

But what achieve their Russian maneuvers in the air? And why incidents occur in the Baltic sky? “I can’t give an answer, whether it is part of the training, or it’s deliberate, designed to ensure that we took to the skies of interceptors. We can only speculate,” — said Tickle. But, he said, it happens for a reason. “There is no technical reason to fly included without transponders”.

And NATO planes flying without transponders

Russia rejects the accusations and NATO aircraft also often turn off the transponders. President Vladimir Putin last fall complained that NATO had not accepted the offer to fly over the Baltic sea only with the included signal. In this proposal belonged not to him but to the Finnish President Sauli Niinistö (Sauli Niinistö).

Flights without identification signals is not prohibited in international airspace. However, according to NATO, they are a danger to civilian air traffic. Therefore, the interceptors NATO act as air police — as they do in civil patrols.

Only information in the cockpit

Who or what is expected of pilots in case of alarm in the air, they learn in the cockpit. “During the operation, never knowing what awaits you, says the Dutch pilot. — It is a challenge. There is little information, but there is a lot of adrenaline and ultimate power.”

After a rendezvous with another aircraft on the emergency frequency and by visual signs of attempts to make contact with the pilots. “When we know their intention, and communication restored, and then we let them go,” says the Dutch pilot. Then the fighters turn around and go back to the center of the home.

After an hour of spectacular flight ends. F-16 and Eurofighter last time I shake my wings and move away. Gedeminas begins its descent and landing in šiauliai. The job is done. To the next job.