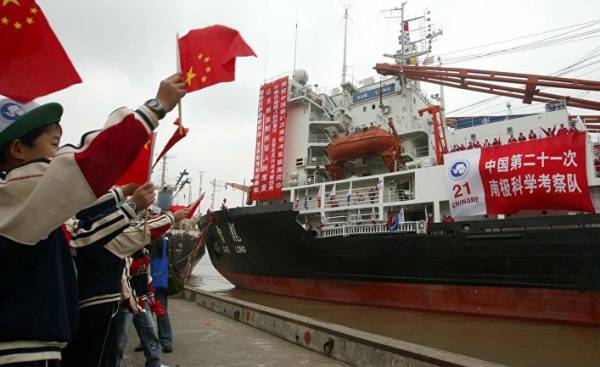 In recent years, the struggle for the Northern regions deteriorated. It is a struggle for oil, gas and fish resources in addition to the desire to demonstrate political and military muscles.

However, rapid warming in the Arctic due to climate change impact, according to scientists, the weather and temperature in many countries. This has led to a growing interest in the Arctic.

In 2004 China opened a research station at NY-Alesund (Ny-Ålesund) on Spitsbergen. Now the Chinese should lead the first expedition, during which will be held the entire coastline around the North pole on the icebreaker:

“China is a world power and clearly considers such voyage as a statement about Chinese interests,” — said in an interview with NRK Arild Mu (Arild Moe), senior research fellow, Fridtjof Nansen Institute.

Mu takes part in a research project, which aims to determine the impact of increased China’s interest in the Arctic.

First of all, according to the China Polar Institute, that the expedition should gather more information about climate change in the North.

In the expedition involved about 100 researchers. China has also invited scientists from Norway and some other countries, says Director of the Norwegian polar Institute Jan-Gunnar winter (Jan-Gunnar Winther):

“Almost all studies in the Arctic relevant to climate. We don’t need to study sea temperatures and ice. Climate change is clearly visible in the entire ecosystem,” says winter.

The temperature in the Arctic rises twice as fast as in other parts of the world, and scientists are very concerned about the changes that they observe. Therefore, winter believes that Chinese research expedition is very important:

“The number of expeditions in this area is very limited. Therefore, data collection is a great value,” says winter in an interview with NRK.

He believes that one of the reasons that the Arctic show interest in more and more countries, is climate change, which for many countries will have a direct impact.

“They directly affect hydropower in Norway, agriculture in China, monsoons in India, and heat waves and drought in southern Europe. So in the Arctic, one way or another, “tied” all countries”, — said winter.

China — the country emitted into the atmosphere most of all climatic gases. Many hope that the country will assume a leadership role in the fight against global warming after U.S. President Donald trump said that he wants to withdraw the U.S. from the Paris agreements.

Besides the main task, the participants of the expedition will take samples to identify places of a congestion of garbage in the Arctic.

“Snow dragon” will be held in the North-West passage.

First this way sailed Roald Amundsen, who had thrown anchor in 1903 and carried out the expedition on a converted schooner “Joa” for three years.

Many hope that as the Northern sea route and North-West sea route through the Arctic will become an important Maritime route between Europe and Asia decreasing surface ice due to global warming.

If Amundsen had spent on the expedition for three years, “Snow dragon” plans to overcome 19 thousand nautical miles in 83 days, according to Chinese state TV channel CCTV.

“After this expedition we can say that we have completed our expedition, whose purpose was to sail around the Arctic,” — said yesterday, Xu Ren (Ren Xu), Director of the Chinese Polar Institute, at a press conference in Shanghai.

China has previously carried out seven expeditions to the Arctic, but now the Chinese first went to the Arctic where the ice is more than the Northern sea route.

Natural resources such as oil, gas and fish are among the reasons that led China and some other countries to stretch to the North:

“China’s interest in the Arctic is a manifestation of the growth of the country as a whole and its growing presence throughout the world. The Arctic is just one of the many regions where there are Chinese people,” says Mu.

Navigation in the area is also not as great as many in China hoped a few years ago:

“I think in the end they became more realistic, in the Arctic and know now what is possible and what is impossible,” says Mu.

However, Moo thinks that we can expect in the North, the growth of Chinese investment and activity in General. Some international observers point to China as a possible military threat in the Arctic. Mu is emphatically denied:

“They are connected to the Pacific ocean, not the Arctic,” says Mu.