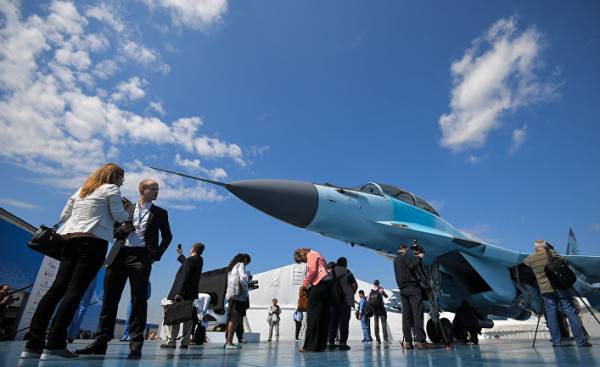 Every two years held in Moscow Airshow, where the Russian government has demonstrated national achievements in the aviation industry, is actively seeking new platforms for cooperation with other countries. At the same time, promotes the penetration of foreign technologies in the field of development of aviation. The 13th air show “MAKS”, held 18-23 July in Moscow, too, has a special significance.

Still due to the lack of government financial and political support Russia has faced pressure from American and European competitors. It is noticeable that the Russian aviation industry is struggling to not go into decline. Despite the fact that Russia has a good scientific and technological base, it is obvious that it is inferior, when compared with American or European achievements in the aviation industry. However, the Russian government began reforming the defense industry, and it’s already brought some fruit. Russia is pursuing a reorganization in the field of aviation, the aim of the new project is to promote research, development, the rise of innovative potential. Russia successfully revives the aircraft, and in the first half of 2017 the people will see, as the aviation industry began to develop.

The strategy provides for countermeasures in response to the four challenges faced by the Russian aviation industry.

1) Provide the internal market and at the same time to strengthen its position in the foreign market; based on the principle of “market modernization”, to expand cooperation with developing and developed countries; change from the industrial model of the industry through the creation of a developed system of suppliers and internal optimization organizations.

2) to reorganize the domestic aviation enterprises in the future, the assets concentrated in a single aircraft-building concern, with the aim to increase the competitiveness of state aviation production.

3) to Attract foreign investment and funds of domestic private investors to invest in aircraft building.

4) to Improve the talent pool and strengthen the technical basis, budget to invest in advanced research programmes, financial reward achievements in the field of scientific research.

Moreover, to compensate for a lack of innovative capacity, the Russian government since the end of 2008 and now adopted by more than 170 laws in encouraging innovation. All these efforts were aimed at obtaining a result. At the moment the Russian defence industry took the first steps to formatting the technical platforms: organized different associations, funds, companies (including “industrial development Fund” and “Foundation for advanced studies”, similar to the U.S. Fund preliminary research DARPA).

Having secured the powerful support of the Russian aviation industry began to rise. MS-21 is considered a masterpiece of Russian aircraft industry. We can say that this is the latest model product for civil aviation. The aircraft has the following advantages over competitors: increased the size of the fuselage, advanced aerodynamics, and a competitive price. The developer declares that the MS-21 allows to reduce fuel consumption and reduce the time spent in the airport by almost 20%. Test flights were successful. Will soon begin testing turbofan engines PD-14, designed for installation on the aircraft MS-21. After the MS-21, Russia plans to launch a new series of passenger aircraft Sukhoi Superjet 100, Il-114 and Il-96.

As for military aircraft, the development of multipurpose fighter T-50 (PAK FA) and strategic bomber, the PAK DA is in the first place. The test aircraft is almost over, in future they will join the ranks of Russia’s existing military equipment. In addition, it accelerated the upgrading Russian air and space forces. In 2016 the Russian government in the amount purchased for 69 fighter aircraft of a new type, these are mostly su-34, su-35S. This year it is expected that Russia will gain about 80 fighters.

The company “Helicopters of Russia” resorted to different ways to create new technology and to accelerate the process of building helicopters. The company hopes to meet the demand for domestic and foreign markets, to make Russian helicopters competitive. First, when designing the Mi-35, Mi-28 and Mi-26 were used composite materials for the rotor blades and the hatch. Second, when you create a helicopter was introduced and applied new methods of production, among them the most famous is the use of 3D printing. Russia has used 3D printing to create ventilation systems, interior finishes, and also some parts of the helicopter. Third, in Russia, we opened a specialized center focused on developing innovative strategies for the construction of helicopters. This is a very important step towards the transformation of Russia into the center of the helicopter. Only with the use of scientific and technological base to improve productivity, quality of production and minimize costs.

Like other countries, Russia believes the aviation industry a priority sector. The need and increased demand forced the Russian government to urgently revive the aviaproizvodstvo, taking a lot of effective measures for the development of industry. Russian aviation has already made a big step on the way to update. Moscow air show is a good occasion once again to verify this.