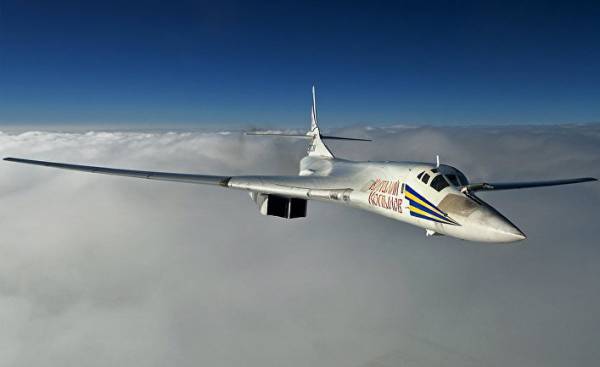 It seems that the flight of Tu-160 bombers in the skies over the Baltic sea — a demonstration of the strength of the country. The Finnish military expert pulkki of Arto (Arto Pulkki) notes that the reaction of Finland indicates certain changes in the position of the country.

Military exercises of Russia in the sky over the Baltic sea — a common occurrence. However, according to Finnish experts, the participation of a bomber in flight on 15 June was a clear show of force. We are talking about the Tu-160, fast strategic bomber that can be equipped with 16 nuclear warheads.

June 15, Air force of Finland has published pictures of the airspace of the Gulf of Finland and the Baltic sea, which was captured Russian equipment.

Military expert Arto of Pulkki says that by themselves, the exercises — ordinary event for Russia. According to him, Russia wants to demonstrate his strength, indicating that if necessary it is possible to strengthen the defense of Kaliningrad by redeploying fighters and bombers from other regions of the country.

“Tu-160, however, participates in drills rare. Russia knows that the flight of the fighter will be closely monitored. When he rises in the air, the media will always react, and Russia is counting on”.

A show of force is important both for the domestic and foreign policy. So Russia wants to attract the attention of statesmen and citizens, as well as cause response from the international community.

If the Tu-160 is not used directly for military purposes, it is not only about training flights, but about showing strength. In the air were also seen by the plane of distant radar detection and management A-50 jet bomber Il-22 and different fighters, for example, used some time in Syria, the fighter-bomber su-34.

“Russia supports a menacing way. So I want to show that Russia is still a major military power. Syria, too, plays an important role in creating that image,” says Pulkki.

In a statement, Russia is an interesting detail

The Russian defense Ministry on the same day made a statement which was addressed to three countries: Denmark, Finland and Sweden.

“Strategic bombers-rocket carriers Tu-160 Air and space forces of Russia on Thursday carried out planned flights over neutral waters of the Baltic sea. The bombers were accompanied by su-27 fighters of the Western military district and the plane of distant radar detection and management A-50 military transport aircraft”.

Military expert Arto of Pulkki believes that, in addition to the participation of the Tu-160, these exercises are another distinguishing feature. In a statement, Russia said that it complied with all the rules of being in the air. He can’t remember that neighbor used to be so stressed up for their rights and desire to abide by the rules.

“All flights of the aircraft are performed in strict accordance with International rules of using airspace over neutral waters without violating the borders of States”, — reported in the Ministry of defense of Russia.

From 1 to 16 June in the Baltic sea region has been a naval NATO military exercises Baltops, which was attended by 14 countries. Training flights Russia was a kind of protest against the NATO exercises.

Pictures of Russian equipment, published by the Air forces of Finland, according to, according to Pulkki of certain changes.

“Sooner is not always reported even on the air violations. It seems that the defence Forces of Finland, the Air force and to some extent foreign policy leadership changed its approach to the reporting of such cases,” explains Pulkki.

According to the expert, now the line of Finland resembles the position of the Baltic countries air space which controls the NATO Alliance.

Plot the neutral airspace between Finland and Estonia is quite narrow and ill-suited for exercises. Nevertheless, Russia uses it to move its equipment to Kaliningrad.

“This is close land, and the passage of military equipment makes us react and representatives of the Baltic States. No doubt, the military presence in the Baltic sea region have increased.”