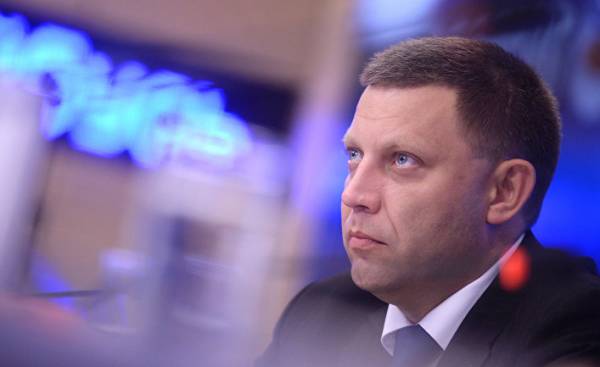 The trilateral contact group (TCG) on settlement of situation in Donbas on Wednesday, July 19, in Minsk discussed the statement of the head of the self-proclaimed “DNR” Alexander Zakharchenko about the creation of the project “little Russia”.

The TAG urged to refrain from any confrontational statements that contradict the Minsk agreements. This was reported by the press of secret representative of Ukraine in the TAG Daria olifer on his page in Facebook.

“Statement on so-called “little” not in harmony with the fundamentals of the Minsk process and does not contribute to the settlement of the situation in the Donbas. An attempt to separate the Ukraine is not new and in 2014, she failed. Instead of talking about reintegration, which aims Minsk process, representatives of the ORDO declare some individual tracks that are contrary to the undertaken obligations”, — stated in the message.

Olifer announced that representatives of Ukraine at the meeting of the TAG urged the Russian Federation to condemn this statement Zakharchenko.

In addition, during negotiations the Ukrainian side in the framework of the Trilateral contact group continued to insist on non-recognition of documents of certain regions of Donetsk and Lugansk regions (IDLO), the rejection of the seizure of the Ukrainian enterprises, ensuring the work of the observers of the OSCE SMM, the release of the hostages, the demilitarization of Debaltseve and the investigation into the death of Malaysian “Boeing” flight MH17.