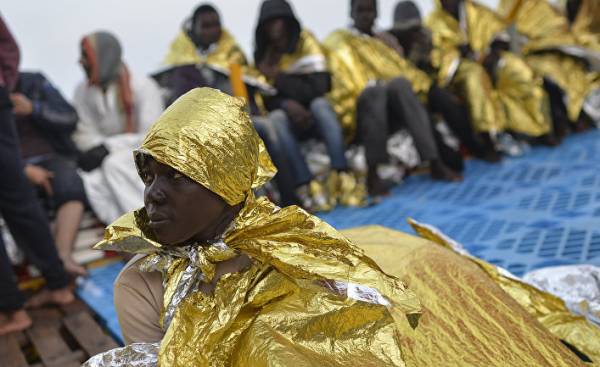 With the beginning of the year to Italy by sea arrived at least 95 thousand illegal immigrants wanting to get to the coveted Europe. The number of these refugees, traveling in a path mainly from the Libyan coast, is still expanding. Earlier in the week the foreign Ministers of EU countries gathered in Brussels in order to once again find ways to solve this problem and try to somehow limit the number of illegal migrants.

However, it seems that to do this and failed: there is no consensus on this issue was never reached. The only resolution that was accepted by the foreign Ministers of the EU States, looks more than strange. The EU Council has decided to ban the supply to Libya of goods that “can be used for illegal transport of persons, in particular inflatable boats, and portable engines.” While the EU may impede the exports of these goods even if they follow through their territory in transit.

This unusual step by European diplomats, apparently, was desperate, as all previous attempts of the EU to create in Libya a full-fledged coast guard, which would control migration flows to Europe, end in vain. The fact that the official government in Tripoli is simply not able to follow the whole length of the sea border of the country. The only thing that now remains is still capable of the European Union is the extension of the EU mission to support the training of Libyan border guards (EUBAM Lybia). This European assistance to Libyans in effect until the end of 2018, although it is now obvious its low efficiency.

Against this background, particularly noteworthy was the reluctance of Italian parties to renew in Brussels the action of the naval operation EU control of migration flows “Sofia” (EUNAVFOR MED). This operation was launched in 2015 to combat illegal carriers of people and to rescue refugees. However, in practice this goal was not achieved. On the contrary — military ships of the European Union now save illegal immigrants are not in the open sea, and almost at the coast of Libya, when the fragile boats and rafts with migrants deliberately overturned. By this time the smugglers or already gone, or they do not even go sailing. European sailors have no choice but to take of people in distress to his vehicle and deliver them to ports in Italy. It is clear that the Italian authorities this situation is absolutely not satisfied, so the mission of “Sofia” for them is a big question.

At the same time official Rome threatened not to allow in their marine waters of foreign ships with illegal immigrants on Board. This threat in Brussels, no doubt, took with the utmost seriousness.

It seems that to protect from the influx of migrants “transit countries” of the European Union really going to act independently. So, on Tuesday, July 18, the Minister of internal Affairs of the Republic of Austria Wolfgang Sobotka (Sobotka Wolfgang) has officially declared that his country “will close the border crossing on the Alpine Brenner pass, if the number of illegal immigrants, on his way from Italy to Austria, will continue to grow.”

“We can in 24 hours to block the border our soldiers and begin to implement strict border controls with the help of police and customs”, said the 61-year-old Austrian conservative politician. According to him, one third of all migrants who go through Italy to Austria, “enters the country with the help of criminal gangs”, and 80% of them have “no chance of getting refugee status” in the European Union.