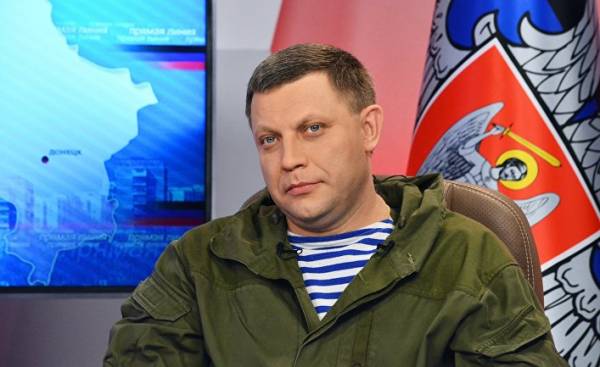 After the new Russia — Ruthenia. With the new maneuver, the Kremlin increases pressure on Kiev. However, Berlin and Washington are demonstrating unity against Ukrainian politicians. But she has another idea.

New round in fight against Ukraine, Moscow began on Tuesday a provocation. It’s neither more nor less than the creation of a new state. Little Russia — the so-called state, on Tuesday, said Alexander Zakharchenko, the self-proclaimed head of the Donetsk people’s Republic. The use of the term, rising to tsarist times, means that Moscow continues to apply to Ukraine. In the nineteenth century the Ukrainian national movement spoke out against the use of this offensive word and popularized the name “Ukraine”.

After all, “little Russia” meant Moscow’s policy of Russification. Zakharchenko has made it clear that the project “the Ukraine” must act not only in respect of Donetsk and Lugansk regions, which for three years will be introduced a state of emergency. It should cover the whole of Ukraine — if she will ever be conquered.

Earlier, Moscow has not achieved much success with another high-sounding neoplasm. In may 2014, the people’s Republic declared itself the new Russia. The rest of the territory of Ukraine, such as Kharkiv and Odessa, had to be enlisted during the military offensive of the separatists. However, a year later the project was closed. Quick conquest failed, Moscow overstrained. Instead, in the Belarusian capital a truce was agreed and adopted the road map for settlement of the conflict. “Minsk-2” agreement, which yet is shared by all parties, even if its implementation is not progressing.

Not all Pro-Russian parties were aware

And now — a new aggression, in all probability, the secret campaign of Moscow. Not all those concerned were aware of. Because when Tuesday morning in Donetsk questionable representatives of the Congress of Ukrainian regions took a decision on creation of the new state, among the separatists in the neighboring Luhansk was turmoil. They did not send representatives to Donetsk, because I did not know about the meeting of Congress, says Vladimir Degtyarenko, Chairman of the National Council LNR. Regarding the feasibility of establishing a state, he expressed “serious doubts”. Such things can not be solved, not considering the opinion of the population. And, in the end, valid the Minsk agreement, which has no alternatives.

The Ukrainian President said during the state visit to Georgia, the project “little Russia” expects the same fate as “new Russia”.

The separatist leader Zakharchenko is not a “political figure, and a puppet that conveys the message of the Kremlin”, quoted the press Secretary of the President Poroshenko. Ukraine will regain sovereignty over the Donbas and the Crimea.

Will there be finally buried “Minsk-2” a new initiative on Tuesday in Berlin was not yet known. The creation of a new state “absolutely unacceptable”, said the representative of the government.

The Federal government expects that Moscow “immediately condemn this step and announce that she does not respect and does not recognize”.

The unexpected decision, however, was not. Even at the summit of “big twenty” in Hamburg, the participants noticed how bad Vladimir Putin said Poroshenko. He planned military expansion areas. In response, the Chancellor stated that the expansion of the territory of Russia was much more significant. Putin in Hamburg even threatened that he recognized the territory of the separatists as a state, if Kiev does not go to meet him. The creation of “the Ukraine” in the light of these statements it seems provocation.

The unity between America, Germany and France

Especially important are the assurances of the US that they want to more actively negotiate with Berlin and Paris policy towards Ukraine. This was confirmed by the Secretary of state Rex Tillerson on the sidelines of the summit of “big twenty” in Hamburg. While Washington has no plans to touch the existing “channel format”. Tillerson received instructions from President Donald trump’s politics towards Russia and Ukraine.

Recently, Tillerson has appointed former us representative to NATO, Kurt Volker (Kurt Volker) new Commissioner for the Ukraine. Walker is the USA a “hawk” policy in relation to Russia. Fears of Germany, the former head of oil company Exxon Mobil c experience of doing business with Russia will stick to soft policy towards Moscow, was not confirmed. On the contrary, Washington is said to be planning the supply of weapons to Kiev, including anti — tank missiles.

In addition, Berlin is trying to put Poroshenko’s political support. The idea being put forward by Angela Merkel on the sidelines of the summit in Hamburg — the appointment of special envoys on Ukraine in the countries “big seven”. They must address the scope of reforms in Ukraine and thereby to increase external pressure for progress in reforms. This idea belongs to Poroshenko, who plans two years later to run again for the presidential election. Can be assigned to the representatives in such areas as economy, energy, health, anti-corruption or decentralization. This initiative is supported by Canada, where the vast Ukrainian minority. In Hamburg Merkel has secured support from the British Prime Minister Theresa may. It is unclear whether to participate in the project, countries such as Italy, which took a more Pro-Russian course.

The role of the special representative from Germany will carry the former Prime Minister of Saxony Georg Milbradt (Georg Milbradt). An economist by training, over the years, he visited Ukraine more than ten times that number have visited the regions where he advised mayors and NGOs on various topics such as decentralization, local government or regional reforms.