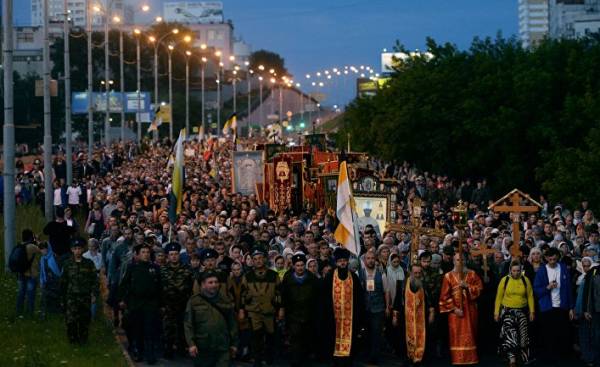 Holding the icons, crosses and portraits of the last Russian Tsar, tens of thousands of believers committed in Yekaterinburg procession with a length of 20 kilometers in the 99th anniversary of the execution of Nicholas II.

Early Monday morning, July 17, believers are passed from the execution of Nicholas and his family members to conceal their remains.

This year Russia celebrates the 100th anniversary of the Russian revolution, in connection with which there is not ongoing debate about how modern Russia has to consider the events of 1917 when the February revolution the deeply unpopular Tsar Nicholas II abdicated.

After the Bolsheviks seized power in the country, the Royal family was taken into custody, and in July 1918, when the White army moved to Ekaterinburg, all Imperial family was shot.

Now the image of Nicholas II, whom historians criticized as a weak leader and which the Soviet authorities have long been positioned as the last ruler of a brutal, repressive system, is experiencing a revival, as evidenced by the number of faithful participating in the procession.

Believers walked for four hours until he reached the place of concealment of remains of members of the Royal family, where today stands the monastery, which held a prayer service.

In 2000 the Russian Orthodox Church canonized Nicholas, his wife Alexandra and their children to the saints.

Meanwhile, one of the signs that Russia still can not decide on their attitude to the conflicts of the turbulent era of political change, is the fact that one of the stations of the Moscow underground still bears the name of Pyotr Voykov — Bolshevik who had arranged the execution of the Royal family. Activists have repeatedly filed a petition for the renaming of the subway station.

Among the new supporters of Tsar Nicholas II was Natalya Poklonskaya, a former Prosecutor of Russia annexed the Crimea, and nowadays the Deputy of the State Duma, in the office which is a portrait of the last Russian Tsar.

“This is the love that is in hearts and souls, is the love of our Holy sovereign, to our country,” she said before the procession in Yekaterinburg, which she attended.

Poklonskaya became one of the strongest opponents of the film of Russian Director Alexey Uchitel, which tells about the novel of Nicholas and ballerina Matilda Kshesinskaya and which should soon be released. Poklonskaya and other conservative Russian politicians called for the ban of this film, claiming that it denigrates the memory of the last Russian Tsar.

A group of Patriotic Russians even put forward the idea of restoring the monarchy in Russia. Extremely religious, the financier Konstantin Malofeev opened a special school on the outskirts of Moscow, where children have additional lessons on the history of the Russian monarchy and where they are prepared to ensure that they could become the future elite of tsarist Russia. Malofeev believes that Russia will soon return to the monarchy, and even offered to make Vladimir Putin the king.

Putin attempted to isolate individual episodes of Russian history, which his fellow citizens can be proud of, condemning the 1917 revolution, commending the achievements of both, the tsarist and Soviet regimes and lowering his darker moments.

Praising the “stability” Putin has spoken many times about the dangers of political unrest — both those that happened in the past, and those that are possible in modern Russia.