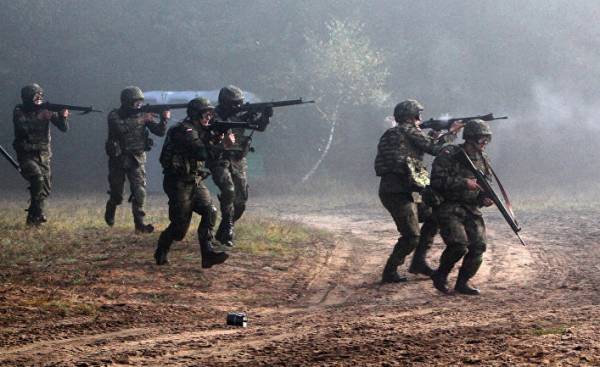 The most important for the security of Lithuania’s problems — domestic social and economic, and not a threat to Russia. In case of war, Lithuania will protect fewer people than two years ago, the majority remain passive, and if they want to defend the country — will not know how. This is one of the ways primitive and superficial assessment of a new study. Argue that such assessments have delayed the publication of its results.

A few weeks ago in Parliament, three committees held a General meeting to discuss the threat of Pro-Russian propaganda and the ways of dealing with it. At the meeting of the parliamentary Committee on national security and defence (PKNO), organized by its Chairman Vytautas Bakas, invited the representatives of the Committees of science and education and cultural experts from universities and representatives of the concerned departments.

Among them was the researcher of the Lithuanian social research centre Dr. Diana Anusauskiene. She is the Director of the study “Subjective security in a changing geopolitical context: characteristics, shaping factors and strategy created by individuals.” Study it with Agla Vileikiene, Laima Nevinskaya and Ingrida Geciene prepared and submitted last year. The survey involved 1009 inhabitants. In the article on this study in the journal “Philosophy. Sociology”, it is said that it investigated the “subjective perception of security by residents of Lithuania.” Everything is built on a psychological belief, the feelings of the people, not on objective reality.

Members of PKNB have read this study in may of this year at a closed meeting. Furthermore, I do not publicize this study to avoid false interpretations. “There were some opinions that it is too sensitive, do not rush. But I think we need to talk openly about issues that call the study: is social and the silos of information that pose a threat, it is impossible to hide, as there is evidence that such studies in the regions of Lithuania has a certain unfriendly state, he was aware of the situation and the mood. We need to know to solve the problem. It seems that politicians of such studies still did not know,” said Bakas.

Residents said the problems and threats

The study discusses such phenomena as the soft power of Russia and unfavourable for Lithuania stereotypes, the attitude of Russia and neighbouring countries, the Lithuanian army and citizenship, critical security issues in Lithuania and the EU. If you take data out of context, it is possible to interpret them so that the Lithuanians are more afraid of social and economic problems rather than threats from Russia, For example, the biggest problem, according to respondents, emigration and unemployment — 90%. Then there is crime, energy security, poor energy situation, poverty and discrimination with alcoholism. 21 problem the threat from Russia was named the 16th.

Anusauskiene no secret that such research data can become a “treasure” for the Kremlin’s media, who will interpret the results in their own way. She is a specialist noted that it is impossible to interpret these data superficially. “Ask about each item separately how important it is? So, the respondents all seemed important,” he said. But she said that after grouping the responses revealed: the threat of military invasion from Russia in 2016 is understood as the largest for personal safety — it is feared the 21% of respondents. To the question about what they feel about Russia, 15% of respondents answered that they were afraid of her aggressive policy. Only after that they pointed out other threats — crime and criminogenic situation (15%), safety in the place of residence (14%), quality of life and economic situation (12%), health problems (6%), immigration crisis, and terrorism (3%).

In addition, the first five questions “what is the first word comes to mind when you hear the word Russia?” two are associated with negative phenomena — conflicts and aggression. 29% of respondents are afraid that Russia could attack Lithuania, and the war begins. Energy dependence on Russia called 13%. The ban on the import of Lithuanian goods to Russia and trade restrictions worried 11%, and Russia’s influence on policy of Lithuania — 9% of survey participants. Damage to the environment from the Kaliningrad region (nuclear power plants, pollution of rivers) was evaluated by 6%, Russia’s influence on the ethnic minorities — 4%. 3% felt that because of Russian propaganda, residents of Lithuania will be less support the Western democratic countries.

When and where you feel safe?

In addition, according to Anusauskiene, the survey revealed certain paradoxes. Safer people feel in their immediate environment — 91%, in your residential area — 82%, Lithuania 63%, EU 45%, and in the world — just 32%. According to him, the fact that people feel much safer in the immediate environment, this is a paradox, because there is a lot of crime. “It is likely that the more distant surroundings, the more a sense of security is not a reality, and with imaginary threats which derive from the media,” — said the sociologist.

However, the study showed that at the beginning of 2016, 39% of respondents felt safe. Compared with the data of a survey conducted 15 years ago, this number has doubled: in 1999, only 18% claimed to feel safe, in 2002 — 20%. Compared to 2002, a clear change in the threat assessment. In 2002, the issue of national security indicated only 1% of respondents, and the greatest threat was considered a social and economic safe place of residence, level of crime, poor economic situation, concerns about rising prices, health problems.

According to the teacher of the Institute of international relations and political science of VU Thomas Janeliunas, it should not be surprising. “These trends have long been established. This is what people face in everyday life, it is more urgent than the abstract potential threats, which may or may not be,” said janeliunas. The value of nostalgia According to Anusauskiene, the study showed that the most important factors influencing subjective safety is age, place of residence, family financial situation, nationality and attitude towards the Soviet time. The last factor shows that the favorable attitude to the Soviet time, the been more skeptical a Respondent refers to Lithuania, the allies and Vice versa — the more favourable for Russia.

According to the Deputy of Laurynas Kaunas, this shows how important nostalgia for the Soviet era, and the impact and harm Russian channels. “Confirmed a causal link between the positive assessment of the Soviet time and indifference. What Russia is seeking through nostalgia for the Soviet era, its new concept, such as “Russian world” movies, series and simple indifference — not to do anything, to stay in the Eastern, not the Western cultural space,” said Camunas.

The influence of the media on these settings is significant, but it is worth considering that sometimes different sources use for comparison information. After the media read information about Russia, 38% of respondents feels great concern about the security of Lithuania, 45% see the media panic on this issue. Russians and poles are less worried and more think that the media stir up the mood, causing panic.

20% of the respondents indicated that the news reinforces the confidence that Lithuania will be able to protect themselves. This means that the people trust the allies. For example, only 17% of survey participants believe that residents of Lithuania are ready or completely ready to repel aggression of the enemy, naysayers 53%. Opportunities of the Lithuanian army are estimated better — 31% believe that the military is prepared to defend the country, 42% doubt. But if the Lithuanian army will be to defend together with NATO allies, the lap — 48%, and I doubt only 19%. The study found a link between pride in nationality and willingness to defend the country. 39% of those who are proud citizen of Lithuania, going to defend the country, 17% no.

In addition, we found out that 20% of disillusioned patriots who are not proud of nationality, will go to defend Lithuania, and 24% are disappointed — will not go. Pleased with the attitude of the poles, the Criterion of nationality is also important in the evaluation of pride in citizenship — if a group of Lithuanians it is in the range of 52-56%, a considerable percentage recorded in the group of Russian and Polish. 47% of poles and 37% of Russians are proud of Lithuanian citizenship, 39% of poles and 27% of Russians are ready to defend Lithuania in case of military threat. For 35% of poles and Russians approve of the return of compulsory military service, a group of Lithuanians such — 54%.

Who will defend Lithuania in case of a threat?

Janeliunas drew attention to the fact that when assessing the nationality, age, financial status and place of residence, the eye caught a few things. The majority of people of all nationalities in the event of a threat will remain in Lithuania and will try to protect his family. Lithuanians (21%) more poles (9%) and Russian (2%) intend to stay in Lithuania and in arms or otherwise to defend the country. Russian (24%) than Lithuanians (17%) and poles (10%) tend to leave the country in case of threat. Young people (under 35 years) more elderly tend to stay in Lithuania and to protect the homeland. The older people tend to stay, but nothing to do. People with high incomes are more likely to defend the Motherland with arms in hand, than the poor.

The poor tend to leave the country or stay and do nothing. Kaunas residents (30%) and Vilnius (26%) are more likely inclined to defend the homeland with weapons in their hands. Residents of small settlements are more likely to stay and take care of the family or to do nothing. If to summarize the results, the defenders of the Motherland will be mainly Lithuanians and poles are partly men, partly residents of Vilnius and Kaunas younger than 45, more wealthy, advocating for democratic values, people are happy with their lives. Portrait of a passive group is different: older than 45 years, mostly Russian and partly Polish, poor, inhabitants of small settlements, who believe that in Soviet times was a better life or people who are dissatisfied with their lives. 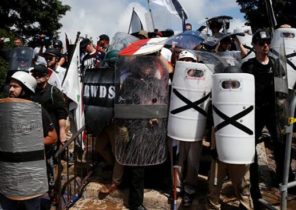