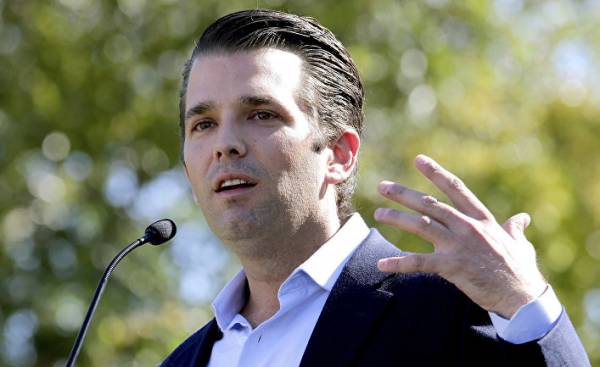 Last week the White house had to keep the defense in connection with the publication of information about that during the election campaign Donald trump Jr. met with Russian lawyer to get dirt on rival his father’s, Hillary Clinton.

According to representatives of administration of the trump, that meeting was justified by the need to find compromising information on political opponents — these all politicians during election campaigns.

Earlier this week, trump Jr. said that the meeting ultimately “not failed” and that the Russian side was not going to pass the Americans compromising information on Clinton.

Democrats criticized the meeting, not paying any attention to the statement trump Jr. and calling it undisputed evidence that during the period of the election campaign headquarters trump conspired in Russia.

New details of that meeting even more heated speculation and theories about the conspiracy, despite regular statements to the White house that the campaign headquarters trump not cooperated with Moscow.

The meeting was part of a larger lobbying campaign, which involved several representatives of Moscow, however, still remains unclear exactly who was present at that meeting.

According to various reports, the meeting was attended by eight people. Below we will explain who was it and what do we know about these people.

The New York Times first reported that the President’s son met with Russian lawyer Natalia Veselnitskaya. First trump Jr. told the publication that it was “a short introductory meeting” with Russian lawyer, where were discussed the issues of adoption.

However, the New York Times also reported that on the eve of the meeting, Trump Jr. pledged to pass some kind of dirt on Hillary Clinton.

On Tuesday, July 11, trump Jr. published e-mails with a British publicist Rob Goldstone (Rob Goldstone), who took on the role of facilitator in the organization of the meeting. These letters, which he published on Twitter, confirmed that Trump Jr. had promised to send compromising information on Clinton.

As claimed Veselnitskaya and trump Jr., Kushner (Jared Kushner) was present at the meeting very long.

Kouchner did not specify the meeting in the application for obtaining of access to secret information when he was appointed senior Advisor to the President of the trump. Kushner is the only known member of that meeting who have access to top secret data.

His representatives said that while filling out paperwork Kushner was not informed about this meeting due to inattention, but his lawyer, Jamie Gorelik (Jamie Gorelick) — who no longer represents the interests of the Kushner — handed edition of Hill’s statement where she confirmed the involvement of Kouchner in the meeting.

“As we’ve said before, SF-86, Mr. Kouchner was filed prematurely, and in addition to other errors, it mentioned nothing about contacts with officials of foreign governments. The next day, Mr. Kouchner has submitted additional information, which stated that he had “numerous contacts with foreign officials”, which he will gladly tell you,” said Gorelik.

“Later, he reported all the necessary information, including that during the campaign and transition period, he conducted more than 100 telephone conversations and meetings with representatives of over 20 countries,” she added.

The former head of the electoral headquarters of the trump by Paul Manafort (Manafort Paul) also attended the meeting, and his name was mentioned in emails published by trump, Jr.

Manafort, who said about his involvement with Pro-Russian politicians in Ukraine, recently told about this meeting and about the role of the trump-youngest in its organization.

Veselnitskaya — this is the Russian lawyer with whom trump Jr. agreed to meet in trump tower. It is known that she is trying to seek the repeal of the Magnitsky Act — a us law introducing sanctions on Russians suspected of violating human rights.

In an interview with NBC News Veselnitskaya said that she had “never had any compromising or confidential information relating to Hillary Clinton,” and that she never had intentions of obtaining this information.

As reported by the publication the Hill, the DOJ, the former President Obama Veselnitskaya allowed to enter the United States without a visa because of “extraordinary circumstances”, and later she took part in lobbying campaign related to adoptions and the Magnitsky Act.

It was also reported that she had maintained contact with some of the Russian Prosecutor as part of its fight against the U.S. law on sanctions.

Akhmetshin — a former employee of Russian military intelligence, GRU. Now he is a U.S. citizen and a lobbyist directly related to the organization Veselnitskaya.

In an interview with the Associated Press, he confirmed that he was present at the meeting, but called reports of his links with Russian intelligence the “smear campaign” against him.

Goldstone is a British journalist who took on the role of facilitator in arranging a meeting between trump Jr. and Veselnitskaya.

Goldstone is the PR Manager of the Russian pop star Emin Agalarov, the son of Russian tycoon Aras Agalarov. Goldstone told CNN that Agalarov asked him to arrange that meeting. In his letters to Trump, Jr., Goldstone wrote that the “lawyer of the Russian government” to report incriminating information regarding Clinton to help Trump the election. He also wrote that he will remain with them until the end of the meeting and will appear only to introduce participants to each other.

As reported Akhmetshin, Anatoly Samochodow was at the meeting as a translator.

Samochodow’t told reporters whether he was present at the meeting, but added that he worked with Veselnitskaya on issues relating to the adoption of the Magnitsky Act.

An unknown representative of the Emin and Aras Agalarov

On Friday, July 14, CNN reported that the eighth participant in that meeting was a representative of the Russian pop star Emin Agalarov and his father.

Emin Agalarov is a businessman and a friend of trump. Trump — together with the participants of the beauty contest “Miss universe” — even appears in the clip of the pop star, filmed in 2013