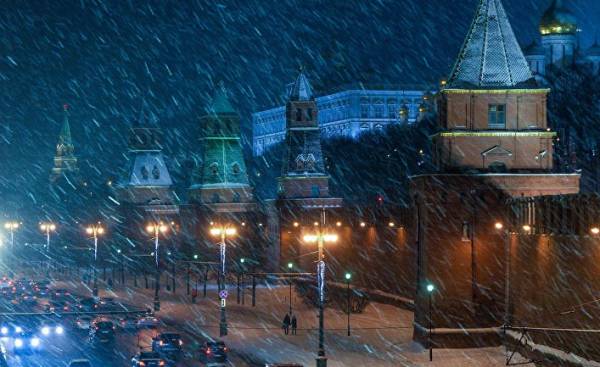 I finally fulfilled his great desire and had been in Russia at the end of February 2013. This is the best time to feel the atmosphere of a typical Russian winter, described in fairy tales and classics.

The first sight of Moscow, which I saw was the subway. Caught my eye for two things: incredible efficiency (almost every minute came the new composition) and the luxury of the station in the city centre. Some of them were discovered before the Second world war and was to demonstrate the power and strength of the Soviet Empire. These stations are considered a kind of underground art museums and their architectural beauty is not contested even in the West.

Metro is the only mode of transport in Moscow, which you certainly will reach in time. Once when I was a so-called tube (Moscow slang for a complicated motion, congestion), more than an hour taxi ride I barely broke four kilometers. Usually this is the standard distance between two metro stations, and underground transport overcomes him for two or three minutes.

At the end of the day the majority of European capitals is almost empty, but not Moscow. Even at 23 hours on Sunday, it may happen that you’ll barely squeezed into a crowded subway car. Many restaurants, cafes and supermarkets are open 24 hours a day. Near any metro station, you can easily find a shop or eatery, open all day.

Car owners in Moscow, too, can easily find service station, car wash and even a tire, which operate 24 hours. Metropolis that absorbs a nearby small city, a city that takes 20 million people, he sets a rhythm.

Portions in the Moscow restaurants, in contrast to Belgrade, you are unlikely to eat. Special attention should be paid to rates, because they are not very dependent on the location of the restaurant. You can find a decent restaurant near the red square and lunch for ten euros or to drink good beer about two euros, not far from the Bolshoi theatre. And on the periphery there are restaurants where prices are several times higher. For example, tea or coffee cost five euros, beer — six-seven, and a main course from € 20 and above.

Although the standard serving is not very large, the offer of Moscow restaurants are really huge. In Moscow it is possible to try far Eastern, Central Asian, Caucasian, Indian and European cuisine, dine in the English pub or in the restaurant, where they continue the Russian and Soviet tradition.

The waiters are often annoying. If you want to order coffee and read a newspaper in a typical Balkan style, be prepared that every ten minutes you will be asked: “do you want more coffee?” or “Try our desserts, they are delicious” — and still will recommend you to order a hookah.

In Moscow circulated a kind of cult movie. It seems to me that the popularity of the theater among Muscovites not to compare with any other city. Every day offers a repertoire of several dozen performances, and, most importantly, auditoriums are overcrowded. For example, since 2011, in the monumental building of the Theater of the Russian army is a play by nušić “Mrs. ministersha”. The main role is played Olga Bogdanova, people’s artist of Russia (the highest title which can only qualify for a skill worker).

“Mrs. ministersha” is the first play that I saw in Moscow. Overall, he delivered classically, so even our compatriots who do not speak Russian, it will be interesting to see this production. Actually, every time I subsequently visited Moscow, I even once went to the theater.

No less a cult than going to the theatre, for Muscovites is visiting museums. In Moscow — more than a hundred museums, and nearly every week you can visit the new, starting from the Museum with historical, artistic or scientific-technical issues and museums of famous writers up to the… Museum of the biscuit. Most of Moscow museums were created in Soviet times, but in the complex of VDNKH you can see the modern multimedia presentation on the history of Russia.

My first attempt to visit one of the Moscow museums were unsuccessful. Since my parents visited Moscow in the 70-ies with student tour and they were impressed with the Borodino panorama and Museum of the great Patriotic war (1941 — 1945), I also wanted to visit these attractions after a walk on red square. On the Internet I read that these museums do not work on the last Thursday of the month. However, despite the fact that it was Wednesday, I found myself in front of closed doors. The fact that it was February 28, that is, the last day of the month. So do not go to Moscow museums during the year when the last day of February falls on a Wednesday.

I had more luck with the visit to the Historical Museum which is located at the entrance to Red square. The Museum exposition demonstrates in 39 separate halls, each of which tells the story of a particular era in Russian history. You’ll need at least three or four hours to explore this Museum. More time will be needed for the inspection of the Kremlin, where it is impossible to ignore the exposition of the Armoury chamber and the Diamond Fund.

Despite the fact that in recent years, in Moscow really is a lot of building, the city plan does not ignore parks. In almost every urban area there are several small, by city standards, parks. In large Central city parks such as Kolomenskoye, Tsaritsyno Park and Izmailovo Park, laid miles of Hiking trails. And largest Park of culture named after Gorky, located on the banks of the Moscow river, the weekend is visited by hundreds of thousands of people. Thanks to parks and green planting of the air in this 20-million metropolis tolerable.

In Moscow and around many churches and monasteries. In Russia under the implied monastery complex enclosed by a wall, inside of which are several churches and temples. Moscow temples look really luxurious, and the walls often exceed ten meters. Almost in the heart of the town of Donskoy, Danilov and Novodevichiy convent. All these shrines built in the 16th century. Revered Shrine is and the Pokrovsky monastery. There are relics of St. Matrona of Moscow, who according to legend was advised by Stalin himself, to October 1941, he did not leave Moscow.

About a hundred kilometers from Moscow, in Sergiev Posad, lies the monastic complex dedicated to St. Sergius of Radonezh. It kept its power. Inside the Trinity-Sergius Lavra is located more than ten churches and temples. Lavra was founded in the 14th century, and since 1993 it is under UNESCO protection.

An example of real tolerance

Except the Orthodox, in recent years, in Moscow, a growing number of believers of other religions. One of the largest mosques in the world is located in the vicinity of the already mentioned Theatre of the Russian army. The total area of this mosque reaches 18900 square meters. In 2015, it was solemnly opened by the presidents Vladimir Putin and Recep Tayyip Erdogan. At the same place since 1904 was an old mosque.

In Moscow, unlike Western cities, there are poor neighborhoods, a kind of modern ghetto, designed for emigrants and their descendants. The respect for minorities and different faiths — one of the traditions of the local society, which remains unchanged since the days of the Empire. Russia — a common country for more than a hundred different nationalities, and Moscow and Russian society has accepted immigrants from the Caucasus, Central Asia, Siberia and the Russian Far East and provided them with equal opportunities with Russian.

Often on Moscow streets, in parks, in subways and shopping centers, you can see police and security personnel. Especially strictly check all three Moscow international airports. Police very helpful, and when checking your documents, and when I asked them about some street or object. I, as a foreigner, it certainly inspires confidence.

The harsh winter and snow — that is probably the first Association with Russia, which comes to mind is the residents of rest of the world. So that’s what I conclude my narrative. How many meters of snow during the night, nor fell in Moscow, in the morning, walking paths and main roads will be cleared. The effectiveness of local public services in the struggle with snow is impressive.

Here you have a concrete example. Your first visit to the Russian capital, I completed just in time for the 14th anniversary of the NATO aggression against the Federal Republic of Yugoslavia. It was Sunday March 24, 2013, and on streets of Moscow more than 12 thousand snowplows to clear huge amounts of snow that fell the night before.