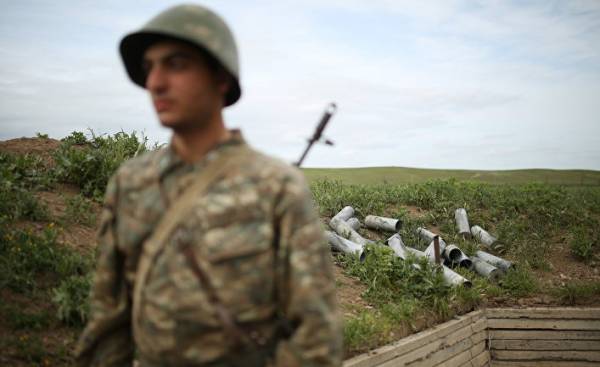 There is no reason for optimism, but in relation to the process observed caution. About this in an interview with Tert.am said the National Assembly Deputy, member of faction “of the Republican party of Armenia” NGO Chairman of “European integration” Karen Bekaryan, speaking on held in Brussels the meeting of foreign Ministers of Armenia and Azerbaijan Edward Nalbandian and Elmar Mammadyarov with the mediation of the co-chairs of the OSCE Minsk group.

Karen Bekaryan pointed out several elements of the process and noted that, at the meeting of course was said about the fact that the situation on the borders of the NKR-Azerbaijan and Armenia — Azerbaijan should allow to further the negotiation process.

“First and foremost, the task is to reduce tension, which is directly connected with Vienna and St. Petersburg agreements. That is, the Armenian side must trust the other party to the negotiations, it means that there must be arrangements and hence I think is more than logical that the question again passes the red line on the agenda of the meeting,” he said.

According to the Deputy, in addition, the co-chairs have already taken steps to clarify with the foreign Ministers of the details and preparation of the meeting of the presidents.

“So, again, as always, we see the same formula, according to which any negotiations, even the most difficult, is preferable to war. It is better to organize a meeting that will be meaningful and based on the implementation of past agreements. In this case, to be hope for the promotion of the process, there is basis for optimism. At the moment the responses of the parties are very cautious, but in the context of the Vienna meetings in the framework of the informal meeting of foreign Ministers of the OSCE, I attach particular importance to the meeting with the foreign Minister of Russia, because again, reference was made to the implementation of the agreements, as well as, of course, to the speech of the foreign Minister of Armenia, during which was sounded very clear formula that is acceptable to colleagues,” he said.

The expert reminded that the basis of the speech of Edward Nalbandian lay the idea that if there is an agreement on the implementation of mechanisms to investigate incidents on the borders, and which will show which of the parties violated the truce, naturally, refuses to fulfill the agreement that is in violation of side.

“This is not said for the first time, but in the speech of the Minister of foreign Affairs of Armenia once again emphasis was placed on it, that is responsible for border tension, including human sacrifices, lies on the side that refuses to agreements, and it is understood for international colleagues,” he said.

The MP continued that at the same time, it becomes apparent sequence of events related to the shelling of Azerbaijani villages on the fourth of July and a lot of noise and hysteria raised by Azerbaijan because of the civilian casualties.

“Policy of fomenting anti-Armenian sentiment and the receipt of dividends seems to be no results. In the speech of the Minister of foreign Affairs of Armenia was also highlighted that it is impossible to tolerate and not to defend himself, knowing that Azerbaijan is using civilians as a shield and uses his arms on the backs of their citizens,” he said.

To the question whether he considers that the process has reached an important and dangerous turn and the co-chairs and the mediators are aware of this, try to multiply the efforts to achieve the implementation of the agreements, Karen Bekaryan said that this threat is not new, and added that today there is awareness of this.

“The escalation shows that dangerous moment has not been overcome and we should not weaken our vigilance and the co-chairs, in turn, understand that the situation is in any case not fully predictable. Now it is wrong to say that intermediaries are not doing another question — how effective are these efforts and how they justify themselves in the face of such behavior of Azerbaijan that is the problem. We talked many times about the need for targeted applications, but this should not be an end in itself, you need to understand what should be next steps, what tools have co-chairs for the removal of the situation the plane, allowing to achieve full predictability of the parties. So there is a big problem of the revision of the approach, because experience tells us — Azerbaijan for more than abuses this soft tool set of intermediaries,” – he said.

The question is, can we expect that after this meeting, the ceasefire violations will cease, announced by the Minister of foreign Affairs of Armenia Karen Bekaryan said: “I Have no great hope, because one thing the statements of understanding, and another thing — implementing them, especially in the case of Azerbaijan. That is, experience shows that even the agreement are not met. On the other hand, there is a negative tradition that such meetings, regional visits of the OSCE accompanied by the Azerbaijani provocations on the border, and from this point of view, there are grounds for optimism and we should keep that in mind.”