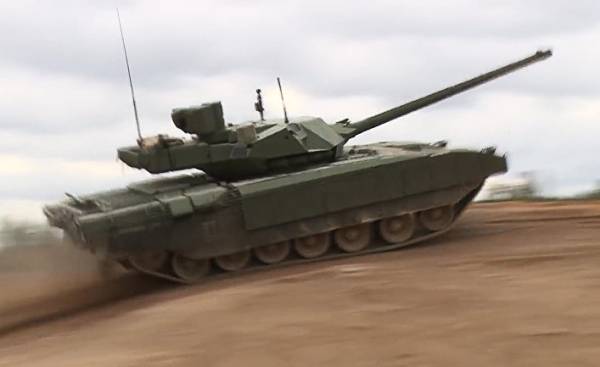 The production of tanks in the US fell to its lowest level in decades. The only country left in the tank plant in Lima, Ohio that produces a total of 12 tanks “Abrams” in the year. Meanwhile, Russia intends to equip its European group of troops with hundreds of tanks of the new generation, which are much more hardy than the technique of American soldiers.

Thus, in the United States army the real crisis comes in the field of heavy armored vehicles, as they are lagging behind Russia after long years of the global war on terror that had distracted their attention. Congress is taking steps to increase on the tanks, but the plan of modernization, which the administration trump inherited from Obama, is that to bring tanks in the armored brigades to more or less the current level, it will take almost a quarter of a century.

With the pace we can play even long before our troops will appear upgraded tanks. Actually the fact that America and its NATO allies are not looking to replace their outdated tanks, akin to the invitation to aggression. Russia already has numerical superiority in armored vehicles in the region. Among U.S. allies, such as Germany, France and Italy, in the army — less than 300 tanks. Russia has thousands of them. Moscow also has the tactical advantage of surprise in case of a tank throw in a westerly direction.

But now Russia is beginning to adopt much more sophisticated tanks than the older machines of the US army and their allies. New tank “Armata” possesses a dynamic of anti shaped-charge armor protection, active protection that ensures interception of the incoming anti-tank missiles, as well as a radar for intelligence purposes of all types. The land forces command, the United States recognizes that Russia has already achieved parity with Western tank forces, but as an early adopter of the “Armata”, it will break forth.

It is no exaggeration to the statement that the inequality of the combat capabilities can lead US to defeat in a future war between East and West. Naturally, this does not Bode well for regional deterrence. Unfortunately, it’s too late to start a program to develop a new tank to restore the superiority of the US army in ground combat. Its implementation will take decades. Under these conditions, the U.S. army must significantly accelerate production of the latest version of the tank “Abrams”, and then proceed to enhance its capability, when there will be appropriate conditions.

Head manufacturer of the tank “Abrams” — General Dynamics — suggested a plan to upgrade all tanks from the composition of the heavy brigades of the US army in a five-year term with a reduction in the cost of each new machine, thus complying with the wish of the President of the trump. Specifically, the plan provides for producing 22 tanks per month, not five, as proposed by the Obama administration that will lead to a decrease in cost per unit by at least 15%. The company States that it will be able to start the accelerated production in year and a half after signing a multi-year contract.

In the process, will create thousands of new jobs in the manufacturing sector, mostly in Midwestern States such as Indiana, Michigan, Ohio and Wisconsin, as well as in Florida and Pennsylvania. There is concentrated industrial base and supply chain for American armored vehicles, or at least what is left of it. But the main challenge in this case is not the creation of jobs and the production of heavy armored vehicles, which will allow American servicemen in Europe and other places to deter aggression or to destroy the advancing enemy.

Under a multi-year contract for the production of the newest versions of the “Abrams” will be possible annually to equip their three armored brigades. This will help to renew the fleet of heavy brigades in the US army for almost 20 years faster than Obama’s plan. It really says a lot about how much the previous administration underestimated looming over Europe the threat. Suffice it to say that just a few years ago the Pentagon seriously proposed to close the last tank plant in the country.

The invasion of Moscow in Ukraine has awakened the politicians, showing the extent of the danger, but the army’s modernization plans have not changed significantly due to the lack of funds. Since then, as became clear, the Russian intentions, defence spending each year is limited by law, and the land forces by necessity had to spend money on salaries to staff and for ensuring the combat readiness and modernization of the hands simply do not reach. Therefore, tank troops barely survived, receiving beggarly money to meet their needs in technology.

They just don’t have enough money to buy all the necessary you need for deterrence in Europe. The army needs more money to modernize. And it is difficult to imagine a more serious priority than the provision for tanks that can contain the attack rapidly modernizing Russian army. Since Moscow has many advantages in its theatre of war, the failure to equip American soldiers with the latest military equipment samples can become fatal step.

The good news is that the plan of the General Dynamics can be implemented by allocating much more funds beyond what is planned to spend on tanks the Obama administration. Congress and the White house will be easy to collect money for this purpose, and they will make a huge difference, meaning the difference between victory and defeat in a future war. Politicians just need to think about what it will mean for America, the defeat in the ground war in Europe. That would be really expensive.

Lauren Thompson, Director of the Institute of Lexington, used to teach nuclear strategy at Georgetown University.