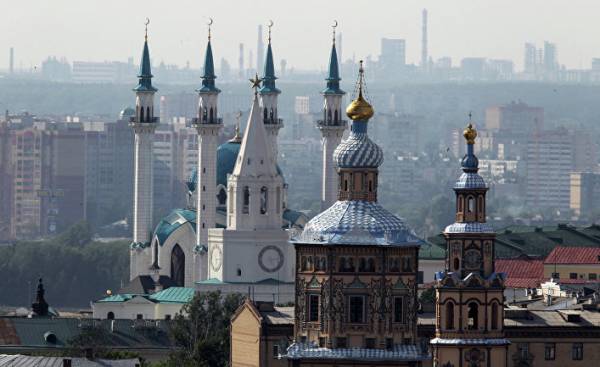 Skepticism against Islam is great not only because of Islamist terror. Both Christianity and Judaism regarded as a religion, facing the past. Where does this fear of faith?

There is hardly anything more enjoyable than a simple answer to a complicated question. What is good? What is bad? Who is to blame? In fairy tales, all executed simply because there is witchcraft and it is popular with the children. And the totalitarian system, too, simply divide the world into friends and enemies, which makes them a powerful attractive force for inertia of thinking of the masses.

But too General judgments is not compatible with our enlightened thinking. And absolutely they are not compatible with the modern requirement to consider events not in one dimension, but always from different points of view. We check that we are weighing. We believe it is wrong to hastily judge people or turn them into outcasts because of their unusual lifestyle.

But there is one area that seems less worthy of our tolerance is a religion.

With the increasing threat of terrorist attacks Islam has become a factor of fear. The atrocities of the so-called “Islamic state” (banned in Russia), reports of the horrors of the crimes of the jihadists show to what extremes religious fanaticism can bring people.

Do not submit hand woman?

But casual meetings with Muslim notions of values — from a Western point of view inherited from the past cause skepticism. The Imam, who does not want to shake hands the teacher his son, report on a Muslim school in Sweden where students come on a bus where girls are allowed to sit only in the back… All this increasingly undermines respect for Islam. But not just him.

Fear of faith before this faith motivated insanity, before returning to the old structures that don’t want to know about equality, has already led to the fact that religion excites suspicion. After the bloody terrorist attacks of criminals, who spoke of his connection with al-Qaeda on the French satirical magazine “Charlie Hebdo”, Berlin magazine “Zitty” titled his article “God is stupid”.

When a few weeks ago it became known that some Muslim parents in Berlin protested against the caregiver of their children in the nursery, because he was a homosexual, the social network again reacted reflexively by the desire to eliminate all religion.

However, it is fundamentally wrong, because Islam is judged only by the atrocities of the fanatics and obsolete views of the conservative representatives. The result is millions of Muslims refuse to decency. It is therefore unfair to declare religion the cause of all evil.

General judgments about the faith, trying to make it funny or to deprive her of any sense fatal. They hide the contempt in a totalitarian system where religion is called the opium of the people and claim that Christianity is incompatible with “German nature”. This is a slander on the force without which the world would be a sad wasteland.

But brain researchers and society prove in numerous works that faith is healthy. People with a spiritual attitude not only low blood pressure: they are easier to tolerate disease and depression. Moreover, faith helps not only to those who believe in a higher power, but also those who may not believe in them and yet are drawn to them.

These are the people who are atheists, but, nevertheless, believe in the values that are above what they see and what can touch higher than the needs of their ego. These values — the belief in friendship, the beauty of nature and its wonderful effect, in justice and the power of love.

In addition, there are some people who truly believe in God and feel that this faith gives them strength. A lot of them. Too much to be able to talk about them. Despite education and “the fact that the world has ceased to be magical”, despite the secularization and cases when believers leave the Church, however, in Germany 46 million women and men belonging to one of the two large Christian denominations. But the party in which many members, pick up, despite the “effect of Schultz” (Martin Schulz, head of the social Democrats of Germany — approx. TRANS.), almost half a million registered associates.

The same as party policy, active Christians are pillars of society, each in his place. They not only carry the Church letter, making coffee for lunch for the elderly in homes parishes, knit for the Christmas markets, visiting the sick and teach refugees in the German language.

Christians involved in political debates and advocate for human rights and the protection of nature. Some risk their lives going into disaster areas to perform the Christian duty to help the victims of earthquakes or wars.

Religion is not only the basis for creative work and the origin of each culture. Religion is also the keynote of life in which a person constantly perfects himself, questioned his behavior. It focuses on what you say Bible texts with their thousands of years of wisdom about the needs and aspirations of man, in which he focuses on the answers he gives faith.

The one who is closely acquainted with the gospel knows that the stories about Jesus to bring freedom and new trends that are superior to Islam. This is not least concerning a woman’s role.

What Jesus spoke against those who wanted to stone the woman that broke the marriage bond, and asked the angry people about their sin, is only an episode, which confirms the enlightenment of Christianity.

And when even today, a Muslim is not supposed to reach out to the woman, Jesus is already more than 2 thousand years ago had no problem with letting known in the city for the sinner to smear the world with his feet.

The Christian Church, nevertheless, for thousands of years oppressed their women. And in the Catholic Church they are still not allowed to be ordained priest. That the Church, in spite of this, put forward the theme of equality, due to the fact that they are in favour of debate and theological arguments and fewer can afford to give simple answers to complex questions.

Those who believe the Church is backward and not giving accurate answers, ignoring the countless debates about the role of contemporary faith in society, faith, which can make a person happy.

Indiscriminate condemnation of Islam is also counter-productive. It sharpens the contradictions and prevent the reforms that this religion, too, must hold, as did the Christian Church. And we can hope that she will do it.