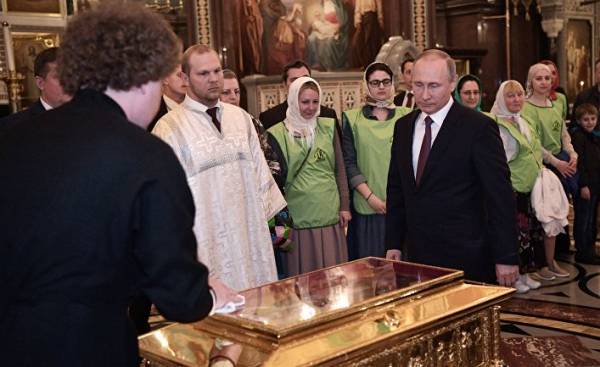 The path was long and hard. Ilona, a young investigator from the Voronezh region in southern Russia, arrived by bus to Moscow. At six o’clock in the morning she stood in line on the Bank of the Moscow river. Subsequent hours she spent waiting in front of the Cathedral of Christ the Savior. The reason for all these efforts? One edge of St. Nicholas. Within two months it will be exhibited in Moscow and St. Petersburg. Only around noon, Ilona managed to get into the largest Orthodox Church in Russia.

This Cathedral was built in XIX century in honor of the victory over Napoleon. Stalin ordered to blow it up — religion in the Soviet Union was not completely prohibited, however, derided. In the 90-ies it was restored at the old place. In modern Russia, he again personifies the proximity of the state and the Orthodox Church. It was hardly unexpected when the punk group Pussy Riot chose in 2012, this temple as the setting for their protest songs.

Five years later, in may of this year, a sworn enemy of this group of activists the head of the Kremlin Vladimir Putin visited the Cathedral to venerate the relics of St. Nicholas. The head of state willingly appears in churches. Putin knows that after the collapse of the Soviet Union, religion in Russia is experiencing a Renaissance. According to the polling Institute Pew Research conducted this year, 71% of Russians called themselves Orthodox, and in 1991 there were only 37%. The religion became an important part of their national identity. The government uses the proximity to the Church, to consolidate his power.

The Cathedral of Christ the Saviour in this case plays a particularly important role. He’s gorgeous, inside decorated with icons. The choir performs songs of the Church, the believers are holding images of the saints and pray. There 21 may have come more than 1.5 million people to see the edge of St. Nicholas. A piece of the relics were brought to Russia from the Italian city of Bari.

The line moves to the same table. Behind armored glass is an icon of Nicholas the Wonderworker, his chest piece relics. The pilgrims only a few seconds in order to touch his forehead to the glass and kiss him. Then volunteers take them by the shoulder and gently but firmly push. One priest constantly rubs the glass.

St. Nicholas, who in the fourth century was Bishop of Myra, known in the West primarily as a Santa Claus. In Russia the icon with the image of this serious man with a long beard can be seen in many homes. From a historical point of view, Nicholas is Russia’s most revered saints. And indeed he has something in common with Santa Claus — many Russians believe that he can accomplish suggested to him the wishes.

Ilona, an investigator from the Voronezh region, asked the Saint to find her a good husband, as well as the health of your family. But for her in this pilgrimage we are talking not only about the personal. It is important also a sense of belonging. “I feel now is something majestic and proud of my faith,” she says, leaving the Cathedral.

As well as Ilona is a Russian feel. According to a survey by the Pew Research Institute, people not only in Russia but also in other countries with majority Orthodox Christians, tend to proud of their national identity and culture.

And although the Church and state in Russia, formally independent from each other, in fact they exist in symbiosis. The Church plays an increasingly important role in discussions about family and morality. Together with close to her the conservative groups it requires, for example, to abortion, at least not covered with health insurance. The Church is for teaching religion and against sex education in schools. According to one public opinion poll conducted by the Levada center, for it expressed 56% of Russians. Ilona also says: “Well, when the Church participates in all spheres of life.”

The Kremlin uses this conservative Outlook for their own purposes. Russia should be the antithesis of the “decadent West”, a country that holds “true” Christian values. Contacts from conservative Christian churches and groups in the West thus help to strengthen this position. Last year, first met in Cuba, Moscow Patriarch Kirill and Pope Francis. At this meeting it was also decided about the journey of the relics of St. Nicholas.

“This is the right step in bilateral relations,” — said the representative of the Patriarch, the father of Alexander Volkov. “They should be based on what really unites us”. Symbolic power is, according to him, that Nicholas is a Saint who lived before the great schism and is equally revered by both Catholics and the Orthodox Christians.

In Moscow, people had to stand up to ten hours to see these relics. These days the Cathedral is closed until after midnight. No pilgrim should not sleep on the street. The waiting time people brightens prayer. “In this life I trust God and my family,” says Svetlana, a pilgrim from Samara. She wants to ask Nicholas’s health. She’s hoping for more of the Holy than medicine.