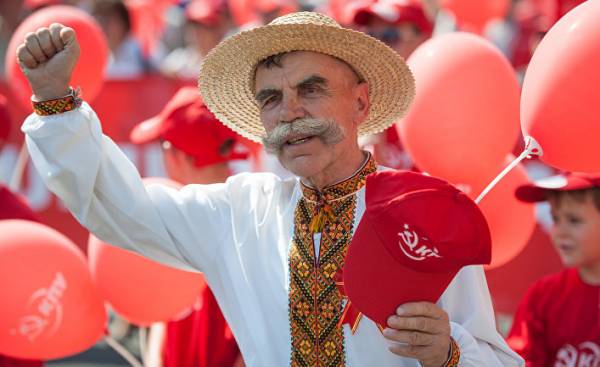 In 2014 these two neighbouring countries are engaged in a bloody, though undeclared war, as soon as reasonably practicable berating and accusing each other of all mortal sins. They call each other terrorists and Nazis. So the sudden blossoming of their mutual trade is, of course, a strange feeling.

But the conflict between Russia and Ukraine is full of paradoxes.

Recall, for example, that Russians can freely enter Ukraine without a visa and Vice versa — even though the Ukraine in January 2015 was officially described Russia as a “state-aggressor”. Russia remains the largest foreign investor in Ukraine with its 38% of all foreign direct investment the results for 2016.

The status of the Russian language in Ukraine — a favorite pretext for Moscow’s support of separatists in Eastern neighbouring countries — judging by the polls, has a very small value for both ethnic Ukrainians and ethnic Russians in Ukraine.

As the figures show, the Ukrainian Bureau of statistics, in the first four months compared to the same period of last year import of Ukraine from Russia increased by 46%. At the same time, Ukraine’s exports to Russia grew by 39%. Three years later, after it was captured and annexed the Crimean Peninsula and began covert support for the separatists in the Donbass region with the help of soldiers and weapons, Russia remains the largest trading partner of Ukraine.

But what about the war?

These figures are a cause for irritation and concern among nationalist Ukrainians, who are now very much.

“Of course, the fact that Ukraine does not use its entire Arsenal to wage an economic war against Russia is a problem,” says Anatoliy Pinchuk, head of the analytical center “Ukrainian strategy” in Kiev.

Pinchuk claims that Ukraine could lead to “economic war,” so that it hurt Russia, while not touching upon Ukraine itself. But the Ukrainian leadership seems to be mild interest, including from the uncontrolled corruption in the country.

Ukrainian movement “Vidic” (“Otpor”), which is the end 2013 trying to encourage citizens to boycott Russian goods, is also accuses the government led by Petro Poroshenko that they act too cautiously and systematically.

“Our entire economy operates as if no war was not” — says one of the activists of “Otpor”, Katerina Chepura, the English-language Ukrainian newspaper Kyiv Post.

This statement, however, can be questioned. Counting in dollars, from 2013 to 2016, the gross domestic product of Ukraine decreased by almost half. In the same period trade between Ukraine and Russia fell to below a quarter of previous numbers from 38.3 billion in 2013 to 8.7 billion. In this connection the growth in the first four months of 2017, is less impressive.

The fall contributed to the fact that the Kiev government no longer controls Crimea and most of Donbas, but this does not explain the volume drop. The icy relations between Moscow and Kiev was established after the revolution on the Maidan in February 2014, the escape of President Viktor Yanukovych and the military operations of Russia in the Crimea and the Donbass.

Observers in Ukraine and beyond the call of total boycott of Russia’s economic suicide for the country. According to estimates, the trade war between the countries will inevitably cause more harm to Ukraine than Russia, because Ukraine is much smaller, but geographically and geopolitically it is sandwiched between Russia and the West.

But, given the mood in the country for the government from a political point of view is now much more sensitive to the strengthening, not the weakening of trade and other ties with Russia.

“To date, there is no doubt that the growing trade with Russia in Ukraine is seen as something bad,” says Balas Arabic (Balazs Jarabik), a Slovak expert on Ukraine from American analytical center “Carnegie endowment for international peace.”

“The problem is that the economic war against Russia will damage Ukraine. I understand the Patriotic sentiment, but the real problem of Ukraine is poverty, and the country needs much higher economic growth than now to improve the extremely poor socio-economic situation,” he said by phone from Kiev.

In addition to trade performance, there is little that indicates that relations between the two countries will improve.

Despite a number of cease-fire, clashes between the Moscow-backed separatists and Kiev government forces in the Donbass continue. Not a day passes that the corps of observers of the OSCE reported numerous shots of the weapons, which, according to the Minsk agreements, long had to be withdrawn from the front line. Hardly a day passes without new casualties — most often military, but also civilians. Nothing indicates that any of the parties, determined to implement the political components of the Minsk agreements, such as the transfer of control over border with Russia to Kiev or strengthening of self-government is now in the separatist-controlled regions.

The economic blockade of Donbass, which began the Ukrainian nationalists in the spring was the policy of the Ukrainian government. Direct flights between Ukraine and Russia was suspended from the autumn of 2015. Blockade of Ukrainian activists recently forced the major Russian Bank Sberbank to leave the country.

Recently, Ukraine has banned several Russian Internet sites, including Vkontakte, the most popular social network in Russia and Ukraine. A Russian court last month sentenced the head of the Ukrainian library in Moscow to four years of imprisonment (conditionally — approx. ed.) for the dissemination of banned literature.

This week during the summit of “twenty” in Hamburg it was possible to see posters with images close-up of Ukrainian soldiers, volunteers, doctors and other and the caption: “the Ukrainian army protects the borders of civilization.” Russian media and the Russian Embassy in London has angered another poster where the Russian language is described as a “linguistic disease”. Erroneously States that the poster now adorns the streets of Kiev, though in fact it in 2015 among a great many others participated in the poster competition.

From friend to enemy

Almost any topic can lead to verbal sparring — finals of the Eurovision song contest in Kiev, and black-and-orange St. George ribbons to the Russian writer Mikhail Lermontov and French medieval Princess Anne of Kiev.

“Relations between the two countries, rather hostile. From diplomatic relations, little remains. The Russian Embassy in Kiev does not work and will only perform basic functions. And other communication by and large limited to contacts between the two presidents, and they are rarely bilateral, and often occur during multilateral meetings, for example, in the Normandy format,” says Arabic, referring to the diplomatic group comprising Russia, Ukraine, France and Germany.

According to the survey conducted by the Ukrainian research institution of “Rating” in may of this year, 57% of Ukrainians belong to Russia “too cold” or “very cold”, while 17% refer to it as “heat” or “very warm”.

“For most Ukrainians, Russia turned from a friend into an enemy. So Putin won the Crimea (hopefully temporarily), but lost to Ukraine (hopefully forever)”, — said Iryna Bekeshkina, one of the leading sociologists of Ukraine and the Director of Fund “Democratic initiatives”, in a recent report.

“From the Ukrainian side there is no desire to improve relations with Russia. And understandably so, as the Ukrainians see Russia as an active participant of the conflict in Donbas. Besides, the Ukrainians are hardly ready to forget the Crimea, so it is difficult to suggest how to improve the relationship. It is desirable, not least for the West — to try to stabilize the situation, that the situation has not become worse” — the expert believes Ukraine Balas Arabic. 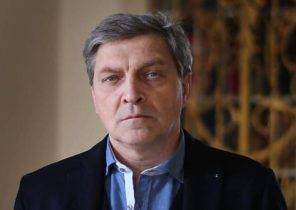