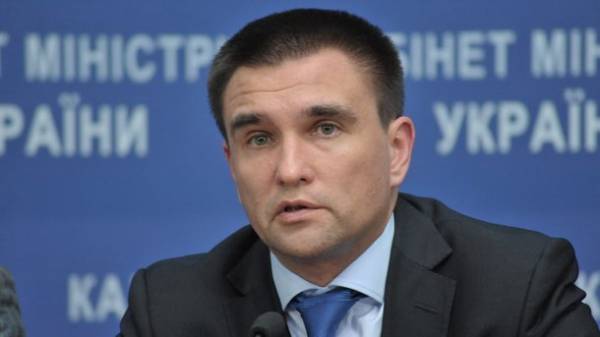 The Minister of foreign Affairs of Ukraine Pavlo Klimkin said that the NSDC decision on the introduction of biometric control for entering the country foreign nationals will not have any practical consequences either for EU citizens or for citizens of other countries with similar biometric documents.

“We understand that in the context of a visa-free regime that works for biometric passports, we have to identify problems, not only with the European Union, but also with other countries who have biometric passports according to ICAO standards (International civil aviation organization – ed.). Thus, for the EU, this decision effectively would have little practical consequences,” Klimkin said at a briefing with Portuguese counterpart Augusto Santos Silva (Augusto Santos Silva) on Monday in Kyiv, answering the question about the possible impact of the decision of the NSDC of Ukraine to enter entry to foreign nationals for biometric passports to the regime of mutual trips between Ukraine and other countries, including the EU.

The Minister also noted that as soon as Ukraine is technically will prepare a registry of biometric data, it is the decision of the Council will be implemented. He stressed that “this is only the first element”.

Klimkin noted that he had presented at the last earlier on Monday in Kiev the meeting of the Council a set of solutions that are integrated with a control system for check-in/check-out, also the movement within the country of citizens of the Russian Federation.

“So I consistently and it’s approved, the next stages will also control, but it will be clearly aimed at the threat that we have, namely the Russian Federation”, – said the head of the foreign Ministry of Ukraine.

According to him, it is planned to implement a procedure pre-warning on travel and movement control inside Ukraine such citizen.

Klimkin stressed that Ukraine needs a comprehensive response to the terrorist threat that Russia is creating in Ukraine.

Responding to a question about whether it might be in the future introduced a visa regime with Russia, the Minister said that just the introduction of visas for citizens of Russia do not allow to implement those purposes which are put before itself the Ukrainian state.

“First, we will not be able to effectively control the date of entry – how to enter Russian citizens, how it will happen. And when they enter, the portion of biometric data is open and part is closed, and we some of these data are not going to get,” he explained.

In addition, Klimkin convinced that Russia will introduce retaliatory measures. “They will do a provocation and enters the same visa regime, trying to put pressure on our citizens who live, for example, on the territory of the occupied Crimea”, – he said.

As reported, on 10 July, the Secretary of national security Council and defense Oleksandr Turchynov on the results of the meeting were informed that for Russian citizens residing on the territory of Ukraine, introduced a mandatory registration at the place of residence and the need to supply information regarding travel within the country.

He also said that the national security Council of Ukraine has adopted decision on introduction of biometric control for entering Ukraine, citizens of foreign States and introduce an electronic system of pre-registration for intending to enter Ukraine for citizens of the Russian Federation by 1 January 2018.