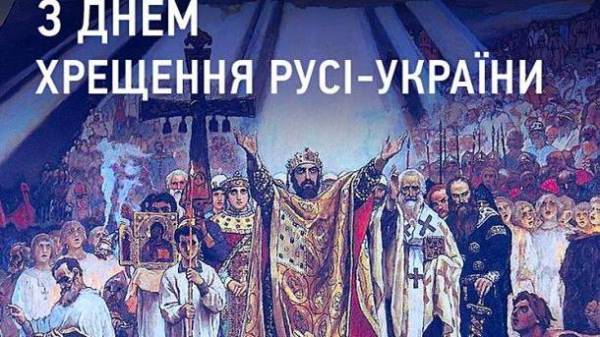 The President of Ukraine Petro Poroshenko congratulated Ukrainians on the Day of the baptism of Rus. This is stated in the message on his page in Facebook.

The President hopes that the recognition of the autocephaly of the Ukrainian Church equal to other Orthodox churches.

“Volodymyr the Great 1029 years ago, made the fateful decision to christen Rus-Ukraine. He accepted the Christian faith from the Church of Constantinople, which for us today is mother Church. It we expected the recognition of the autocephaly of the Ukrainian Church equal to other local Orthodox churches. And, of course, spiritually and administratively independent of Moscow, from the aggressor country”, – said the President.

He stressed that the choice of the Christian faith by Prince Volodymyr was the European choice.

In turn the Prime Minister-the Minister Vladimir Groysman said that thanks to the baptism of the Ukrainian European choice was made before many European countries.

“Baptism of Kievan Rus became an epoch-making event that determined the future development of the Ukrainian state and its place among European Nations led to the further civilizational and cultural history in our country. Together with the baptism of the Kievan princes was approved state, which has become one of the most successful in Europe at that time. With the adoption of Christianity by Prince Volodymyr the Great thousands of years ahead ensured the entry of Kiev to the European civilization, created the conditions for the formation of a unique socio-cultural space, which has been and remains an inalienable part of Europe. For centuries the Ukrainian lands evolved in line with the European Christian culture, and the arrival of Oriental despotism and her long dominance didn’t change. Through the baptism, the Ukrainian European choice was made when many European countries started to build their own statehood,” – said the Prime Minister.

Recall yesterday in Kiev in honor of the Day of the baptism of Russia held a procession, which ended with a solemn prayer service on Vladimir hill. He gathered thousands of believers.