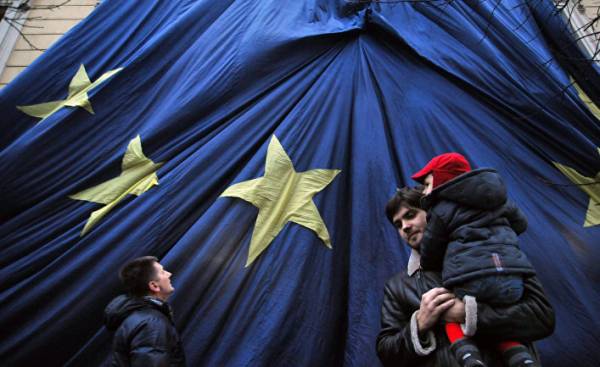 Two Jewish institutions have become a victim of anti-Semitic attacks in Lviv in Western Ukraine. As it became known this week, June 30, unidentified persons threw a firebomb into a synagogue. On the same day was attacked and the building of the Jewish community on the street Sholem Aleichem: the hooligans struck at the paint cans anti-Semitic slogans like “Away Jewish power.” People were not injured.

This was announced by the Lviv city Council on its website, citing Director of the Ukrainian Jewish Fund “Hesed-Arieh” Adel Dianov. The Council condemned this act of vandalism and demanded to bring the perpetrators to justice. “Lviv was, is and always will be a place of tolerance” — are on the website the words of the representative of the city of Andriy Moskalenko.

June 30 in Lviv, recalled the entry of German troops, followed by anti-Semitic pogroms. Until July 2, according to various estimates, were killed from 4 thousand to 7 thousand Jews.

On the same day, June 30 in Lviv the festival began with a “Shukhevych.Fest”, which lasted until 2 July. This festival, held with the support of Ministry of culture of Lviv dedicated to the memory of nationalist leader Roman Shukhevych, who during the Second world war was the commander of the Ukrainian insurgent army (UPA) (banned organization in Russia — approx. ed.) and, as commander of the battalion “Nachtigall”, wore uniforms of the German Wehrmacht. Jewish organizations criticized the “Shukhevych.Fest”.

Eduard Dolinsky, Director of the Ukrainian Jewish Committee, sees a direct correlation between the attacks on June 30 and “Shukhevych.Fest”. “They are a logical consequence of the shameful of the festival in honor of Nazi collaborator Roman Shukhevych”.

As noted Dolinsky, world Jewish Congress and the Jewish organizations in Ukraine, asked the city government to cancel the “Shukhevych.Fest”, but to no avail. “We are concerned about the continued glorification of the persons who participated in war crimes, ethnic cleansing and the Holocaust,” says Dolinsky.

As the American organisation National Coalition Supporting Eurasian Jewry, “Shukhevych.Fest” offends all those whose perished in the Holocaust. The world Jewish Congress also urged the city government to cancel the festival. As noted by the world Jewish Congress on the page, June 30, 1941 Ukrainian troops, among whom were troops Shukhevych, under the command of the German army killed more than 4 thousand Jews.

“It is regrettable that the lions celebrates the anti-Semite killer event, which takes place on the anniversary of the terrible massacre of thousands of Jews,” says Robert singer, Vice-President of the world Jewish Congress.

Earlier, the Minister of foreign Affairs of Poland Witold Waszczykowski (Witold Waszczykowski) has threatened Ukraine to block its plans to join the EU, if Kiev does not take a clear position regarding the historical events and issues of the minority. Especially the phrase Waszczykowski “Bandera you are in Europe,” has called on Ukraine’s discontent.

At the end of February, the Ambassador of Poland in Ukraine Jan Peklo (Peklo Jan) talked about the fact that the glorification of the leader of nationalists 40 years of Stepan Bandera will not affect relations between Ukraine and Poland.

Less diplomatically expressed Yuriy Shukhevych, a Deputy and son of nationalist leader Roman Shukhevych, in connection with the statements of the Polish Minister of foreign Affairs. For such words against Bandera and it would give Poland a slap in the face — these words of a Ukrainian politician from the Radical party leading Internet portal strana.ua.