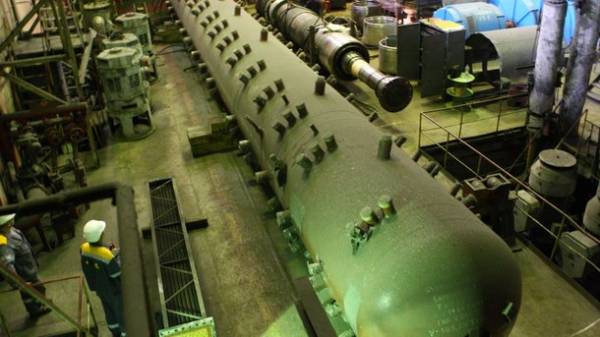 Being close to Burshtyn thermal power plant, it is difficult to imagine what awaits you inside. Appearance — a typical rectangular building, piercing the sky pipe, a high fence — not good enough transmits all the power contained inside, where twelve pulse units turn micron coal dust in the blazing sun, warming extremely purified water in a pressurised superheated to 550 degree steam. Steam, which causes the turbine rotors to spin with furious speed to the generator then turned torque into a flow of electrons, giving life to all modern civilization.

The correspondent of “Today,” visited the center of Burshtyn energy island, and learned how the Japanese lean production system and vast experience allow for a unique scale reconstruction and repair work. 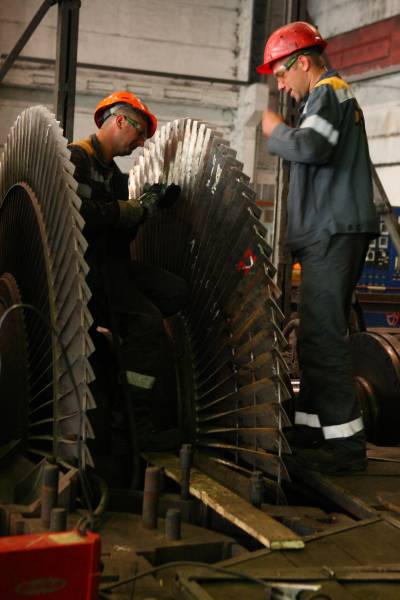 On the turbine. Delicate work that requires skill

The turbine of the first unit in the overhaul, work boils. The man in the blue helmet, knocking his hand on the head — and a huge crane hook starts to go down from under the ceiling. This is reminiscent of the magical passes — he makes a strange motion with his hands, and lifting mechanism fulfills all requests. Three times to notice the crane operator is in the cab at the other end of the enormous turbine hall. The view from there is probably stunning: twelve turbines, packaged in a blue and yellow casings, arranged in an orderly row and bathed in muted sunlight coming through the window.

— Last time the first unit was repaired in 2010, since then he has worked 6.5 years. Each such time interval is the repair — warning to identify defects and to resume full functionality of the unit, — says Yaroslav Grenier, Director of “Galremenergo” interior contractor DTEK “Zapadenergo” on repair works.

The unit consists of three main parts. This boiler, turbine and generator. The main work on the boiler — extended service drum (one of the busiest nodes, where, in fact, steam is taken from the water and moves further in the direction of the turbine) and replacement of heating surfaces. All cleared, repairmen carefully inspect every item for defects, eliminate them and make a decision as to whether the boiler to work on. The turbine and generator are completely disassembled, and also change all the worn parts — for example, the blades of the rotor.

The overhaul is, in essence, the work is banal, although with the old equipment it often turns into a creative. In fact, we restore the initial settings of the unit, then it works like new, and even better — the capacity may be increased by 10 megawatts — says Yaroslav and then gives the example of General electric, which is building a unit at 870 megawatts, declared that this power, although potentially it could of 910 MW. Often we have to restore everything, and if the irreparable things that has led to the degradation of equipment all replaced with new.

Repairs not only will prolong the term of operation of the equipment and improve the technical characteristics, but, most importantly, will reduce emissions of harmful substances into the atmosphere: for this purpose, the electrostatic unit will change a significant number of members receiving electrodes and repair the system off, which will increase the degree of purification of smoke gases. 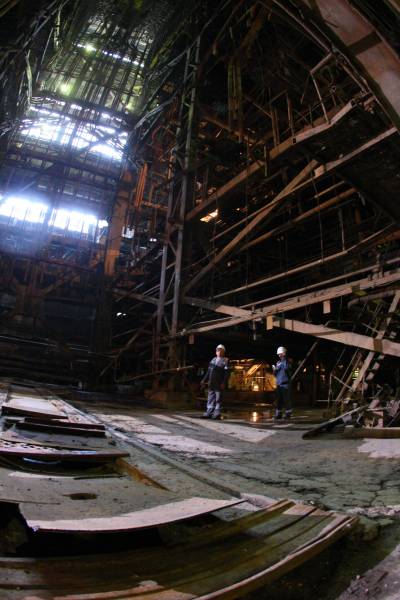 There was a boiler. As a 40-foot backdrop for the film “Alien”

However, the main action takes place not here but for 10-m unit, where the reconstruction, pursuing several objectives: first, capacity will increase from 195 to 210 MW; in-the second, will significantly improve the environmental performance. To reach it, have to go through a real maze, which is unaccustomed to dizzy. Although externally, the architecture of the station seems easy to get lost here is easy: the stairs go into the secret passages, those to derive closed safety working platforms. Rumble of the mill grinding the coal; the roar of the turbine; that with one, on the other hand breaks out the welding, cast shadows, iridescent rainbows. The place where once stood a 40-meter cauldron, now empty, somewhere up the ominously shining green lamp what resembles a space ship in the best traditions of gierowski decorations for the “Stranger”. I momentarily regret not making a movie: on the TPP, you can work in a variety of genres, from steampunk (“Parabank” inspired by Jules Verne) to retrofuturistic and space fiction. 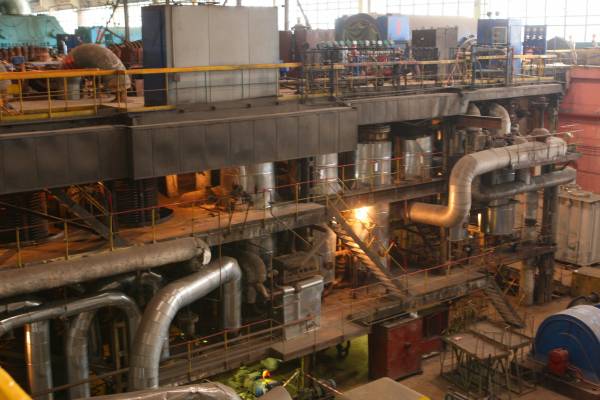 The engine room. Recalls an illustration of steampunk books

The reconstruction provides a huge range of works: replacement of turbines, transformers, excitation system of turbine generator, an electrostatic precipitator for cleaning gases; fully rekonstruiruet generator and system PEREPODGOTOVKI. But the most difficult task was replacing the old 130-ton drum for a new, 118-ton. Despite considerable experience DTEK reconstructed 17 blocks on different stations, two of them in Burshtyn TES, — it was a real challenge to the skill of specialists.

— Never, including the Soviet Union, boiler drum, which is on the very top with the boiler is not removed while maintaining its integrity. He was cut to pieces right there and pulled in pieces, says Grenier. — We are now saving money and hoping that it can be used on another pot, it was removed. This operation is not described anywhere. In the boiler compartment there are two cranes, capacity of each is 50 tons. And the drum weighs 130 tons. But we have put an additional load-lifting device, devised a scheme and implemented it. The difficulty is that when, say, the rise we can slightly level up the cargo, check the operation of the mechanisms. And then — descent from 41 meters high, the slightest mistake, everything must be done the first time.

— Almost all the time, when we are dealing with such equipment, the unforeseen problems that haven’t met before. Technical decisions have to be made at each repair, we have our own design team, these are people with scientific degrees. I’m a Ph. D., worked at the University, research interests and real-time system, in particular, the side of the first article was in the “Space science and technology.” So, for analogy, when you design a satellite or spacecraft that will travel to Mars, you will never be able to test it in real conditions. There are special design events, which let directly into the design stage to pass the test in real world conditions everything worked correctly. This is a scientific approach. We use scientific approaches to solving non-trivial engineering task.

— You didn’t think to write a thesis after the reconstruction?

— We have every repair you can write a limitless number of dissertations laughs Yaroslav. — It would be the time. If the people at the University, lack of practical material, to people working here, not enough time to this issue.

Drum with the 10th block is already on the rails — it is checked for defects and if all is in order, will be transferred to the first block, the one that is in overhaul. New drum rise up is easier — it is easier, and the scheme worked.

— Boiler repairs can be made the new: replace the pipe heating surface and you have a new boiler. The turbine harder to do, there’s a lot of complex machining, which makes specialty. But the hardest part is the generator. First, make a new generator — it’s six months, replace the coil — the same six months. Defects generators are more difficult, they need to pay more attention. For the analogy… have You seen how huge the pot. 200 megawatts concentrated in the 40-metre giant. Further, power is concentrated in the volume of the turbine, 5 meters in width, 30 in length. And then the generator, a cylinder length of 8 and width of 4 meters. Like the matryoshka doll, we compressible, compressible, compressible this power. So the boiler is, of course, a lot of work, it is difficult physically, but more importantly it is the generator. There is a lot of equipment, few people, highly skilled, very delicate work.

On reconstruction now employs 260 people, later will be about 600. The overhaul involved 300 people. This is a huge human resources specialists working in two shifts. And work on different nodes at the same time being — of the people working on the boiler section above the turbine part of the generator. Coordination of schedules start when you make a pairing between the elements. 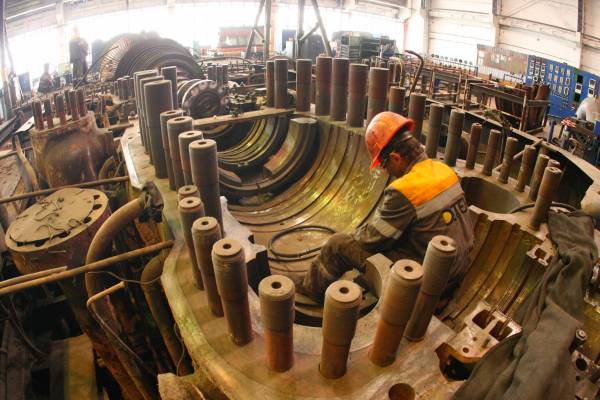 Inside the Leviathan. Repairers clean the inner surface and check them for defects

At Burshtyn TPP and other enterprises of DTEK, the system of lean production — when the production process excludes all losses of both time and inventory. This is the legacy of Japanese auto giant Toyota.

All know Henry Ford. Mass production of cars, “the car in any color, as long as it was black”, the huge American market — you can swim in the money. But Toyota was starting its activities, had a limited market and could not afford mass production because customers wanted different cars. So the company had to develop principles that allow to eliminate any loss in production. The same principles are being implemented and we have — last year the whole company so saved a substantial amount, says Grenier. — Actually, this system provides that the head must always be in “Gemba” — the place where added value is created. There is still the principle “come and see”, do not focus on the stories of subordinates.
However, modern systems do not interfere with the repairmen to have their signs. For example, Jaroslav laughs, showing oily form, to wash clothing until the end responsible not like to shave. General appearance. The casings of the turbines are painted in yellow and blue

Right next to the entrance of the reservoir, fish the locals — who with one rod, and who put more. Fish, they say, is great — and show catch, bucket carp and carp a pound each. To catch here are not afraid that this is it, all repairs and reconstruction of Burshtyn TPP, in addition to the production improvements that have an environmental component. So, since 2012, the company invested in environmental protection 292 million (80 million in 2017).

We not only implement new approaches that meet the most rigorous international standards, but also create an effective system of monitoring the impact on the environment, — said, in particular, the head of the Department of eco-DTEK Energo Irina Verbitskaya.

So, after the installation of new electrostatic precipitators at unit No. 7 (according to the technology of Alstom, France) and unit 5 (technology rafako sa-SA, Poland) the emissions of particulate matter in the air decreased to 22-24 times. This year, similar work will be conducted on 10 units. In addition, the company has a program to reduce the impact on water bodies (adjacent to the station is a huge reservoir) and installed a new system of ash disposal areas that will utilize saleslocation without increasing the area of storage (no additional land). 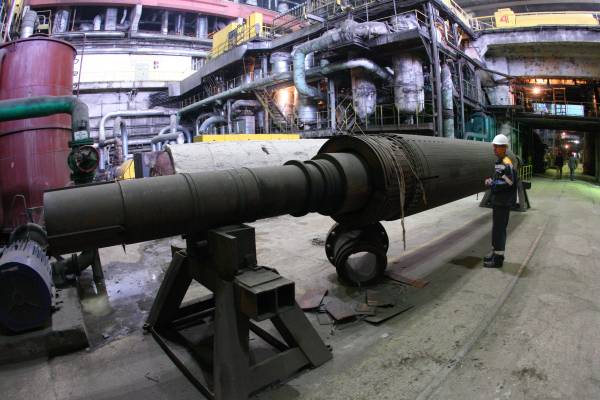 Parts for the station. At those scales look small