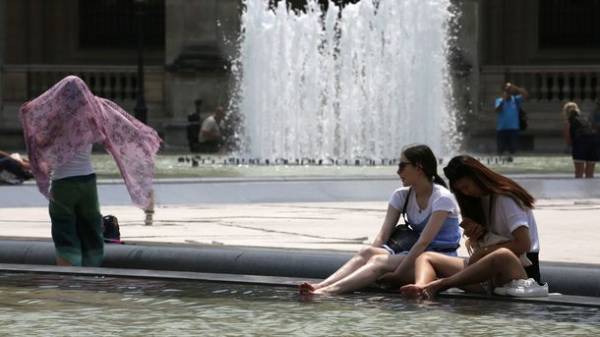 In Ukraine this weekend is expected to relatively cool weather. So, air temperature will range within 20-23 degrees above zero. On Saturday thunderstorms will be in the West, and on Sunday will move towards the North of the country. Next week, despite the rain, the expected drastic warming in the West and South the temperatures will rise to 33 degrees Celsius. The website “Today” found out what weather to wait for the Ukrainians this week.

The eighth of July thunderstorms will be in Western Ukraine. The temperature will range from 21 to 23 degrees above zero. In the Transcarpathian, Volyn and Rivne regions it will be partly cloudy.

In the center, on the North and East – no rain. Relatively warm weather is expected in the South of Ukraine. In the afternoon the air warms up to 24-26 degrees Celsius. In the North, centre and South, from 21 to 23 degrees. In the capital the thermometer column will fluctuate in the range of 20-22 degrees. 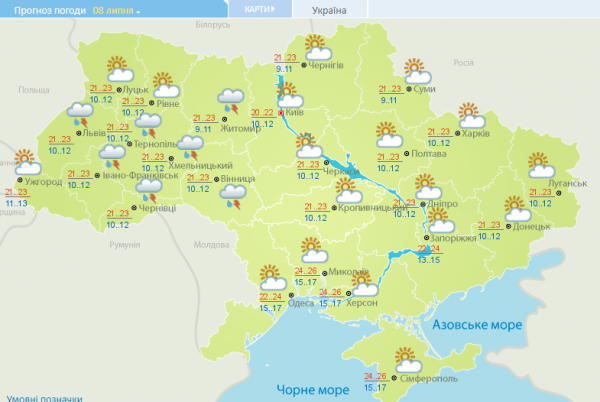 On Sunday, the ninth of July, thunderstorms will be in Zhytomyr, Kyiv, Chernihiv and Sumy regions. Precipitation is also expected in Kherson, Zaporozhye and Donetsk regions. The rest of the – partly cloudy.

In the West, the air warmed up to 21-24 degrees. In the North and the capital, the thermometer will fluctuate in the range of 20-22 degrees above Celsius. In the centre and in the East from 21 to 23 degrees. At the same time in the southern regions of Ukraine is expected warming up to 24-26 degrees Celsius. 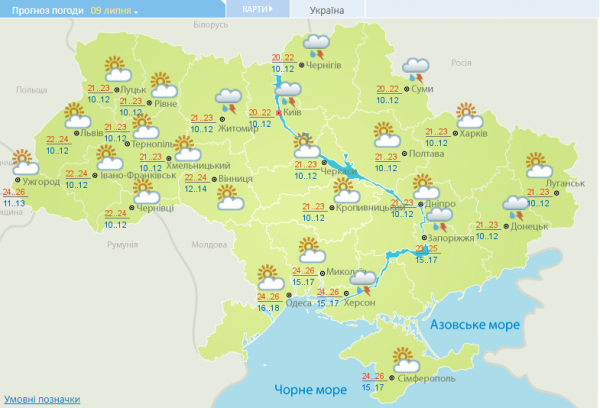 Monday precipitation will be held in Lugansk, Donetsk, Dnipropetrovsk, Kharkiv, Sumy and Chernihiv regions. In the South the temperature will fluctuate in the range of 25-27 degrees, the same weather is expected on this day in the East, West and center of Ukraine. 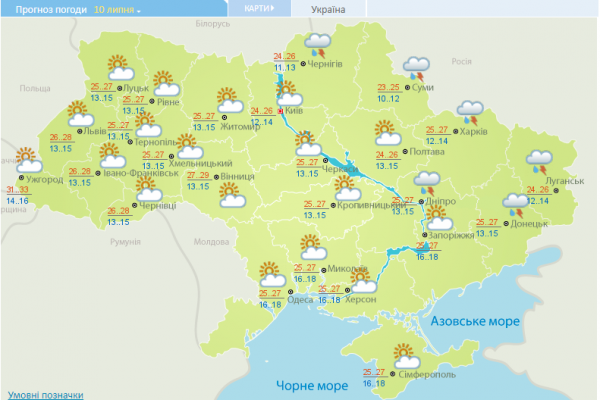 July 11 is expected a sharp change in the weather. The West of Ukraine will cover storm cyclone, while the temperature will rise to a record this year of 33 degrees Celsius. The rest of the – partly cloudy. In the capital the air warms up to 26-28 degrees. In Chernihiv, Sumy regions – from 23 to 25 degrees. In the center and East of Ukraine, the thermometer will range between the marks in 25-27 degrees.

Relatively hot weather expected this day in the South. Here the thermometer column will rise to a level at 31-33 degrees above zero.

The eighth of July, the sacred memory of the Holy Prince Peter and Princess Fevronia, Murom miracle workers. The Holy couple was famous for its piety and charity. Peter and Fevronia died on the same day and hour. They’re an example of Christian marriage. Our ancestors noticed, from this day on we should expect even forty hot days, informs a portal “Weatherman”.

The tenth of July, the day of the icon of the Tikhvin Mother of God. Also on this day, is revered the memory of the monk David of Soluneia. The Holy nation is called Strawberry because by this time, kept pace with strawberries. Our ancestors believed: who wants to borrow money, he must put herbs strawberries in your pocket and safely go – failure will not. To know weather, in former times followed the grass if it is dry in the morning, the night we should expect rain.

The tenth of July is the commemoration day of the venerable Sampson strannopriimtsa. People know the name of this day Samson Sengnai because often 10 Jul rain, which in turn spoils the hay. If the rain that day happens, it will go to Indian summer. And if the weather is nice Sunny, you will hold it for another seven weeks.

11 Jul revered the memory of the monk Sergius and Herman, Valaam miracle workers. From this day already you can dig early potatoes. In the old days noticed that before St. Peter’s day (12 July) the sun is unusually burned, spilled paints. On this day, our ancestors listened to the cuckoo: if she ceased to sing winter had come.

July 12 is the commemoration day of the glorious and all-praised first-ranked apostles Peter and Paul. This day is considered the top of summer. Our ancestors noticed if clearly on St. Peter’s day – the year will be good, and if it rains 40 days will still be bad weather. Most often, this day is dry, hot, bright. For this reason there was a saying: “Peter-Paul heat added”. If the cuckoo cuckoo after St. Peter’s day, then summer will be good, long and the snow will soon fall.