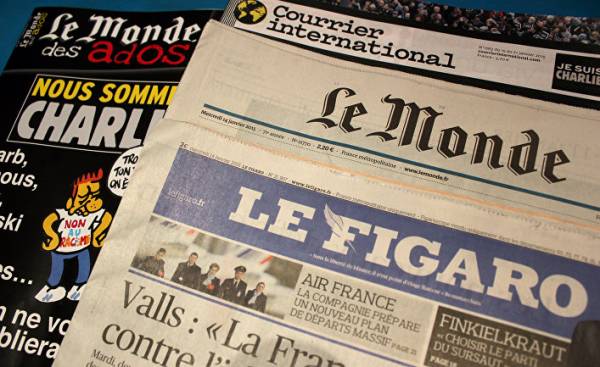 Two days after the presentation of the project Gravity, which implies the exchange of data between the French media, Le Figaro and Le Monde announced on 6 July, the Alliance in the field of advertising. Initiative called Skyline aims to pool their digital advertising space.

More specifically, referring to one or another holding company, advertisers and agencies can run campaigns directly on the websites of Groupe Figaro (Lefigaro.fr, Linternaute, Le Journal des femmes, Madame Figaro…) and Groupe Le Monde (Lemonde.fr, Telerama.fr L Obs, Le Huffpost…) in the identical format, at uniform rates and General control system. We are not talking about a merger or the formation of a common company and joint sale of services: advertising the space of two holding companies in the video and on the framing of the pages.

With regard to the sale of Newspapers, the Internet audience and advertising, not to mention the editorial line, Le Figaro and Le Monde remain eternal rivals. Therefore their Union on the advertising front says a lot about the logic of alliances, which today are being forced to follow the wording in terms of the incredible rise of Facebook and Google in digital advertising, including mobile.

“Both our companies have come to the same conclusion that conditions in the market develop unfavorably for premium information content, — the General Director of Le Figaro mark Feuille (Marc Feuillée). — We need to bet on our strengths, playing up the quality of our materials and classrooms, as well as offering advertisers the simplicity, trust and transparency”.

Seen in this Association and desire to expand coverage. According Médiamétrie Netratings in may this year, the cumulative audience of the two holdings on all carriers has 35 million unique visitors. In France, this puts them in fourth place after Google (44 million), Facebook (40 million) and Microsoft (36 million). In addition, companies strive to stand out with the promise of reliability despite the fact that the market is now established distrust. “With us, clients know what to invest,” says Marc Feuille.

The fact that the software segment (gaining momentum automated advertising) is not associated with the media companies (Teads, Advideum…), which sell to advertisers “bouquets” of multiple sites. As a result, the advertiser or Agency becomes more difficult to monitor and evaluate the progress of the campaign, which is “smeared” across dozens of sites with a heterogeneous environment. In recent months, the advertising market, there were several crises in connection with the concerns about the “safety brand” (companies don’t want their ads appeared next to content provocative or sexual nature, for example, on YouTube) and the unreliability of the audience, which promise advertisers certain platforms such as Facebook.

Figaro and Le Monde tend to take things into their own hands. We are talking about an important economic issue: they do not want to give part of the turnover of facilitators and hope to raise the value of their advertising space, where there is a focus on premium content, and quality information. Skyline also offers control over the progress of the campaign through independent partner Integral Ad Science.

To this is added the desire to improve the “user experience” with the reduction in the number of formats (they must be “qualitative and unobtrusive”) and motion data to third parties, which is especially important against the background of a possible revision of the EU Directive on privacy and electronic communications. The initiative also draws on the reflections of the international Association Coalition for Better Ads, which is based the largest representatives of the field of digital advertising and advocates for the development of less invasive standards, which is extremely important in the development of “blocker” of ads.

Unlike Gravity, which strives for “the greatest openness” and includes companies such as Fnac-Darty and SoLocal to attract maximum data, Skyline is limited to two speaking on this initiative by enterprises relies on the “simple operation”. The launch of both projects, which embody two different approaches to the problem, scheduled for September this year.