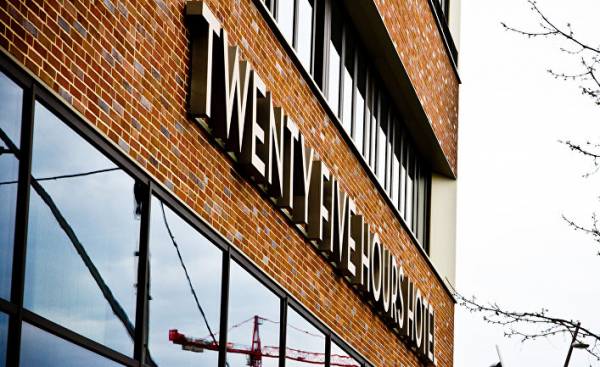 Anyone familiar with simple, focused more on hipster style chain of hotels, 25hours, will be affected. Photos of Suite hotel Altes Hafenamt in Hamburg’s HafenCity district shows the gilt chairs in the style of Louis XIV, a Golden sculpture of a Nude woman who stands on her knees and on her back — glass table. Globe that says Make America Great Again (“Make America great again”), a lush wig of blond hair and Russian doll gift box also decorate the interior.

SPIEGEL ONLINE: You have equipped Suite for trump, though the President of the United States, at least during the G20 summit, no plans to stay at your hotel.

Bruno Marty: No, no plans. But purely aesthetically, we did everything to feel comfortable. Probably, the level of service in our hotel would have been high enough for the American delegation: we — most Deluxe hotel and do not offer everything to everyone in the room.

— You’ve given the room a German newspaper Fake News (“Fake news Germany“) and the shampoo brand “Schwachkopf” (“Stupid“). Assume that you — not a fan of trump.

— Right. Action, of course, have been agreed with our partners. It for us is more about style, about a certain culture life than politics. What is important is openness and cooperation.

Hotels 25hours and the Honey Agency announced the auction for the night in the Suite next weekend. The one who offers the highest price on the Ebay platform, will be able to enjoy the extraordinary luxury and dinner. The rescue network donate to “Climate without borders”. For not accepting climate change, chanting the words Fake News! (“Fake news!”) and not respecting women President of the United States having narcissistic traits, it could be an insult. This is an unusual event for a normally politically-neutral hotel industry.

— You are afraid that trump will resent your promotion?

— I hope not. A little bit of humor I expect, even from the President. Of course, I don’t believe he will seriously take action as a company, we are not important enough for the President of the United States.

— As far as we know trump, otherwise he would have walked by you on Twitter.

— It would be a natural crown of this action.

If you look at the design of your hotel — hammocks, bright paintings on the walls, lots of wood — which the head of government would then be your favorite?

The concept of our hotels is, in principle, does not provide for visits at the state level. Maybe someone of the chapters and could imagine to visit our hotel as a private person. But I would not like to discuss what we would like to see in our hotel. We try to stay away from politics. We have our own position, and it is expressed in this action. The rest, of course, we welcome everyone. Since we mainly orientirueshsya on the younger generation, rather, we would expect on the visit of the President of France Emmanuel Makron or canadian Justin Trudeau than to the arrival of the 71-year-old President of the United States.

However, the Makron during his state visit to the Hanseatic city will stay at the hotel Mövenpick in Schanzenpark. Besides him, at the G20 summit on 7 and 8 July there will arrive heads of state and government of the 19 leading industrialized and developing countries, including several hundred members of their delegations. Trump place at Senate house on lake Fettig, and Angela Merkel, as the canadian Justin Trudeau, will stay in the rich tradition of the hotel Atlantic Kempinski on the Outer Alster lake.

— Who stay with you?

— Of course, I can’t say who among us will stop. But mostly guests from the summit. Three of our Hamburg hotel booked for several days ahead, as indeed for the whole weekend. Solo travelers currently shun the Hamburg, I do not know whether this is due to high prices or the availability of the hotels. I don’t think this summit has such a deterrent effect in the world it did not cause such a huge wave in the media, as in Germany.

Two of your hotels in Hamburg located in the HafenCity — are there any restrictions due to G20 summit?

— On Friday, these hotels will be exactly on the line of the security zone around the Elbe Philharmonic hall. Thus, officially, we are not in the area of increased control. But we warned guests about the need to have just in case the identity documents. With the restrictions will face those who want to explore the HafenCity area, you can go there only if you have grounds for it or you live there.

And the car is best left at home?

— Yes, it’s another order. But Hamburg is not unusual on weekends to the center by car it is better not to go. We held marathons, the days of Harley at the end of June or the Schlagermove festival in mid-July.

This week announced numerous protests against the summit — Kanu-Demo on the Alster and Demo-Rave to the left alternative summit. Most shops are afraid of unrest from demonstrators in the Central part of Hamburg, mönckebergstraße to the quarter galleries on the street Neuer wall and Genzemarkt. Some shops closed early and boarded up shop Windows with wooden boards. HafenCity in stores on Friday, will be closed because politicians are expected at the concert at the Elbe Philharmonic hall.

— You are afraid for your Windows?

— No. We don’t believe in HafenCity will be riots. In addition, around our building has never been so many police. Every week I visit Hamburg, but so many police, both in the airport last week, or in St. Joseph Church, I have never seen.

Bruno Marty, 39 years, head of the trademarks of the hotel chain 25hours, which has ten hotels and 18 restaurants in Germany, Austria and Switzerland. Of the three Hamburg hotels, two are located in the HafenCity area. Marty lives in Switzerland, but almost every week he travels to Hamburg.