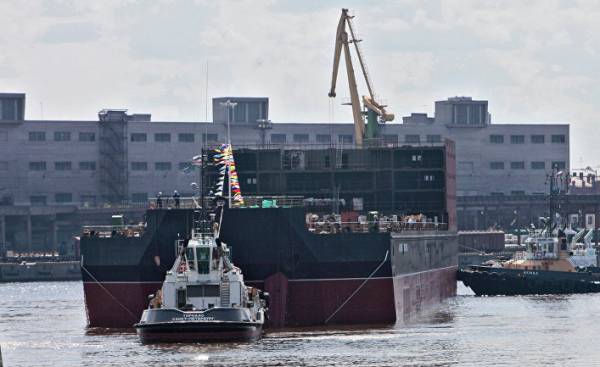 Next summer the Russians are going to tow the floating power unit “Akademik Lomonosov” across the Gulf of Finland in the city of plentywood located in Eastern Siberia.

The Director of the Center of radioactive safety (STUK) petteri Tiippana (Petteri Tiippana) told reporters of the newspaper Ilta-Sanomat about the risks associated with a possible trial run of unit in St. Petersburg. It is unknown where it will experience the installation, the length of which is 144 meters, and on what power, because the concern Rosenergoatom has not given this information by the Russian officials.

According to representatives of the international environmental organization Greenpeace, the project is in serious doubt.

According to the radioactive safety Center of Finland, capacity and technical equipment floating nuclear power station can be compared with an atomic icebreaker and a submarine.

Its capacity is 70 megawatts.

“In the event of a failure in a small reactor could release minor amounts of radioactive substances. If a decision is made about testing at the shipyard in Saint Petersburg, there is a need to provide for the emergency. For the Finns tests in St. Petersburg and transportation of the vessel in the international waters of the Gulf of Finland represent a very small risk. Personally, I wouldn’t have to worry too much,” says Tiippana.

Unused nuclear fuel is not radioactive

According to Tiippana, the leakage of radioactive substances from the plant can not happen, even if it will sink or disconnected from the tug.

He says that while towing, the installation will in any case be turned off. If the tests will be carried out in Murmansk, up to this point the installation can be considered as ordinary vessel.

If the reactor will start in St. Petersburg, his fuel will be radioactive.

“But in this case the risk of leakage of radioactive substances is minimal, as during transport reactor will be down, and all contours of the station will be blocked.”

The radioactivity level of the fuel in the reactor increases, depending on what power it will be tested.

This, in turn, affects the amount of leakage of radioactive material in the event of an emergency. Testing will be conducted in stages.

“At the stage of commissioning may fail, but during the tests aim to ensure that the security system worked as planned. If testing will be carried out at low power, the level of radioactivity during transport will also be low.”

The Norwegians are concerned

Very concerned about the upcoming transport of Norwegians. In the worst scenario, a nuclear plant may suffer a shipwreck off the coast of Norway that will hurt tourism and fishing in Norway.

“If the reactor will have to be towed into a fjord because of sea state, people will not like it, but it’s more a question of image of Norway,” — said Tiippana.

According to Tiippana, Russia informed the radioactive safety Center of Finland about the upcoming event. Russia has not yet made a formal decision concerning the conduct of tests in a test regime in St. Petersburg. Two weeks later, Tiippana will go to Petersburg to get acquainted with the project.

The international environmental organization Greenpeace, according to Finnish news Agency STT, hopes that the trial will be moved from St. Petersburg to another place, and that the unit will be towed to Murmansk empty. The organization is not enthusiastic about the project.

“In any case it is a foolish project because the installation will still need to haul across the Arctic ocean”, — said the Agency STT in charge of energy of Yahki Harkonen (Jehki Härkönen).