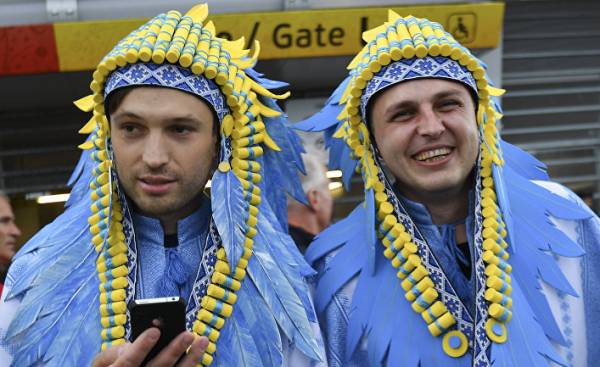 In Ukraine, like to remember the past — both distant and recent. On the one hand, the events of 1917-1921, world war II, Soviet totalitarianism. On the other — the Euromaidan, the annexation of Crimea, the first months of the war in the Donbass.

But between close and distant historical drama is SideShow, deprived of our attention. The period of modern Ukrainian history, not marked by something of the heroic and the gradually washed out of collective memory — though important and instructive. With it is associated an anniversary, which is today will remember a few.

Five years ago, on 1 July 2012, the Ukrainian capital ended the championship of Europe on football.

Event, announced a landmark milestone for our state, and in some sense truly iconic. The notorious Euro-2012 was a high point of development, the apogee of the former Ukraine — the amorphous, the stagnant, heated and overflowing with internal contradictions.

It was the biggest simulacrum, which could create the country living with illusions. For a few weeks in unison merged everything: Yanukovych vain, selfish oligarchs, corrupt officials, opposition optimists, full of pride the patriots, clinging to the television folk.

From outside could seem that this is real life, gradual progress, a genuine rapprochement with Europe, and it would continue.

If at that point, a random guest from the future told the Ukrainians about the snipers on Institutska, “green men” in Crimea or reconstructed battles for Donetsk airport, his story would consider schizophrenic delusions. Meanwhile, all the prerequisites of future shocks is already present.

Viktor Yanukovych has already made it impossible for peaceful change of regime by sending to jail former Prime Minister and former Minister of internal Affairs. The price of parting with power in Ukraine has increased dramatically, heralding us to the inevitable bloodshed.

In turn, Vladimir Putin has made it impossible to save the Ukrainian multi-vector or a peaceful drift to the West. The Kremlin leadership has already started construction of the USSR-2 under the guise of the Customs Union, and before that tried in Georgia military methods of dealing with unyielding.

However, we would like to believe that everything will resolve and forms that intractable conflicts will somehow be resolved — and we believe in the best. While the upper classes enjoyed the illusory stability, the lower classes were content with the illusions of European integration as a pompous football festival. Ukraine five years ago proved that distinctly stood against the wall, “mene, Mene, TEKEL, UPHARSIN” does not prevent to feast and enjoy life.

But the insight into the newest Russian history not only reminds of past errors, short-sightedness and unwillingness to see the signs of impending disaster. In addition, it demonstrates how naive arguments about the unchanging “national mentality” that determine the development of the country.

Suffice it to recall, as we were in 2012 and what we see ourselves and the world now. Now we do know that Ukrainian is first of all a born warrior, a descendant of the warriors of the UPA (of extremist and banned in Russia organization — approx. ed.), the spiritual brother of the brave men of the IDF.

But five years ago, the typical Ukrainian feature is considered non-violent methods of struggle. velvet Ukraine willingly contrasted Russia with the Moscow battles of 1993 and the Chechen wars. As example was mentioned the first idyllic, independence, and the few who came to mind that his peaceful character was due not so much to the “wisdom of our people”, as the notorious Kuchma’s refusal to use power.

As a popular Ukrainian politician in that time saw its own Vaclav Havel or Mahatma Gandhi — and it was those same leaders who are today talking about the family resemblance of Ukraine with the militant Israel.

Now we scoff at the Russian opposition, aimlessly marching through the streets and not able to throw at riot police even one lousy Molotov cocktail. Here it is, a neighbor’s slave nature in all its glory! But just five years in Ukraine it was considered axiomatic that the only peaceful anti-government protest can be effective.

Progressives were arguing about whether to stir up apathetic Ukrainians and take to the streets at least a few tens of thousands of peaceful protesters. The implication was that they just stand on the Maidan, and Yanukovych’s regime won’t survive. And small radicals, ready for more action, without hesitation declared “provocateurs”, which was allegedly hired to discredit the Ukrainian national movement.

Now we avidly follow world events, easily emerging as the experts in the USA, France or the Middle East. Ukrainians genuinely take offense, when faced with a lack of understanding of our problems in the West, underestimating the Kremlin’s threats, with insufficient attention of the Europeans to what is happening in the Donbas and in the Crimea. But some five years ago, a disallowed goal against Marko Devic in the match Ukraine-England meant to us immeasurably more than a fierce battle for the Syrian capital.

Then the Ukrainians could shake the murder of Oksana Makar or four shooting guards in the SEC “Caravan”, but not the storming of Idlib, the shelling of al-Rastan or the massacre of civilians in HOMS province. Foreign drama didn’t care about not only a national citizen, but also advanced, caring, thoughtful citizens. Few of us could imagine that happening in other part of the world is directly related to the Ukrainian future.

Yes, times change, we change with them, and you should not pretend that Ukraine made their world from time immemorial. For the most part, our current “national mentality” — the fruit of accelerated evolution, which took only three and a half years.