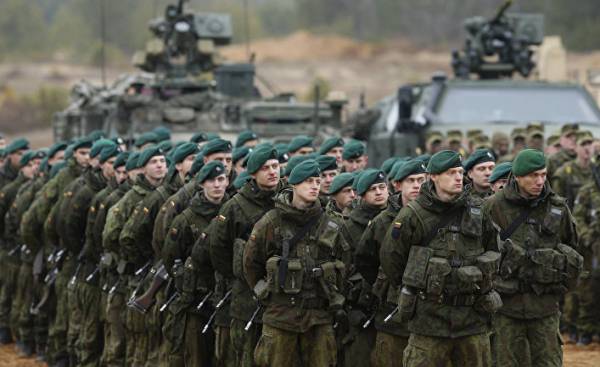 When I was going on a business trip, I was repeatedly advised to prepare for war. Of course, not literally. It was about the war, sprayed in the air and settled in the minds of the real fear of the invasion of Russia in the Baltic countries. For me, it was funny and crazy — well what a war with Europe, what are we talking about?

The idea seemed so ridiculous that I was convinced: to believe in the possibility of it can only some repulsed by conspiracy theorists in tin foil hat. I could not imagine that when you arrive in Lithuania, so many intelligent and sensible people are quite serious to Express such concerns. And it definitely was one of the most difficult experiences to understand the level of tension that has arisen not on an empty place.

When news stories appear that Russian or Lithuanian military conducted some provocative exercises and make each other unpleasant surprises on the border, it all looks like something a toy and not serious. If this tension exists only on the pages of Newspapers and not at all connected with the real experiences of ordinary people, not involved in populist political debate. In fact, it was a bit different.

In Kaunas I met Edwardson Vaisvilas, a young translator. He told me about his amazing transformation from pacifist to soldier-volunteer of the Lithuanian army. His story was much more succinct and revealing than all the abstract talk about the Russian threat and the intricacies of militarism. It is in chronological order and very lucidly explains the logic of the fear of war.

Edvardas not impressed a military man — his piercings and tattoos go against the stereotype of military unification. A few years ago, he would not believe it myself that you see in the mirror soldier of the Lithuanian army, which every weekend puts on the uniform, uniform and goes on teaching. Edvardas never really wanted to serve. The idea of open conflict, the use of weapons to another person was unacceptable for him. In his youth he was a rebel who listened to punk rock and industrial music, wearing appropriate clothing and hairstyle, for what repeatedly received in the face from intolerant to nonconformists citizens. But Edvardas had never been in a fight and beat nobody, he thought that was disgusting. He wanted the world to live without violence. Submission of Edwards about the army at the turn of the century was shaped by stories, mainly about the Soviet hazing, bullying and nonsense. It all is not attracted, he was not a fan of physical activity and prefer dumbbells books.

After school Edvardas went to study psychology and when I was done, decided not to run from military service, despite all the stories about bullying and a clear idea of the service as a waste of time. In the military he was asked whether he wants to serve or not. Edvardas honestly said no, and explained his position. Looked at it and said to go home and homeland and so someone will protect. Went 2002.

Over the next few years the life of Edwardas greatly changed: he had to give up on psychology, became a translator, started a family. In 2008, Edvardas was vacationing in Ireland when his friend sent a text message: “the war Started”. It was about the Russian-Georgian conflict. The word “war” was largely excluded from public discourse, Lithuania at that time, joined NATO, and felt quite protected, and society has long been discussed that conscription is generally not a very sensible thing, and just a month after the Georgian events, he was going to cancel.

Then Edvardas became interested in international conflicts, politics and for the first time in a long time felt some concern. On the one hand, the Caucasian events had a long history and generally were somewhere in another part of the continent, but on the other hand, it was closer than it might seem at first glance. After some time, a small Georgian war is gone, but the residue remained.

Was 2012, Edvardas was sitting at home with the family and once told his wife: “There is a phrase: the history of mankind is history of wars. In Europe always was in some kind of war. But after the Second world war we have almost no one fought. In Ancient Rome there was a period of Pax Romana — the Roman peace. Now we have Pax Europiano. We are a happy generation, because we live in a wonderful time when you can have children and not fear for their future.” Edvardas says this is best illustrated his the then attitude.

“And then the Maidan began in Ukraine, — says Edvardas. I was very worried. Remember that fear: my wonderful world — Pax Europiano — is crumbling. It may not be. When they started shooting on the Maidan, I could not sleep at night, I had open from a few broadcasts, and I watched people die on the streets, I looked at those burning tires. It was hell. It was very close, Ukraine — our neighbors. Georgia — a little different, after all. This conflict shook me, but not as Ukrainian. I thought, what if it happens to them why it can’t happen here”.

The Ukrainian crisis has changed the mood in Lithuanian society. Policy unanimously began to raise military spending, soon returned and conscription. And Edvardas felt fear because of the statements of the Russian deputies, because of the tone of the debate, and particularly by the annexation of the Crimea. He realized that the world order that he imagined, very fragile, and things can change. And, probably, it was difficult to think differently when some Russian policy in Imperial frenzy declared that Crimea is only the beginning, on the order of the rest of the “scattered” areas.

In 1991 Edwards was 11 years old. It is well to remember January events of that year. He woke to the sound of sirens, his parents then watched TV. They did not participate in the liberation campaign, did not go to defend the television tower, stood in the “Baltic way”. Edvardas’t know why it happened and can’t ask them. In 11 years he did not particularly understand, but when he grew up, he felt some irrational guilt that he was not involved in the struggle for independence.

Ukrainian events have stirred in him the unpleasant feeling of unpaid civil debt. He watched an interview with the activists of the Maidan, did not always agree with them, but respect them as citizens. Even before independence some friends of Edwards signed up as a volunteer. They were conservatives. Edvardas as such has never been: his views were the ideas of liberalism and socialism, and the image of the world was a utopia of universal friendship without borders and barriers. But with age, his views evolved, he felt that he wants to live in your city, to speak their language, and if someone threatens the safety of his family, we need to do something. And events in Crimea gave him a response that specifically to learn to fight.

On the Day of independence of Lithuania and the Union military shooters usually put up tents, stands, tell us about yourself and lead set. Edvardas just walked past this tent and talked with a man in uniform. He explained to Edwards, what is the difference from the volunteers. Arrows — civic organization which has a military Department, and volunteers purposefully taught to fight.

Edvardas thought about it and decided that it was time to go to the army. Edvardas was one of the older volunteers: among them were a lot of young people from 18 to 25, someone just interested in military Affairs, someone who loves extreme sports and Hiking, were intellectuals with a keen sense of duty, someone 20 euros per day fees seemed a good addition to scholarships, some were preparing for service in the regular army under the contract. But clearly to divide people into groups it was difficult — all were combined motivation. However, they are United by the fact that no one was itching to shoot people and be aggressive.

Edvardas did not want to kill anyone and hopes that he will never have to do that. However, for several years he learns the war, he was doing really well shoot and command small groups. What makes the volunteers at the camp, and remained a mystery to me. Edvardas is a very responsible attitude to his service, and is afraid to tell something superfluous. He says it’s not because I’m Russian soldier, in principle, not supposed to talk about what he does in the service.

Every week, at the weekend, while everyone was still asleep, early in the morning Edvardas out of the house. It is transformed from a peace-loving translator in the ordinary army. In uniform, with a huge tridtsatigradusnuyu a backpack on his shoulders. Together with other volunteers to exercise in the cold and heat, torrential rain, he walks through the forest, crawls, shoots, sits for hours in ambush and prepared to attack. Who exactly will attack is unknown, the enemy has a lot of funny names, such as Bearlandia — the country bears, or anything like that. Nobody sets against a particular country, nothing elaborate, but it’s clear to everyone that they prepare for Russia.

The most magical place on Earth: the river Chinatown

Geopolitics is not a joke