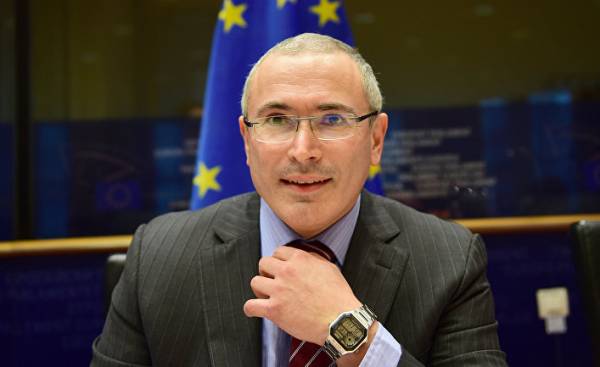 FAZ: Mr Khodorkovsky, in many Russian cities have recently passed the demonstration and was established a local campaign headquarters of the enemy of the regime Alexei Navalny. What we see now is the beginning of a new movement that can lead Russia to a change of government through elections?

Mikhail Khodorkovsky: This movement is certainly a new the peak of the protests. But I do not think that in Russia today it is possible to change the government through elections because the election law was changed under Putin in such a way that none of his opponents can’t expect to win. Putin may exclude any, he may be ordered to count the vote the way he wants, and no one can control.

— How then can the change of power in Russia? A revolutionary way?

— The first possibility, which we all hope, as follows — Vladimir Putin sees the end of his next presidential term in 2024. It would be a good option, but I wouldn’t be too rely on him. The second option is harder, because it is beyond the scope of existing laws. This will change by pressure from below. But this will not happen at this stage of the protests. They are geographically more restricted and primarily one segment of the population — the youth. But the probability is that the next wave of protests in a few years will cover all of society.

— Will the regime before the presidential election of 2018 concessions to get more legitimacy or repression tightened?

— It would be very extraordinary if the ruler allowed elections to a real opponent. The problem is not how popular the opponent, but the fact that people are really tired of this guide. And this feeling can be discharged in different ways — people will not go to the polls or just vote for someone else. Why the rulers have to cook for themselves these problems? I don’t think that the public authorities now need to step up repressions. Protesting youth, but we are not Egypt, where the average age is 23 years. While the protests will not cover the older generation, it is unlikely that they will become dangerous to the rulers.

— To what extent, in your opinion, the regime is ready to violent solutions?

— We know that they have a unity which is not ready to contain the masses and to attack. But I hope that Putin can’t ready. I think that, in spite of everything, there are certain barriers.

— What needs to happen in the future with all officials, judges and police that now form the basis of the Putin regime, such judges who have sentenced you to a prison term?

— The fault of these people needs to be addressed individually. I am strongly opposed to talk — we’ll send them all to jail. But, unfortunately, a situation in which all of these people just can’t say — well, all is forgiven. Need details to investigate who, what and why did. And obviously, you need to start now.

— Do you think you need now to start with this?

— You need to begin to gather testimony and documents. And it should be made clear to these people: everything you do is a crime. Your family, your loved ones need to know that you should be responsible, when the country will again be normal justice. These people need to understand that it is a matter of individual guilt, that responsibility involved not only one Putin. They volunteered for this service.

— Similar question, but on the other hand, You often said that under Putin in Russia, all state institutions were destroyed. What kind of people you can restore them — if not with officials who are now serving this state?

— I want to explain this with an example, which is the most painful — the judges. In Russia annually considering the two million criminal cases. Only two percent of them — political Affairs, in which it is about to seize someone’s property or persecute a political opponent. Every court has one or two judges who are responsible for these things. The rest of the judges they are not transferred, because there will be conflicts. This raises two parallel systems — one that works more or less normally, and the second is politically motivated. To explain this with an example, imagine works in a hospital a good surgeon who in 98 cases out of a hundred operates well, but in two cases by order of the chief doctor cuts the patient’s throat. Do you trust this doctor? No. But does this mean that the hospital have to close? No, the problem must be solved by removing the chief doctor and crazy surgeon. All the other doctors can stay.

But the problem of corruption in state institutions, e.g. police, is wider. Do you have any idea about how to deal with it?

— Corruption has two political source. First, the most unpleasant, difficult to overcome, it is a tradition that is rooted in Soviet times. The second source is the key to the solution. Putin deliberately uses corruption as a system of managing the state apparatus. Who doesn’t pokupaetsya, can’t go any further because it is not reliable. Need to get my hands dirty. Because then it becomes manageable. We need to behead this corrupt system, then the situation is again rapidly coming up.

— Whether the opposition in Russia to unite in a single front, or should continue to operate the different forces and parties?

Is the fundamental problem that we are now discussing.

— There is now almost a monopoly of Alexey Navalny.

— As for street protests, then Yes, without a doubt. My position on this issue is unambiguous. The idea of the good king will not help. Any Tsar in Russia — bad. It would be wrong to oppose the monopoly of the authoritarian state monopolized the opposition. The opposition should have a coalition structure. Supporters of Navalny are telling me — and quite rightly — that for the Russian mentality accustomed to seeing a single leader. But this is the path to the next round of authoritarianism. It is in any case does not mean that Navalny is necessary to weaken, on the contrary, he needs help. But at the same time we have to help other segments of Russian society, representatives who are ready to work in coalition. At the time of the change of government the people must be prepared jointly carry out political reforms. You can then go and compete during fair elections.

— What role do You see for yourself in the future of a democratic Russia?

— I do not plan to. The only thing I’m pretty confident that I won’t participate in presidential elections or something like that. But without a doubt, I am ready to cooperate with the transitional government.

— What kind of relationship the West should support the opposition?

— West is considered a Pro-European part of the Russian society as a natural ally. It is imperative for us as his moral position. If it is important business, and he together with Putin to plunder Russia, and helps him to hide money overseas, it hurts our position. In addition, the rigidity of the regime is weakened, if he realizes his overly harsh behavior in the country weakens its international position. It saves human life. Another important aspect is communication. If in Russia there will be changes, society will give to the reforms two years. During this time we have to rebuild relations with the West. Must be mutual understanding, otherwise these two years will be spent only on what Russia and the West will look at each other.

And with a different leadership in Russia will remain the conflict in the Donbas and the Crimea. How, from your point of view, we need to solve this problem?

— I always explain to our Ukrainian colleagues that politics is the art of the possible. Of course, they can demand the return of the Crimea — and wait for the Russian society will be Mature, which won’t matter who owns the Crimea. But if we want to solve the problem now, then you need to look for compromises, which will be used both Ukrainian and Russian society. Obviously, to demand from the Russian government during the transition period is impossible. At this time, should be decided on domestic issues. Another thing, of course, that armed conflict should immediately cease. But it is not good for Putin. So I still hope that this will happen before the change of government.