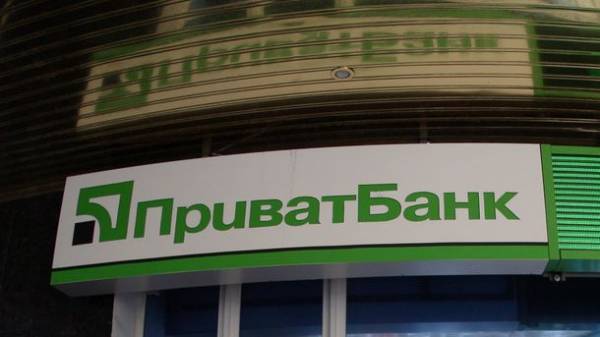 After more than six months after the nationalization of the largest Bank in Ukraine “Privat” – was again in the spotlight. By July 1, 2017, former owners of PrivatBank Igor Kolomoisky and Gennady Bogolyubov had to restructure the debts of the financial institution. But this did not happen.

During and after the transfer of PrivatBank in state property the state budget of Ukraine had to spend a considerable amount. The money allocated to keep “Private” afloat and, as a consequence, to save the entire banking system of Ukraine – the largest bankruptcy of a financial institution would be hit by everyone, explained then in the Ministry of Finance and the NBU.

So, in December 2016 in “Private”, “left” 116.8 billion budgetary hryvnias, then the financial institution capitalize a few more times – for example, recently the Bank has allocated nearly 40 billion hryvnia. In General, calculations of the national Bank, every Ukrainian for “Private” had to pay 3.5 thousand hryvnias from their taxes.

“PrivatBank was rescued by taxpayers’ money – the average cost per each Ukrainian taking into account the planned additional capital injections amount to more than 3.5 thousand hryvnias”, – it has estimated recently the Director of the financial stability Department of the NBU Vitaly vavrischuk.

Every Ukrainian had to pay 3.5 thousand hryvnia for the salvation of PrivatBank

The government had to spend to rescue “Private” almost 6% of GDP, adds the Executive Director of the International Fund blazer Oleg Ustenko.

“When the money was given to related companies, this means that there were serious problems not only with the management of PrivatBank, but there were problems with the supervision of the National Bank, which allowed it to do. To blame not only management, but also those engaged in supervision. If this problem did not arise a year or two ago, and then blame the previous rukovodstvom of the national Bank. This is not a unique problem, it is solvable. The Bank should be as healed and then put up for sale. This question should be closed. Part of the taxpayers ‘ money should return to the Treasury, “–says Oleg Ustenko.

These expenses, the state relied at least partially offset by the restructuring of the accumulated debts of PrivatBank. It is, according to various estimates, about 100-150 billion that the Bank gave related to the shareholder companies without the intention to bring them back – in the opinion of the government, thus, Kolomoisky and Bogolyubov just the money taken out. Themselves former beneficiaries of “Private” all deny these accusations and claim that he acted in the legal field.

At the same time, according to Ustenko, the problem of “Private” is not unique. In addition to the related loans, when the money of depositors, loans were issued to companies related to the owners of the Bank, there is another problem. Due to the sharp devaluation of the hryvnia deteriorated “portfolio” of most Ukrainian banks. Before the crisis of 2014 in Ukraine there were more than 180 banks at the moment – less than 100. However, according to Ustenko, to close the “Private” as 80 other banks, it is impossible.

“This is one of those banks, which are called “to big to fail”, is a systemic Bank, closure of which can lead to the downfall of the entire banking system,” – said the expert.

“I got like the latest Ferrari, to which was attached a huge trailer full of toxic waste”, – shared his impressions of the user “Private” Oleksandr Shlapak

Having dealt with the primary issues of the Bank, the head of “Private” Oleksandr Shlapak has already decided to resign. “Don’t want to engage in “toxic portfolio”… More than 70% of my personal time is devoted to the problems associated with the Bank until 19 December 2016. From the beginning, when I was in Privat, I saw two banks. I got like the latest Ferrari, to which was attached a huge trailer with toxic waste. We are talking about the Bank’s balance sheet and main changes as of 1 January 2017 and 1 June this year. More than 30 billion grow lengthen balance at the expense of assets and liabilities. Major changes – in October the Bank by 900 million hryvnia lost every day, “said he. Shlapak’s statement on the resignation of the Supervisory Board of PrivatBank can be examined at the end of July.

At the moment, the results of the audit of the Bank for international company Erst&Young confirmed the low quality of the loan portfolio of financial institutions – to determine violations of law and fraud analysts are right, this should be dealt with law enforcement.

By the way, according to the General Prosecutor of Ukraine Yury Lutsenko, the GPU, NABU and SAP are investigating several cases related to PrivatBank. As noted Shlapak, has opened criminal proceedings against Kolomoisky and Bogolyubov. “Against the former owners of “PrivatBank” criminal proceedings for bringing financial institutions to insolvency,” – said Shlapak.

During the investigation, state agencies and Kolomoisky already went on the trail of the information war. Immediately after the “deadline” for restructuring to the NBU stated that the government and “Private” have been transferred to the legal foreclosure process. Details of Bank not given, but clearly stated commitments of the ex-beneficiaries was not fulfilled. The Ministry of Finance, in turn, published a letter to the former owners of “Privat”, which was in December of 2016 Prime Minister Vladimir Groisman. As explained in finansovom Department, this letter Kolomoisky and Bogolyubov promised to facilitate the nationalization of the Bank, to restructure loans and not interfere to save the state’s largest financial institution.

Kolomoisky also explained that talks with creditors on restructuring and the process “will continue to be necessary to achieve agreements time.” “In my opinion, the news hype … is due to the ignorance of the representatives of the national Bank about the ongoing negotiation process (which they have no relations)”, – said Kolomoisky. In the comments, “Today,” the NBU said that the negotiations should have been completed before the end of June, which is stated in the eighth section of the Memorandum on cooperation between Ukraine and the IMF.

With the obligation not to impede the state is also having problems – the former owner of “Privat” had already stated that the largest Bank “became a victim of the tyranny of the national Bank of Ukraine” and began to challenge the nationalization in court.

First your forecast on further development of the situation voiced by Prime Minister Vladimir Groisman. The Prime Minister assured – the “Privat” is not in danger. “Stability today PrivatBank threatens nothing. It is absolutely stable Bank,” said Hroisman on the air of ICTV.

“PrivatBank operates smoothly and in a timely manner and in full compliance with all payments and obligations to customers. Today PrivatBank’s liquidity exceeds 17 billion and 800 million US dollars in the equivalent,” confirmed “Today” in the NBU.

Financial analysts agree that the situation around the PrivatBank on clients and the banking sector will not affect. The main question – where to take money on patching the “holes” in the Bank.

“I don’t think that customers now have to worry about anything. There is a question about how to find the resources inside, pulling out borrowers, or outside,” – said Yaremenko

The former Deputy head of the NBU Serhiy Yaremenko, believes that “bad” loan portfolio may affect the liquidity of the Bank. This will determine how much more funds will have to provide for the capitalization of the “Private” from the state budget.

“The Cabinet, as the owner of the Bank, says: “Seek inside”, and inside they are in that state. A guide to the Bank said: “Give money, and then we will understand.” I don’t think that customers now have to worry about anything. There is a question about how to find the resources inside, pulling out borrowers, or outside. Namely, the condition of the Bank, I think nothing bad will. Next nowhere to retreat” says Yaremenko.

Economic expert Alexander Okhrimenko is also certain: the issue of credits is not a problem of depositors. And financial problems, according to the economist, will, as before, to solve at the expense of budgetary funds.

“It’s more a conflict of the old and new owner. The Bank has already public and it will remain so. I think that the former owners might try to get it back, but this probability is very small. For customers there is no danger, everything will work. It used to be solved at the expense of the state budget now, if this situation will be a “hole” in PrivatBank are covered by the state budget,” – says Okhrimenko.

As the expert adds that the former owners of “Privat” is ready to go for the restructuring of the loan portfolio, while the new owner, the state is not going to take this step. “To restructure is not difficult, it is a contract in which the maturity is extended. Now none of the Ukrainian oligarchs can not find such gains to close all loans. The restructuring is a purely technical procedure. I understand that the new owners are not interested in restructuring, so now she’s torn, and in the future on property which is in pledge, the arrest”, – said Okhrimenko.

At the same time, financial analyst Boris Kushniruk thinks that the old owners deliberately did not go for restructuring. “I have no doubt that the former owners don’t restructurizer loan portfolio. Tradition does not give the sum of the past two decades”, – says the analyst.

Kushniruk sure that the opening of criminal proceedings is an attempt to put pressure on former owners and force them to fulfill their obligations. At the same time the expert believes that to prove the connection between “bad” loans, and former owners will be difficult.

“Criminal proceedings – an instrument of pressure on former owners. This is an attempt to force them to comply with the obligations they took on loans that they have committed themselves to restructure. How it would be hard to say. One thing that the national Bank understands what is happening with the loans, which formally are not connected with the former owners, and in fact there is a connection. But on the other hand, the auditor may not see. According to the documents, these structures can be in no way associated with the former owners,” – says financial analyst.

Recall, as stated already long ago in the Ministry of Finance, PrivatBank after stabilization sell. However, according to the expert of RPR Mary Repko, in the next three years will make it virtually impossible attractive asset PrivatBank can not be named.

According to FINANSOVOGO analyst Vitaly Shapran, to sell the Bank to the former owner Igor Kolomoisky, even three years later will be very difficult, as the Bank was declared insolvent, and to buy it after the recapitalization by the state, the businessman will have to obtain a special permit from the national Bank. In view of the Prosecutor’s office open criminal proceedings it may become a serious problem.